WASHINGTON DC — Last week President Obama announced his rejection of the Keystone XL pipeline permit, an act that IER President Tom Pyle called “unconscionable” given the economic consequences. Within the next 24 hours, President Obama’s decision will result in $5 billion eventually going overseas to purchase oil from unstable petroleum regimes, and the amount grows by $70 million per day.

“Since his original delay, President Obama has now ensured that American consumers to spend nearly $5 billion on overseas oil when we could be developing and utilizing our own vast resources in North America. With more than 1.7 trillion barrels of recoverable oil under our soil, we have enough oil to fuel our present needs for the next 250 years,” IER President Tom Pyle noted.

In its analysis, the Institute for Energy Research has scored the economic value of the President’s decision to kill Keystone XL. Consider the following:

Last month, IER released a Keystone XL Pipeline Tracker that provides real time estimates of the dollars that U.S. consumers are forced to send overseas because of the President’s decision: 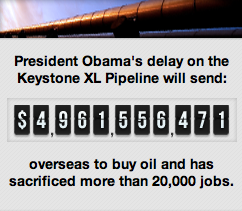 To track the cost of Obama’s Keystone failure, click here.
###