Energy consumption per capita declines by an average of 0.5 percent per year from 2010 to 2035 due to a prolonged economic recovery and improving energy efficiency. Total U.S. population increases by 25 percent from 2010 to 2035, but energy use grows by only 10 percent.

The energy intensity of the U.S. economy, measured as primary energy use per dollar of gross domestic product, is expected to decline by 42 percent from 2010 to 2035 as the result of a continued shift toward less energy-intensive manufacturing and service industries, rising energy prices, and increased energy efficiency. This is a continuation of its historic decline. From 1990 to 2010, for example, energy use per dollar of GDP declined by 1.7 percent per year, primarily because of shifts within the economy away from manufacturing and towards the service sector, which uses relatively less energy per dollar of GDP. 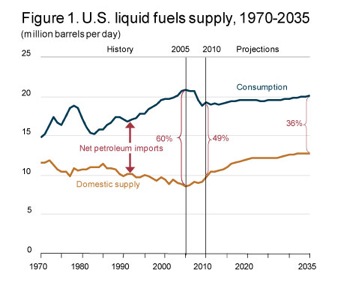 The EIA revised its technically recoverable shale gas estimates downward from those used in its previous outlook.  However, geologists are questioning the new estimates, saying companies move gas from unproven resources to proven reserves.  According to Greg Wrightstone, vice president of geology at Mountaineer Keystone LLC, companies are driven to prove their resources in order to quickly increase their own value.[ii]

Electricity Generation Continues to Shift toward Natural Gas. The natural gas share of electric power generation is expected to increase from 24 percent in 2010 to 27 percent in 2035 due to lower capital costs for natural gas fired capacity and relatively low natural gas prices due to hydraulic fracturing that enables production of abundant U.S. shale gas resources.

Coal’s share of generation continues its historical decline. Over the next 25 years, the projected coal share of electricity generation falls to 39 percent from 45 percent in 2010, because of onerous EPA regulation, slow growth in electricity demand, continued competition from natural gas, and mandated renewable plants. The new EPA regulations also affect old oil and natural gas steam units. EIA expects 10 gigawatts of those units to retire by 2015 and a total of 21 gigawatts of oil and gas steam units to retire by 2035. IER estimated retirements for just 2 of EPA’s regulations to be almost 30 gigawatts, double EPA’s estimates, which are almost certainly an underestimate. 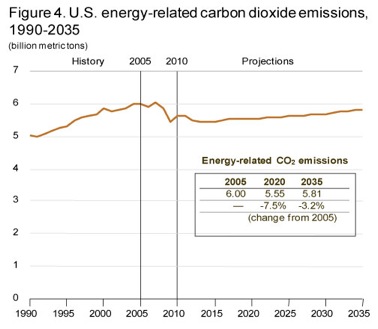 As much as we hear about the rise of renewable energy, coal, oil, and natural gas will continue to provide the lion’s share of our energy for the foreseeable future.