American motorists are breathing a sigh of relief as gasoline prices continue to fall. The average weekly retail price of a gallon of regular gasoline went from an all-time record of $4.11 in early July down to $2.91 last week, a plunge of $1.20 per gallon. In fact, gasoline prices are the cheapest they have been since May of 2007. Surely the politicians who were shedding crocodile tears over the plight of consumers during the period of high prices this past summer are now singing the praises of the marketplace.

As the price of a barrel of crude oil falls from historic highs, the retail costs of home heating oil and gasoline should fall at similar rates, U.S. Sen. Charles Schumer said yesterday.

Schumer (D-N.Y.) called it “shocking” that crude oil has fallen 52 percent from a July high of $144 per barrel, but retail gasoline prices are down 20 percent and home heating oil costs are down 12 percent during the same time period.

Schumer blamed the disparity in price declines on an absence of competition among oil and gas companies and lax oversight from the federal government.

He said he will call on the Federal Trade Commission to conduct a comprehensive survey of home heating oil and gas prices and put out a nationwide warning about companies keeping prices artificially high.

Schumer also said he would put oil and gas prices on the agenda when Congress reconvenes after the Nov. 4 election.

It is always amusing to hear lawmakers rant and rave to businesses on how they are “sticking it” to the helpless consumer. After all, nobody is actually forcing people to hand over their money in exchange for gasoline; despite claims of “addiction,” gas purchases are always voluntary. In contrast, citizens must involuntarily pay for the salaries of government officials, including the ones that don’t represent them.

There are two major problems with Shumer’s complaints. First, it is simply wrong with respect to heating oil, at least using the data provided by the Energy Information Administration (EIA). As Figure 1 shows below, the prices of crude oil and heating oil have moved almost in perfect lockstep. According to EIA, from their peak in early July through mid-October, crude prices have fallen 47 percent while heating oil prices have fallen 45 percent. 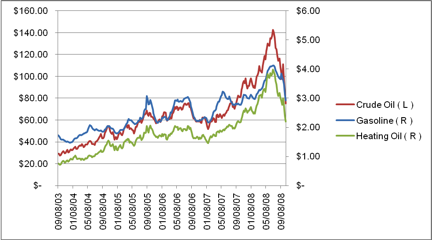 As Figure 1 also makes clear, Senator Schumer’s claims seem to be wrong about heating oil prices; in any event, his claims do not match up with the prices provided by EIA. On the other hand, Schumer is correct that crude oil prices since July have fallen much more (in percentage terms) than gasoline prices. To understand why this might be the case, Figure 1 is unhelpful, because the right axis is “stretched out” to plot the lower gas and heating oil prices against the much higher crude prices. We show a much more useful chart below.

Rather than plotting absolute dollar prices against each other (with different scales on the left and right axes), it is much clearer if we convert the colored lines into their percentage deviations from the five-year average. In other words, in Figure 2 below, we show how much the weekly prices of crude oil, heating oil, and gasoline were above (or below) their average prices over the entire period, expressed as a percentage. 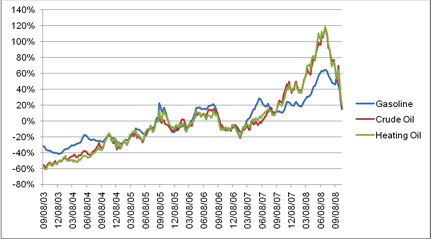 As Figure 2 makes perfectly clear, the percentage changes in crude and heating oil prices have moved almost in perfect lockstep. And it’s true, gasoline prices haven’t fallen as much (in percentage terms) since their July highs, but that’s because they didn’t rise as much as oil did during the run-up phase. That’s the second major problem with Schumer’s analysis: Not only did he get the heating oil statistics wrong, but his accusations against gasoline retailers conveniently left out the fact that they did not raise the pump price to keep pace with rising crude costs. (In other words, in Figure 2 the red line shot up much higher than the blue line into July, and so it naturally didn’t fall as much since then.) That’s funny; we don’t remember Senator Schumer complaining that the “anti-competitive” gasoline industry wasn’t raising prices quickly enough last winter and spring, do you?

As both charts above illustrate, gasoline and heating oil prices systematically follow crude prices. Of course, there are other factors affecting end-user prices besides the cost of crude; for example, if refiners are hit by a hurricane, or if they are switching from one seasonal blend to another, there can be short-term gaps. As Figure 2 shows, gasoline retailers did not raise their prices to keep pace with crude price hikes starting in 2007, perhaps because they were concerned about anti-“gouging” penalties. Most likely, gasoline retailers let their profit margins shrink, rather than anger customers with even higher prices. Naturally then, once the tide turned on oil prices—helped in part by the lifting of the bans on offshore drilling—gasoline retailers have reduced their prices more conservatively.

In spite of the claims by many elected officials to the contrary, there is tremendous competition in the oil and gas industry, particularly when it comes to retail stations serving individual motorists. And year after year, studies by the Federal Trade Commission and other government agencies have found no evidence whatsoever of harmful price manipulation. Instead of threatening private business as they slash prices and serve their customers, government officials should be thanking them.