The interesting aspect relating to the price data is that the spread between the price of West Texas Intermediate crude oil and Brent crude oil has narrowed, averaging $3 per barrel for the month of July from an average of $18 per barrel in 2012. The reason EIA cites for the narrowing of the spread is: “The strong demand for light, sweet crude oil in the Midwest and new pipeline capacity to deliver production from the West Texas Permian Basin directly to the Gulf Coast contributed to the price of West Texas Intermediate rising relative to Brent crude oil.” 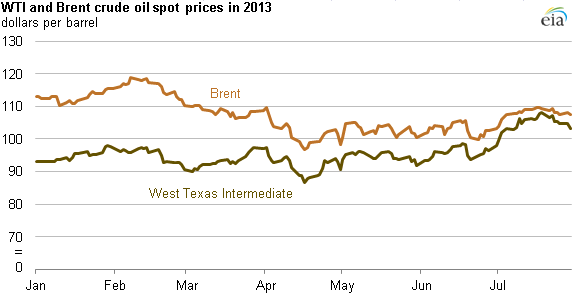 The spread had reached wide levels in 2012 as increasing oil production from North Dakota and Texas outpaced the ability of the existing pipeline infrastructure to bring that oil to refineries on the Gulf Coast. As a result, shippers had to turn to more expensive modes of transport (railroads and trucks), causing the price of inland domestic oil to decrease to account for the increased shipping costs.

Thus, EIA is indicating that the increased pipeline capacity is no longer keeping domestic crude oil land locked at the terminal in Cushing, Oklahoma.  Several new pipelines and crude-by-rail terminals came on line in early 2013.[ii] The new pipelines, which are less expensive than rail and truck, have supplied domestic crude oil to Gulf Coast refineries without incurring the higher shipping costs. And, according to EIA, it has been the relief of the bottlenecks that has enabled domestic light sweet crude oils that are of similar quality to Brent crude to displace some U.S. oil imports, in turn keeping Brent crude oil prices low. [iii]

EIA expects the price difference between West Texas Intermediate and Brent crude to widen to $6 per barrel by the end of 2013 as oil production in the United States and Canada increases. 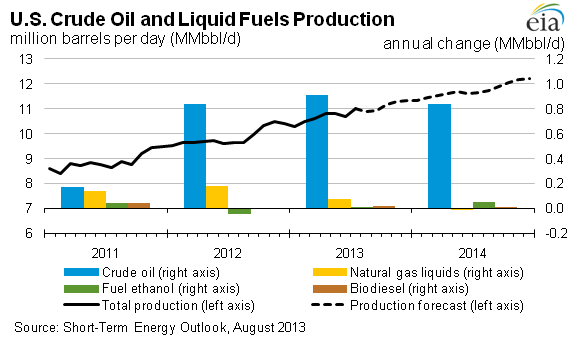 Production increases of crude oil are helping the United States to lower its oil imports to levels not seen in 3 decades. These increases are primarily on private and state lands where permitting takes significantly less time than on public lands that are administered and regulated by the federal government. Further, new technology such has hydraulic fracturing coupled with directional drilling has brought additional production that was unattainable just a decade ago. Obviously, this is good news for U.S. consumers.

Besides the pure benefits of increased production to the energy system and our economy, U.S. oil prices are having a dampening effect on North Sea Brent crude oil prices. This occurred once the bottleneck at the terminal in Cushing, Oklahoma was alleviated when new pipelines came on line earlier this year. According to EIA Administrator, Adam Sieminski, “the boom in U.S. oil production is helping to hold down global oil prices, and so is benefiting American consumers. Greater U.S. exports would actually help keep domestic prices lower by enhancing the global trend.”[v]

Imagine the effect even more production could have on world oil prices if the Keystone Pipeline could bring additional crude down from Canada and North Dakota or if the federal government reversed course and followed the lead of the states in regulating oil and natural gas production instead of working to restrict development.