“The United States consumes more than 20 percent of the world’s oil, but we only have 2 percent of the world’s oil reserves — 20 percent we use; we only produce 2 percent.  And no matter what we do, it’s not going to get much above 3 percent.  So we’re still going to have this huge shortfall.  That’s why if we really want energy security and energy independence, we’ve got to start looking at how we use less oil, and use other energy sources that we can renew and that we can control, so we are not subject to the whims of what’s happening in other countries.”

The Energy Information Administration (EIA) recently updated its oil and natural gas reserve numbers and found large increases. As of the end of 2011, crude oil and lease condensate proved reserves totaled 29.5 billion barrels, 3.8 billion barrels higher than their level at the end of 2010. This was a 15 percent increase and the highest level since 1985. Crude oil proved reserves totaled 26.5 billion barrels, a 3.3 billion barrel increase (14 percent) from 2010 levels, and the highest level since 1988. EIA reports that 2011 was the second consecutive year that crude oil reserve additions set a volumetric record.[i] 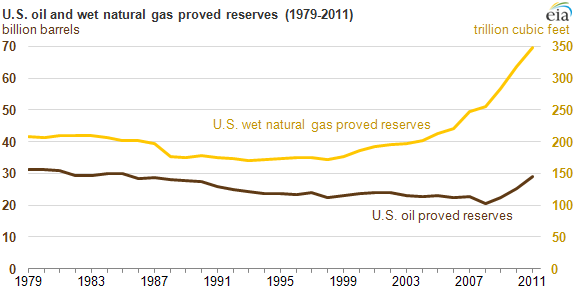 Among the states, Texas recorded the largest increase in proved oil reserve because of the continuing development in the Permian Basin and the Eagle Ford shale oil formation in the Western Gulf Basin. North Dakota recorded the second largest increase because of shale oil development in the Bakken formation in the Williston Basin. Proved reserves in tight oil plays contributed 3.6 billion barrels (13 percent) of total proved reserves of crude oil and lease condensate in 2011.

The Good and the Bad News

These higher reserve levels are clearly the good news for the U.S. Onshore U.S. oil production is booming and American production is now rising faster than any time since the 1950s. Forecasters are projecting that the United States will become the world’s largest oil producer within this decade.

Unfortunately, the bad news is that accessibility to these reserves is costing more in production costs. The cost to get newfound oil from remote locations and tightly packed rock is high and increasing. Further, it takes years and billions of dollars to get new production projects developed and producing. The new oil being found and produced is located in ultra-deep ocean waters, in sands that must be heated to release the hydrocarbons, or in shale or other tight rock that requires constant drilling to keep production at steady levels. Because the oil is thinly dispersed and hard to squeeze out, dozens of wells must be systematically drilled over an area to get to the oil. That makes this new oil far more expensive to get out of the ground than conventional oil.

Oil companies are developing new oil fields at some very high costs. For example, Exxon plans to develop a large field called Julia in the Gulf of Mexico that will cost $4 billion to develop. Although Julia was discovered in 2007, it will not be able to produce until 2016 due to permitting and exploratory drilling. Chevron is developing three fields in the Gulf of Mexico, where drilling began in 2003, and where production will begin next year at a cost of $16 billion.

While improved technology is reducing some costs, the cost reductions are being countered by higher costs to lease equipment, buy supplies and pay workers that are shrinking profits. Profits are shrinking for all the major oil companies. For example, Royal Dutch Shell indicated that its profits fell 57 percent, primarily due to a write-down of the value of the leases on U.S. land that the company thought held large amounts of oil. Shell indicated that it plans to sell stakes in four or five of the nine regions where it has holdings because it has not been able to obtain as much oil as it had originally thought. Shell is also abandoning plans to increase production to 4 million barrels per day by 2018 from its current rate of 3 million barrels per day.

ExxonMobil, the world’s biggest investor-owned company, indicated that profits fell to their lowest level in more than three years. Oil production dropped 1.9 percent, the 9th straight quarter production has declined compared with a year earlier, and its refining operations had a poor financial showing with lower production volumes and lower margins. BP reported a production decline of 1.5 percent and indicated production in the third quarter would also fall and costs would increase. [iii]

U.S. oil and natural gas proved reserves have increased substantially, but production costs are rising, particularly to get to the unconventional sources of oil in tight formations or in oil sands. As a result, oil company profits are shrinking. On top of all this, President Obama is looking to change the tax code and eliminate tax deductions for oil and gas companies that will make our crude oil and gasoline prices even higher.

[i] Energy Information Administration, Proved reserves of crude oil and natural gas in the United States up sharply in 2011, August 1, 2013, http://www.eia.gov/todayinenergy/detail.cfm?id=12351