The Energy Information Administration (EIA) reports that the China is expected to surpass the United States in oil imports this October and to lead the world in total oil imports in 2014.[i] As the graph below shows, the United States, on a net basis (imports less exports), has decreased its net oil imports fairly dramatically over the last several years. There are several reasons for this decline. Most importantly, U.S. oil production is up. But, other reasons include increased exports of petroleum products, lower or flat liquid fuels demand, and biofuels production that has generally been increasing. China, unlike the United States, has a heavily growing demand for petroleum products and much lower production growth. 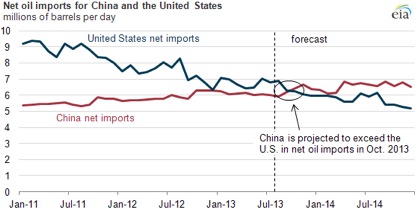 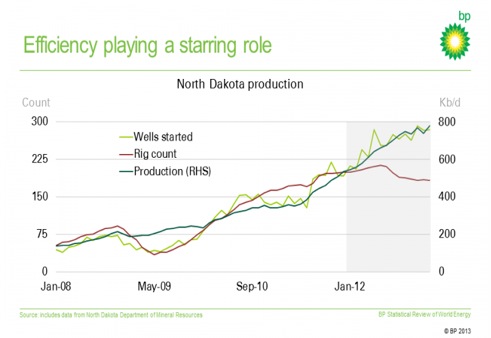 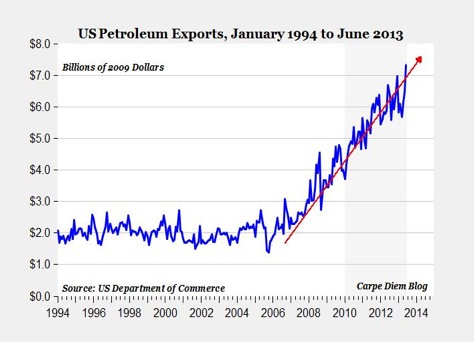 The U.S. success story is not an accident. Clearly, we have a large technically recoverable resource base and a competitive environment where oil companies are encouraged to take a risk. On private and state land, where this growth is taking place, state regulation allows for increased production and protection of the environment. That coupled with prices high enough to cover development and production costs have created an environment conducive to increased oil production.

Increased oil production with flat or declining liquids fuel demand has resulted in lower net imports and increased liquid fuel exports. These petroleum exports are helping President Obama’s goal to double total U.S. trade exports between 2010 and 2015. But, even with booming fossil fuel exports, it does not look like President Obama will attain his export goal. U.S. exports totaled $1.6 trillion in 2009 and increased by only $600 billion over the next three years (less than 40 percent); they totaled $2.2 trillion in 2012.[iv]

Increased oil production, decreased petroleum imports, and increased petroleum exports are all due to the shale oil revolution in the United States, which has been one of the major bright spots in U.S. energy supply and American technology.

[ii] Business Insider, The US is well on its way to replace Saudi Arabia as the world’s largest oil producer, August 9, 2013, http://www.businessinsider.com/us-to-replace-saudi-arabia-as-largest-oil-producer-2013-8