Last week, the Energy Information Administration (EIA) released its report on lifting the oil export ban and found that it would not result in higher gasoline prices, but would instead keep them the same or lower them slightly. EIA stated, “Petroleum product prices in the United States, including gasoline prices, would be either unchanged or slightly reduced by the removal of current restrictions on crude oil exports.”[i] According to EIA, if the price spread between West Texas Intermediate (WTI) and Brent crude oil exceeds $6 to $8 a barrel, elimination of the ban on U.S. oil exports would result in higher wellhead prices for crude oil, encouraging more production. Specifically, in EIA’s projected scenarios where the price spread is higher than $6 to $8 per barrel, the United States exports as much as 3.6 million barrels of crude oil per day in 2025. In addition, the U.S. produces as much as 0.5 million barrels a day more crude oil in that year, compared to the projection assuming the export ban stays in place. As more crude oil gets exported, however, less refined petroleum products are exported. The EIA projections support our previous IER posts in which we explained how allowing domestic producers to export crude oil could actually lower gasoline prices for Americans.

EIA considered four scenarios in its report. The reference case is the same as in the Annual Energy Outlook 2015. In that case, U.S. crude oil production increases to 10.28 million barrels a day in 2025 and stays at that level, whether or not the restrictions on oil exports are lifted. Crude oil prices show little difference, remaining around $90 a barrel for Brent and $84 a barrel for WTI whether or not the ban is lifted and the spread between WTI and Brent remains around $6 a barrel. The projected price of gasoline is around $2.90 a gallon, regardless of whether the export ban is lifted.

In the low oil price scenario, U.S. oil production in 2025 remains equal to current oil production of around 9.5 million barrels a day whether or not the export ban is lifted. The price of crude oil is projected to be around $63 a barrel for Brent regardless of the ban, and the price spread between Brent and WTI is around $5.50 a barrel, making the WTI price around $57.50 a barrel. Gasoline prices are estimated to be $2.37 a gallon, with or without the ban.

Although the reference case and low oil price scenarios do not attribute much impact to the oil export ban, in the other two scenarios the policy does make a difference. Specifically, EIA considered two cases that assume high oil and gas resources where the technically recoverable resource base is assumed to be 50 percent higher and the economic ultimate recovery factor is also assumed to be 50 percent higher than in EIA’s reference case. In the high oil and gas resource case, lifting the ban increases daily U.S. production by 470,000 barrels a day in 2025 with total production at 14.10 million barrels a day. If the ban remains in place, a barrel of Brent crude oil is projected to cost around $81.40, almost one dollar more per barrel than if the ban were lifted. The spread between Brent and WTI oil drops by almost $7 a barrel, from $15 a barrel to about $8.20 a barrel. A gallon of gasoline costs around $2.65 in this scenario with the ban lifted and a cent more when the ban is in place. The United States exports 3.64 million barrels per day of crude oil—2.45 million barrels per day more than if the ban remained in place. Refiners, however, export 1.76 million barrels per day less petroleum products than if the ban remained in place.

Note that EIA assumes that current laws and regulations allow for unlimited exports of petroleum products, but require licensing of crude oil exports. As a result, the EIA analysis includes exports of crude oil to Canada, which are presumptively granted licenses, exports of crude oil from Alaska’s North Slope, re-exports of foreign-sourced crude, and certain exports from California. Also, because recent rulings by the U.S. Department of Commerce’s Bureau of Industry and Security have indicated that condensate processed through a distillation tower is a petroleum product and is exportable without a license, these exports are also included in EIA’s analysis without needing the ban to be lifted. Through the first five months of 2015, crude oil exports from the United States averaged 491,000 barrels per day and exports of processed condensate averaged of 84,000 barrels per day.

The crux of EIA’s analysis is based on its assumptions, which drive the results of the study. One of the most important is the following statement by EIA: “A Brent WTI spread in the $6/b–$8/b range is consistent with the costs of moving WTI from Cushing, Oklahoma to overseas markets where it might compete with Brent.” It is because the agency sees the cost of transportation being between $6 and $8 per barrel that there are no additional exports in the reference case and no additional production once the ban is lifted. EIA assumes that WTI would be shipped from Cushing, OK to the Gulf Coast at a pipeline charge of $4 to $5 per barrel, loaded on a ship at a cost of $1 per barrel and then shipped to Europe at a charge of $2 per barrel. However, it is more likely that a tanker would be used to export crude oil from Houston or Corpus Christi, using oil produced in the Permian Basin (e.g. Eagle Ford) with a transportation tariff of $2 per barrel — less than half the EIA assumption of moving the crude from Cushing to Louisiana. Also, if the pipeline is not full, the tariff may be negotiated to be less. Thus, EIA’s $6 to $8 assumption could in fact be high by a factor of 2. If that assumption were halved, it is likely that the reference case would show additional oil production and crude oil exports when the ban is lifted.

Note that before there was surplus crude that the United States could not use or export, WTI was actually priced slightly above Brent crude prices (prior to 2009). However, that changed when oil production in the United States increased. According to Bloomberg, the price difference between WTI and Brent crude averaged $5.70 so far this year and $6.64 last year after three years in double digits.[ii] While the price difference has been in Brent’s favor in recent years, it could go back to WTI’s favor depending on the dynamics of the international oil market if the ban were to be lifted. 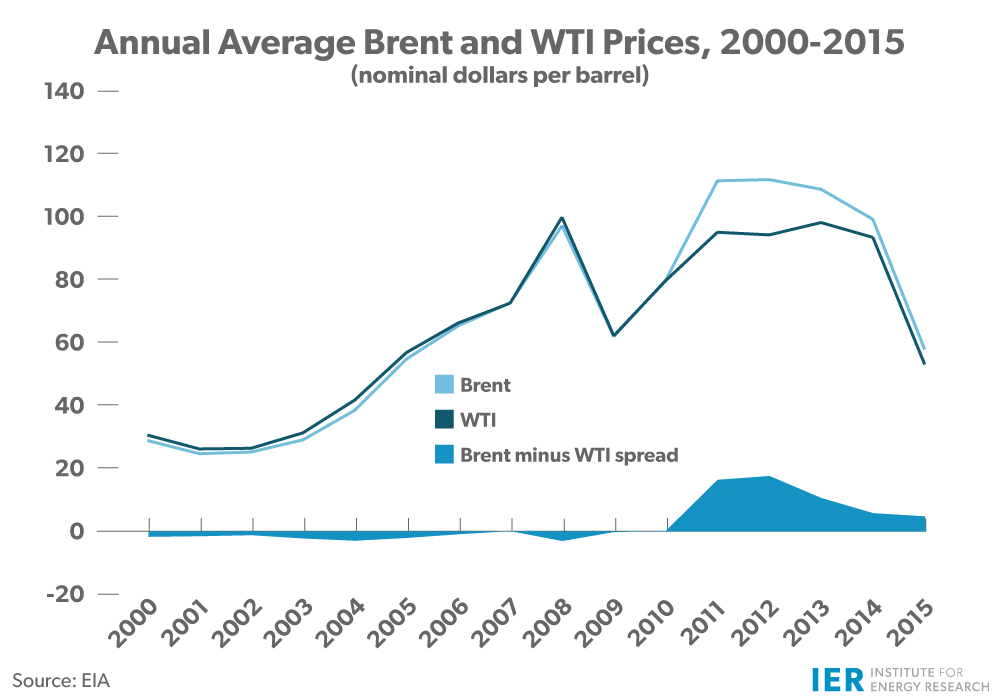 Another assumption that EIA makes is that the high utilization rates of domestic refiners will continue, utilizing the increasing domestic oil production and taking advantage of low cost natural gas as a fuel and feedstock. The combination of increased refinery utilization rates and increased processing capacity has been the major way that the growth in U.S. crude production has been accommodated since 2009. EIA incorporates the splitter investment plans that have been announced and further investments to debottleneck existing refineries in its analysis, which contribute to projected increases in total distillation capacity. U.S. refiners, however, may be reluctant to add significant refining capacity depending on their ability to obtain air permits and the finalization of the requirements for the new proposed ozone rule, which is not assumed in EIA’s analysis.

EIA provides the results of its analysis for 2015 and 2020 in its full report. In 2020, the results are similar to those in 2025, but, of lower magnitude. The curious result is for 2015 where the reference case and lower oil price cases do not show additional crude oil exports despite the full oil storage tanks currently in the United States.

Results of Other Studies

According to IHS Global Inc., lifting the oil export ban and allowing free trade will increase U.S. oil production, on average, by 1.2 million barrels per day in its base case and 2.3 million barrels per day in its potential production case between 2016 and 2030. By increasing global supplies, the lifting of the ban will result in lower global oil prices, which in turn will lower prices at the pump—reducing the domestic gasoline price by 8 cents a gallon. The savings for motorists would be $265 billion over the 2016 to 2030 period. In the base case, the higher U.S. oil production would create at its peak at almost 1 million jobs, increase GDP by $135 billion, and increase per household income by $391. On average, employment would be greater by 394,000 jobs. The nation’s oil import bill would be reduced by $67 billion per year– a 30 percent reduction from 2013.[iii]

According to the Brookings Institute, lifting the oil export ban lowers gasoline prices by increasing the total amount of crude supply. In the reference case, the decrease in gasoline price is estimated to be $0.09 per gallon in 2015. If oil supplies are more abundant than currently expected, the decline in gasoline prices will be larger ($0.07 to $0.12 per gallon) and will continue throughout the model horizon (2015 to 2035). In its high oil supply case, the United States would be able to increase exports by 2.8 million barrels per day in 2015 and 5.7 million barrels per day in 2035, as long as OPEC maintains the price of oil and cuts crude exports. In this case, the Gulf Coast would produce an additional 1.5 million barrels per day in 2015 if the ban was lifted. Lifting the ban by 2015 reduces unemployment in the reference case at an average annual reduction of 200,000 from 2015 to 2020.[v]

[iii] IHS Global Inc., US Crude Oil Export Decision Assessing the impact of the export ban and free trade on the economy, May 2014, http://oilexports.com/wp-content/uploads/2015/01/IHS_Energy_0514_US_Crude_Oil_Export_Decision.pdf