President Obama recently announced the final version of his so-called “Clean Power Plan,” which requires states to slash carbon dioxide emissions from existing power plants. This regulation is the centerpiece of the president’s “climate action plan,” which is designed to eliminate the use of coal—and eventually, natural gas. To work toward the president’s climate agenda, the administration projects the U.S. will add massive amounts of wind and solar energy over the coming decades. In fact, the EPA mandates subsidized wind developers to add more electrical capacity to the grid in eight years than the industry did in the previous 118 years.

The wind industry will reach this goal, according to EPA, by adding as much new capacity each year for six years as was added in 2012. That was the year the wind industry rushed to bring more projects on-line to qualify for an expiring federal subsidy, the wind Production Tax Credit. The following year, after the PTC lapsed, new wind additions collapsed more than 90 percent. 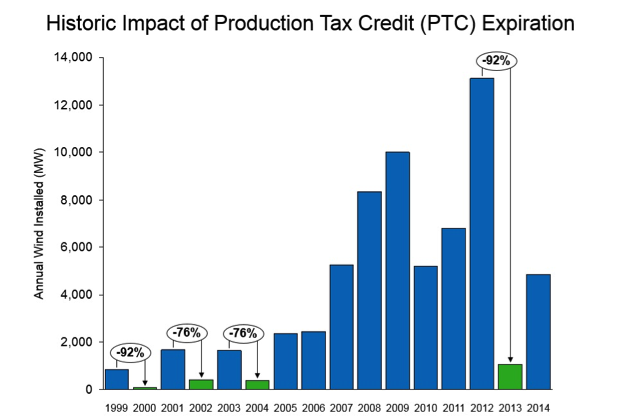 This shows how subsidies such as the wind PTC (which if extended, would cost taxpayers $10 billion over the next decade) are crucial to Obama’s climate agenda. In fact, his agenda depends not just on an extension of the PTC, but also on the boom-and-bust cycle created by uncertainty over whether Congress would extend the PTC. As history shows, only the threat of losing subsidies could convince wind developers to install as many turbines in one year as the president expects to be built every year for six years to meet the goals of his carbon rule. Therefore, Obama’s climate agenda depends on the wind PTC to hide the true cost of the overall program from ratepayers.

Congress will debate the wind PTC this fall in a tax extenders package. Once again, lawmakers will have the opportunity to finally put an end to a special-interest handout that increases electricity prices, harms taxpayers, and is central to President Obama’s energy legacy. By rejecting the wind PTC, Congress can protect American families from wasteful subsidies and from the harmful effects of the president’s anti-energy agenda.

On August 3, President Obama unveiled the finalized “Clean Power Plan,” or carbon dioxide regulation. The president hailed the rule as a “historic step” and central to his climate agenda. The rule requires states to reduce carbon dioxide emissions from existing power plants by 32 percent from 2005 levels by 2030. The final rule is even stricter than the proposal, which contemplated a 30 percent cut by 2030. NERA Economic Consulting put the price tag of the proposed rule at $366 billion, with residents in 43 states seeing double-digit percentage increases in their electric bills. The final rule, which mandates more severe cuts, will inflict even more harm, especially on low-income households.

To justify the stricter emission cut in the final rule, EPA expects the U.S. to add massive amounts of renewable energy, especially wind power. The problem with relying on wind energy is that it depends on government mandates and subsidies, one of which is the wind PTC. Enacted in 1992, the PTC pays wind developers for each kilowatt-hour of electricity generated for 10 years. The Senate estimates a two-year extension of the PTC would cost taxpayers about $10 billion over the next decade.

Though the PTC’s future is always in limbo—it has expired nine times in the last two decades—the PTC is an important element of the president’s climate agenda because it makes the agenda seem less expensive than it really is.

Consider the following chart taken directly from EPA showing renewable energy (RE) capacity additions by source. To predict future wind growth, EPA looked at how much capacity wind added between 2010 and 2014. The high point was 2012, the year before the wind PTC temporarily expired. As uncertainty over the PTC loomed, wind developers rushed to bring new projects on-line to qualify for the subsidy. This is why wind added more than twice as much capacity in 2012 (13 GW) than in any of the other years. The following year, after the PTC expired, wind additions dropped by more than 90 percent, from 13.1 GW to just 1 GW.

EPA’s final rule expects wind will add as much new capacity each year from 2024-2030 as the industry did in 2012.[1] The agency also expects wind will add 6.2 GW each year for 2022 and 2023, bringing total capacity additions to over 91 GW in 2030. This prediction is unrealistic without a federal mandate to construct renewable technologies. As explained above, the reason wind added 13 GW in 2012 was because developers were scrambling to qualify for the expiring PTC and weren’t sure whether Congress would extend it. The next year the market for wind energy collapsed because the PTC wasn’t available. Therefore, 2012 was an aberration created by government uncertainty. The so-called “Clean Power Plan,” however, is mandating the construction of wind and solar technologies to replace retiring fossil fuel (coal, oil and gas) generators. The cost of this mandate can either be passed entirely to consumers, or it can be hidden by subsidies such as the PTC.

To estimate the feasibility of constructing the amount of wind turbines needed to replace retiring fossil-fuel generators, EPA used 2012 numbers to predict future wind additions. To understand why this is a huge amount, consider the following chart. It shows approximately how much wind capacity has ever existed in the U.S. compared to how much wind capacity Obama expects to add in just eight years to justify his carbon regulation. (Industrial wind development can be traced as far back to a 1897 advertisement in Harper’s New Monthly Magazine.) As you can see, EPA projects wind will add more capacity in eight years than the industry did in the previous 118 years: 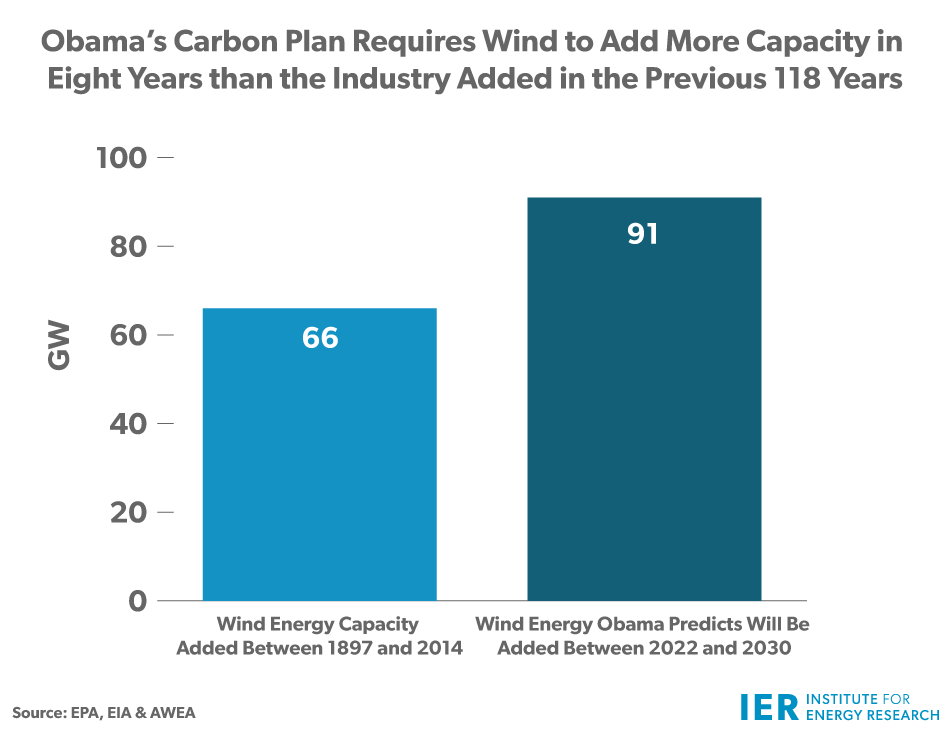 EPA expects wind capacity additions will total more than 91 GW between 2022 and 2030. For context, total installed U.S. wind capacity was just under 66 GW at the end of 2014, according to the American Wind Energy Association. This growth is not driven by market demand, but by state mandates and government subsidies, of which the PTC is an important one of many. Others include the 2009 federal stimulus, which gave wind developers the choice of taking a Section 1603 cash grant in lieu of the PTC. The Treasury Department estimates this program awarded almost $13 billion in subsidies to wind developers between 2009 and 2014.

The wind Production Tax Credit is a key piece of President Obama’s climate legacy. It helps make the “Clean Power Plan” appear less costly and more achievable than it actually is. To work toward the president’s climate agenda, his carbon dioxide regulation requires the wind industry to add more electrical capacity in eight years than the industry added in the previous 118 years. The only time wind added anywhere near as much as Obama predicts was in 2012, when rent-seekers rushed to build turbines ahead of state mandates due to uncertainty over whether Congress would extend the wind PTC. The following year, without the PTC, new wind additions collapsed.

Therefore, the president’s climate agenda doesn’t just live-or-die on subsidies like the wind PTC, but also depends on the boom-and-bust cycle created by government dysfunction around whether to keep the subsidies flowing. Congress should end this madness once and for all by refusing to revive the wind PTC in any tax extenders deal. That would eliminate welfare for wind lobbyists and help protect the American people from part of President Obama’s costly climate agenda.