The Energy Information Administration (EIA), the independent statistical agency in the U.S. Department of Energy, released their reference case forecasts from the Annual Energy Outlook (AEO) 2011 last week. The AEO contains projections of U.S. energy supply, demand, and prices through 2035 and serves as a base line for government and industry projections of future energy policies. While some forecasters are turning toward more carbon-free fuels in the future, the EIA still expects fossil fuels to supply over three quarters of the energy consumption in the United States in 2035.[i] The share of fossil fuels is expected to decline only 5 percentage points from 83 percent in 2009 to 78 percent in 2035. Even with this large share of fossil fuels, energy-related carbon dioxide emissions are still below 2005 levels in 2020, by 3.4 percent, and they are not expected to exceed 2005 levels until 2027. 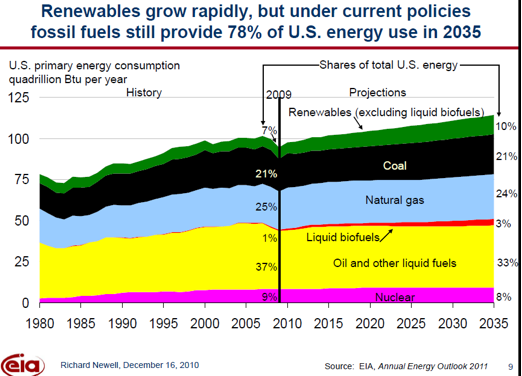 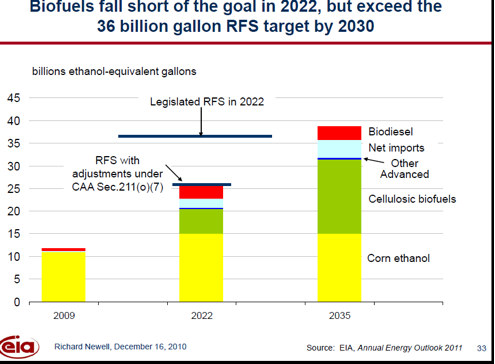 Under the assumption of current laws and regulation, the EIA expects fossil fuels to dominant the energy market in 2035, providing 78 percent of our energy consumption. This means that despite large subsidies and set-asides, the EIA projects that renewables will only increase their share of our energy consumption by 5 percentage points over the next 25 years. The forecast also indicates that the United States can produce 82 percent of its energy requirements in 2035 domestically. But to do that, we need all sources of energy and will need to continue to drill for and produce oil, onshore and offshore, and use hydraulic fracturing to produce natural gas from shale deposits. To support this forecast, the Obama Administration needs to reverse its current slow pace of awarding drilling permits and moderate new requirements on offshore drilling. Without these changes, we will be subject to having to import more energy and be at the mercy of foreign governments. And, increasing federal and state regulation regarding hydraulic fracturing of natural gas production will result in less gas produced domestically and increased dependence on liquefied natural gas imports. As this forecast shows, we clearly have sufficient domestic energy to reduce imports to 18 percent in 2035. We just need to be able to produce it.