California’s energy/climate policy is the very one championed by Enron and Ken Lay from 1988 until the company’s demise in late 2001. How ironic, because Enron was at the center of California’s electricity crisis of 2000/2001, a multi-month series of rate hikes and rolling blackouts that disrupted many lives in the state and cost billions of dollars.

Higher rates and less reliability—let’s compare California and Enron when it comes to wind power, solar power, and cap-and-trade. 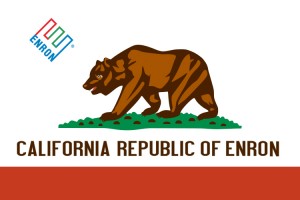 Beginning in the 1970s, California has been the nation’s leader in government subsidies and mandates for wind and solar. Today, the state produces more non-hydro renewable energy than any state in the union except for Texas (which, per Enron, enacted a strict renewable-energy quota in 1999).

In 1995, Enron purchased a one-half interest in (and operated) Solarex, the second largest U.S. manufacturer of photovoltaic cells. Late the next year, Enron became the nation’s windpower leader by purchasing Zond Corporation of Tehachapi, California. Together the two formed Enron Renewable Energy Corporation, the centerpiece of Ken Lay’s plan for Enron to become the world’s leading renewable energy company.

But wind and solar are uneconomic energies compared to other forms of grid power. And they are intermittent (ie. the wind doesn’t always blow and the sun doesn’t always shine) and thus of dubious quality compared to firm, dispatchable energies (ie. power sources that you can turn on and off) such as that from fossil-fuel power plants. Despite much government favor, Enron lost money each year with both its solar and wind investments. California ratepayers and U.S. taxpayers are losing money too with wind and solar.

Regarding climate policy, California’s political leadership and intelligentsia are promoting Enron’s much beloved program. The Air Resources Board recently approved cap-and-trade as an option to reduce greenhouse gas emissions. (For an overview of the state’s whole climate sausage, see the California Climate Change Portal and Robert Michaels’s critical report, California’s Climate Policy: The Present and Future of AB 32.)

Enron had seven profit centers tied to carbon dioxide (CO2) pricing. One remembers the infamous memo from an Enron lobbyist back in 1997 from Kyoto, Japan.

“If implemented, [the Kyoto Protocol] will do more to promote Enron’s business than will almost any other regulatory initiative…. The endorsement of [CO2] emissions trading was another victory for us…. This agreement will be good for Enron stock!” (emphasis added)

Will California’s cap-and-trade regulations be gamed like its electricity regulations were by Enron traders some years ago? California’s poorly conceived regulatory framework invited Enron’s hundred West Coast traders to create opportunistic strategies (with names like “Death Star,” “Get Shorty”, and “Ricochet”) to manipulate supply and drive prices up. Partly as a result of the regulations, and Enron’s manipulations, wholesale electricity prices shot up over 800 percent from April 2000 to December 2000, and the state suffered large-scale blackouts.[1] In total, the crisis cost over $40 billion.[2]

Enron’s traders knew what they were doing. “We all did it,” one trader remembered.

We talked about it openly. It was the school yard we lived in. The energy markets were new, immature, unsupervised. We took pride in getting around the rules. It was a game.[3]

We will see how California’s forthcoming regulations play out. But what we now know is this. California is following Enron’s energy/climate policy, and such policy points the state in one direction: higher prices and less reliability.

[3] Quoted in Bethany McLean and Peter Elkind, The Smartest Guys in the Room: The Amazing Rise and Scandalous Fall of Enron. New York: Portfolio, 2003, p. 275.

The True Cost of Green Jobs