Norway, Denmark, and the United Kingdom awarded licenses for offshore drilling, mainly in the North Sea, to oil and gas exploration companies, guaranteeing jobs, resources and economic prosperity to those countries. Rather than following in their footsteps, the Obama administration is canceling lease sales in U.S. waters. It has canceled lease sales offshore in the Atlantic and while its 5-year lease plan currently includes lease sales in Cook Inlet and in the Beaufort and Chukchi Seas in the Arctic, they may not proceed as well. President Obama and Prime Minister Trudeau of Canada announced that any future oil and gas exploration in the polar region “must align with science-based standards between the two nations that ensure appropriate preparation for operating in Arctic conditions, including robust and effective well control and emergency response measures.”[i] A Clinton or a Sanders administration almost certainly will claim this precludes any lease sales from coming to fruition in the Arctic.

Earlier this year, Norway’s Ministry of Petroleum and Energy offered 56 exploration licenses on the Norwegian Continental Shelf (NCS) in the North Sea (27), the Norwegian Sea (24) and the Barents Sea (5) to 36 different oil companies.[ii] Just last week, the Danish Energy Agency awarded 16 oil and gas exploration licenses to 12 companies as part of the country’s seventh licensing round.[iii] The UK Oil and Gas Authority awarded 41 new licenses in July 2015 in addition to the 134 confirmed in November 2014 to make its latest Offshore Licensing Round one of the largest rounds in the five decades since licensing first took place in 1964.[iv]

According to Andrea Leadsom, the UK Energy Minister, “We are determined to make the most of our North Sea resources to provide secure, reliable energy for hardworking families and businesses and reduce our reliance on volatile foreign imports. We are backing our oil and gas industry which supports hundreds of thousands of jobs across the UK. The 28th offshore licensing round comes after the Government announced a major package of support in March to encourage £4 billion of additional investment in the North Sea which will prolong the life of this vital industry.”

In contrast, the Obama Administration abandoned its plan for oil and gas drilling in Atlantic waters last month, supposedly due to opposition from the Pentagon and environmentalists in coastal communities. Sally Jewell, the Secretary of the Department of Interior, made the announcement to bar drilling across the mid-Atlantic seaboard, reversing President Obama’s claim a year ago that he would open up the East Coast to oil and gas exploration in its 5-year drilling plan from 2017 to 2022.[v]

According to Secretary Jewell, Virginia, North Carolina, South Carolina, Georgia and Florida would remain off-limits for drilling until 2022, when hopefully the Obama Administration will no longer be deciding the outcome for drilling off the coast of these states. The Southeastern states realize that oil and gas exploration would bring high-paying jobs and energy self-sufficiency. The delay until the next 5-year plan is unfortunate for Americans because it is a lost opportunity for the United States to continue to supply affordable energy, since it takes onward of ten years to develop oil wells for production. Thus, a 5-year delay is monumental.

It is not clear how much oil and gas could be produced off the U.S. East Coast because existing data is from the 1970s and 1980s, when energy companies drilled 51 wells in the region. The Interior Department estimates 3.3 billion barrels of oil and 31.3 trillion cubic feet of natural gas could be recovered from the Atlantic offshore.[vi] 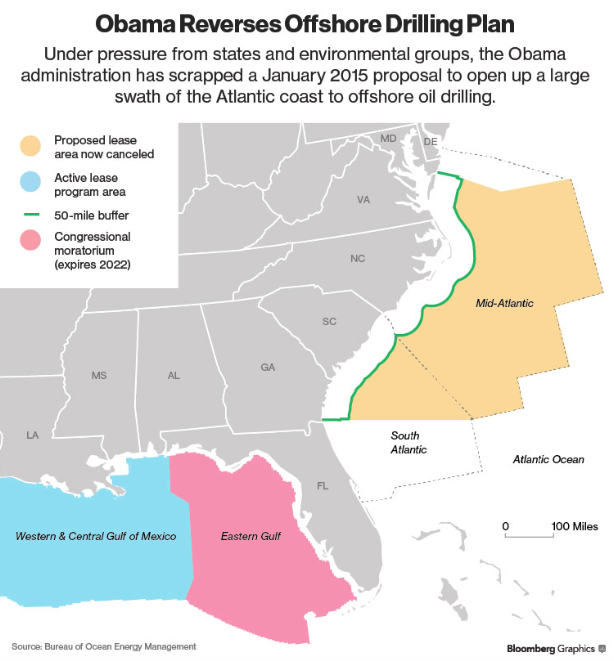 The Obama Administration’s 5-year offshore lease plan tentatively includes lease sales in Cook Inlet and in the Beaufort and Chukchi Seas in 2020 and 2022, despite oil companies withdrawing their permits for drilling there and President Obama promising to end all offshore Arctic oil drilling this past September.[vii] According to Secretary Jewell, “the Arctic is a unique place of critical importance to many, including Alaska Natives who rely on the ocean for subsistence. As we put together the final proposal, we want to hear from the public to help determine whether these areas are appropriate for future leasing and how we can protect environmental, cultural and subsistence resources.”[viii]

These negative overtones as well as President Obama’s and Prime Minister Trudeau’s statements put a damper on the prospect that these lease sales will come to fruition, despite Alaska desperately needing the revenue. In the past, Alaska relied on revenues from its North Slope oil fields to underwrite up to 90 percent of the state’s operating budget, but these oil supplies are dwindling. As a result, Alaska needs the federal government to allow new oil and gas leasing off their shores, as well as in the Arctic National Wildlife Refuge, which President Obama has placed off-limits to development. 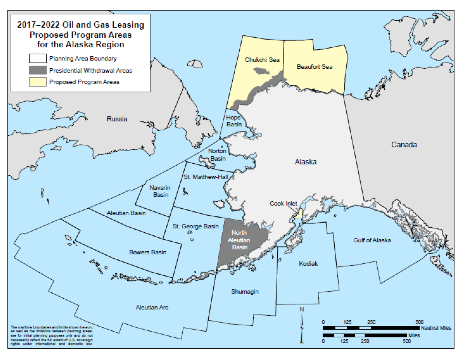 Europeans are not following the premise of keeping their oil resources in the ground, because these resources mean jobs, energy security, and economic prosperity. The Obama Administration, on the other hand, is doing all it can to prohibit drilling on federal lands, dropping the Atlantic seaboard from its 5-year offshore plan and making overtones that may jeopardize lease sales in the Arctic that Alaska desperately needs.