China is building coal-fired plants (about one every 2 days)[i] and nuclear plants to supply its energy needs, but has decided not to waste its time on wind power, according to China’s National Energy Administration (NEA). The local authorities in Inner Mongolia, Jilin, Heilongjiang, Gansu, Ningxia and Xinjiang—the windiest areas in China—were told to no longer approve conventional wind power projects until there is better infrastructure to transmit and use the power. These regions have more wind turbines than the rest of China combined–about 71 gigawatts.[ii] According to the NEA, 33.9 billion kilowatt-hours of wind power (15 percent of China’s total wind power) was wasted in 2015 because of low utilization efficiency.[iii] This is not a new issue. China ordered its wind operators to stop increasing its wind power four times in the last five years because wind’s unreliability was damaging the country’s power grid and costing the government enormous amounts of money. China is learning from its experience with wind power.

Instead of the United States learning from China’s actions, President Obama’s Environmental Protection Agency (EPA) is promulgating onerous regulations that will push the United States into even more intermittent renewable power (wind and solar), making Americans pay higher costs for its energy. After all, he announced that “under my plan, electricity prices will necessarily skyrocket.” Since President Obama took office, residential electricity prices have increased 13 percent, and higher prices will come as EPA’s regulations are implemented.

China’s electric generating base is mostly coal-fired, with 820 gigawatts of coal capacity—almost 3 times the coal-fired capacity of the United States. In the first nine months of 2015, China issued environmental approvals to build 155 coal-fired power plants (123 gigawatts).[iv] China’s second largest generating technology is hydropower, representing almost 23 percent of its capacity in 2014. Wind power had a 6.8 percent share and solar power a 2.3 percent share. (See chart below.) 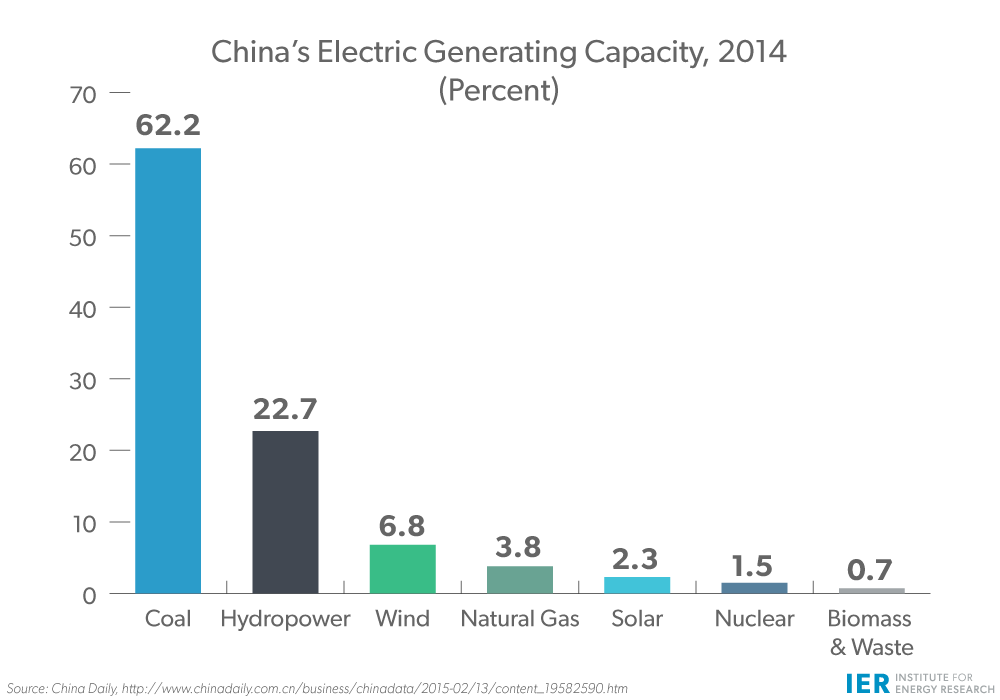 Despite wind representing 6.8 percent of China’s generating capacity in 2014, it only represented 2.8 percent of its generation. The problem is that the windiest sites are far from population centers, and costly transmission lines are needed to bring the power to where it is needed.

Similarly, while solar represented 2.3 percent of China’s generating capacity in 2014, it represented only 0.4 percent of its generation. That’s because solar, like wind, is an intermittent technology, meaning it can only generate power when the sun shines.

Most of China’s generation (75.2 percent) came from thermal power (coal and natural gas).[v] (See chart below.) 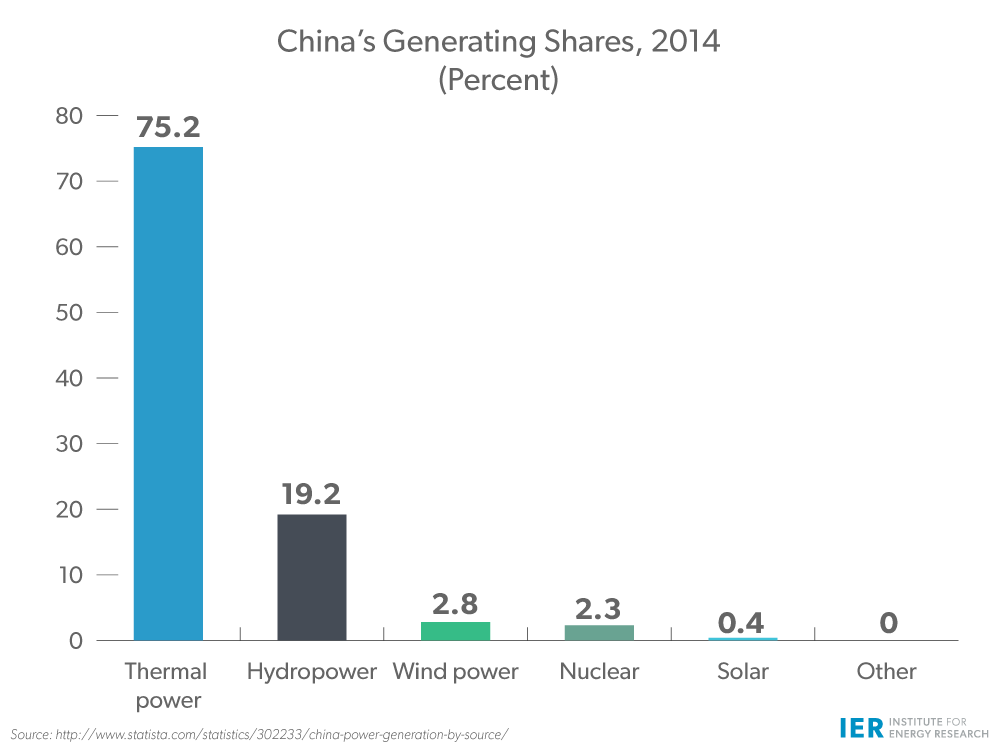 China’s total generating capacity is estimated to have increased 10.4 percent in 2015, despite just a 0.5 percent increase in generation. Nuclear capacity increased 29.9 percent in 2015.[vi] China currently has 32 nuclear reactors operating, 22 under construction, and more about to start construction. It is building some of the world’s most advanced nuclear reactors and expects to have 150 gigawatts of nuclear power by 2030—over 7 times more than it has today.[vii]

The United States retired almost 18 gigawatts of electric generating capacity in 2015, of which over 80 percent was coal-fired. About 30 percent of the coal capacity that retired in 2015 occurred in April when the EPA’s Mercury and Air Toxics Standards (MATS) rule went into effect. More coal-fired retirements are expected due to MATS, as some coal plants applied for and received one-year extensions, extending their lives until April 2016. Several other coal-fired plants have received additional one-year extensions beyond April 2016, because they are needed to ensure electric grid reliability.[viii] 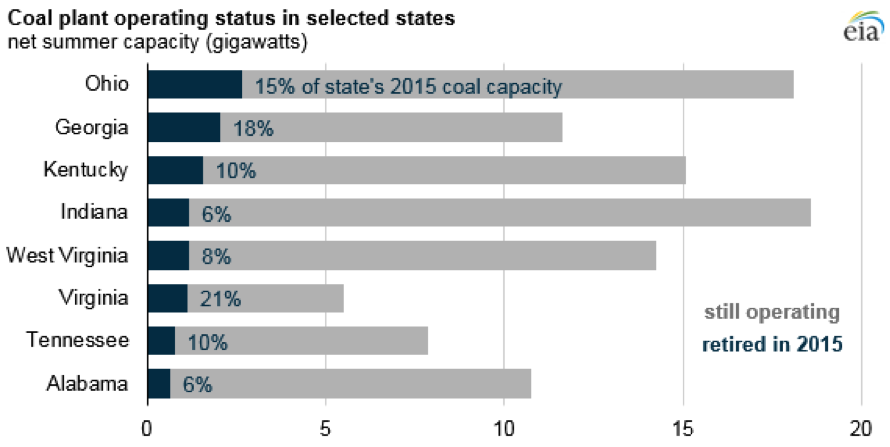 Wind, natural gas, and solar power made up almost all new electric generating capacity in 2015, accounting for 41 percent, 30 percent, and 26 percent of total generating additions, respectively. That trend is likely to continue into 2016 and beyond as Congress allowed subsidies for wind and solar power to continue for another 5 year. EPA’s so-called Clean Power Plan also favors wind and solar power construction, which will result in the retirement of additional coal-fired power plants beyond those retired due to MATS.[ix] 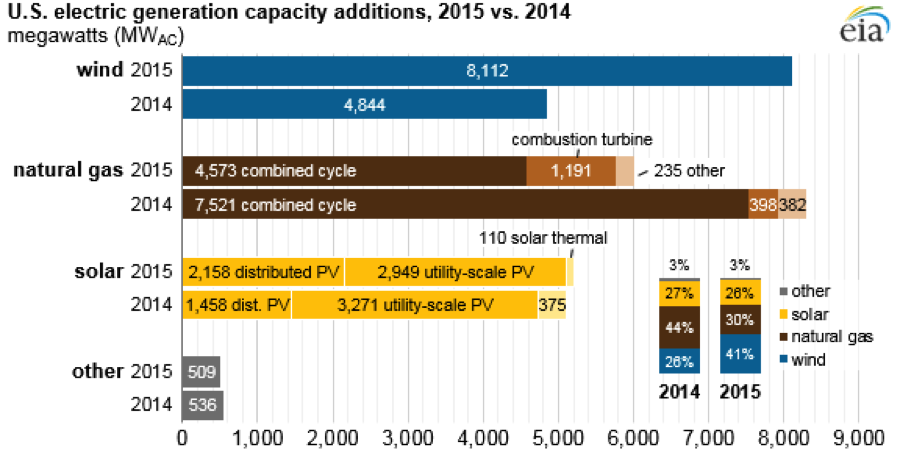 There are 4 nuclear reactors under construction in the United States, which are expected to come on line in 2019 and 2020.[x] In February 2012, the Nuclear Regulatory Commission (NRC) approved a license allowing for the construction and conditional operation of two new nuclear reactors at the Vogtle nuclear power plant in Georgia, marking the first time the commission green-lighted construction for a new reactor since 1978. And in March 2012, the NRC approved a second license allowing construction and conditional operation of two new reactors at the Virgil C. Summer nuclear power plant in South Carolina.[xi] However, onerous regulations in the United States plague the construction of these units, dramatically increasing their cost, in contrast to their construction in China.

China is building electric generating plants for its future with heavy permitting and the construction of coal-fired and nuclear power plants. By contrast, the United States has onerous regulations that are forcing the retirement of coal-fired capacity, as well as the construction of wind, natural gas, and solar plants to take their place. The premature retirement of coal-fired power plants will leave Americans paying much more for their power, as it is more costly to build new capacity than to keep existing capacity operational when reasonable environment regulations are in place.

Obama’s EPA chief admitted that its regulations were meant to show “leadership” rather than actually curb projected warming when confronted in Congress by the fact that the Administration’s plans would have little to no impact on climate change.[xii] In other words, the Administrator of the EPA knows the costs are high and the climate change benefits of the president’s regulations are almost non-existent, but views them as useful for her agency’s public relations campaign. It is unfortunate that the American public will end up paying for these regulations and subsidies in both their taxes and much higher utility bills.

Carbon Restrictions and the Problem of “Leakage”