Last week, ExxonMobil released its annual long-term global forecast and like the International Energy Agency, Exxon Mobil expects North America to become a net oil exporter by 2030. The forecast shows oil being the dominant fuel through 2040 followed by natural gas, which overtakes coal for the number 2 ranking. In ExxonMobil’s forecast, global coal consumption peaks in 2025 and then begins to decline gradually to 2010 levels by 2040. Renewable energy and nuclear power continue to grow.[i]  But, according to ExxonMobil, fossil fuels still make up about 80 percent of the world energy supplies in 2040.

ExxonMobil expects global energy demand to grow by 35 percent due to the world’s population increasing 25 percent from about 7 billion to almost 9 billion people by 2040, led by population growth in Africa and India. Demand growth is largest in the developing countries, increasing 65 percent from 2010 levels.

Transportation sector energy demand is expected to increase by over 40 percent between 2010 and 2040, but mostly from commercial sources (trucks, trains, planes, ships). Expecting light duty vehicles in the transportation sector to become much more fuel efficient, ExxonMobil is forecasting that energy demand for personal vehicles will gradually increase, peak and then begin to decline even though the number of personal vehicles doubles in the forecast, from over 800 million to over 1.6 billion vehicles. 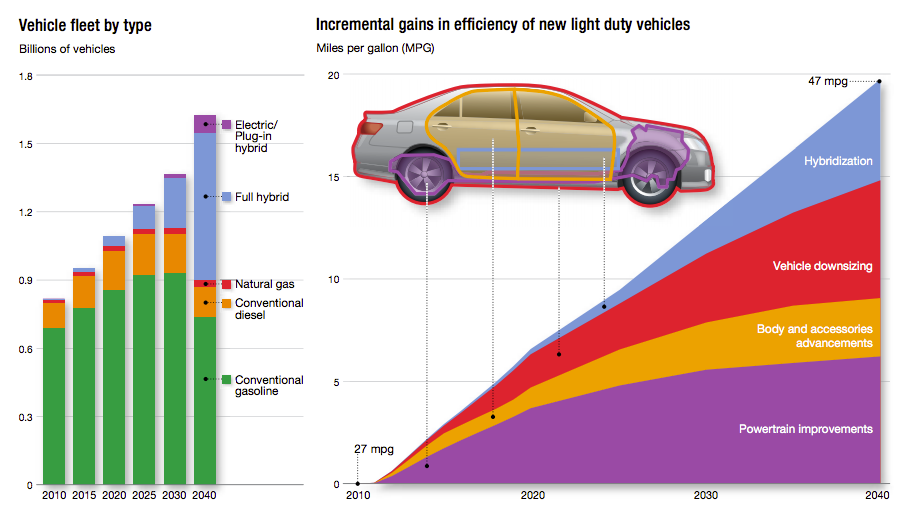 Exxon Mobil expects global electricity demand to grow by 85 percent mainly due to industrial activity, making the electricity sector the largest consumer of increased energy, demanding over 50 percent of the total global increase in energy between 2010 and 2040.

According to ExxonMobil, natural gas and nuclear become the most economic fuels for generating electricity. By 2040, ExxonMobil expects natural gas to account for 30 percent of global electricity generation, up from slightly more than 20 percent today due in part to its emitting 60 percent less carbon dioxide than coal for electricity generation. After 2025, additional renewable and nuclear-generating capacity becomes more significant due to ExxonMobil’s assumption that greenhouse gas policies will be adopted that increase the cost of carbon intensive fuels. Due to an implied carbon tax of $60 per ton of carbon dioxide, coal generation begins to decline in 2030 and nuclear energy doubles by 2040. In the OECD, coal use is forecast to drop 33 percent from 2010 to 2025, substantially more than the previous forecast where it was expected to drop by 23 percent.[ii]

Both wind and solar power grow in the forecast. By 2040, wind energy grows by a factor of 7 and solar energy grows by a factor of over 20, but they make up only 7 percent and 2 percent, respectively, of global electricity supply. Natural gas is the preferred technology to back up intermittent technologies like wind and solar power because natural gas technologies are quick to start up and adjust to changes in demand, are less costly and quicker to build than other technologies, and have a smaller environmental footprint. 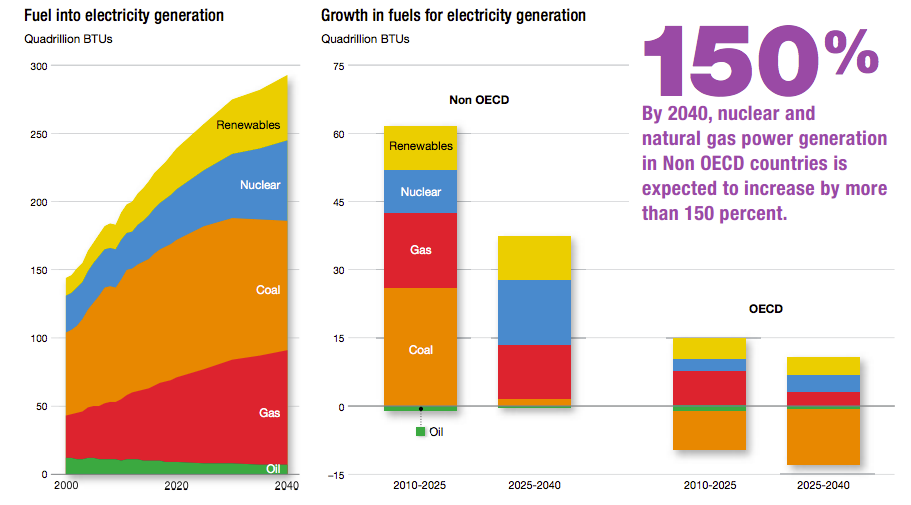 Exxon Mobil expects liquids demand to increase to 113 million barrels per day in 2040, 30 percent more than liquids demand in 2010. Only about 55 percent of that demand will be supplied from conventional crude oil production with the rest coming from deepwater wells, tight oil formations, natural gas liquids, oil sands and biofuels.

In North America, 75 percent of oil production in the 2040 forecast comes from technology-enabled supplies such as tight oil in the Bakken formation of North Dakota, oil sands in Canada, and deepwater developments in the Gulf of Mexico. As a result, North America’s liquid production grows by 40 percent.

Even with the increased production, ExxonMobil cautions that the world contains significant oil resources and that by 2040, less than half of the world’s crude and condensate will have been produced. Further, the resource base will continue to grow as the oil and gas industry finds and develops new types of resources with improved technology. 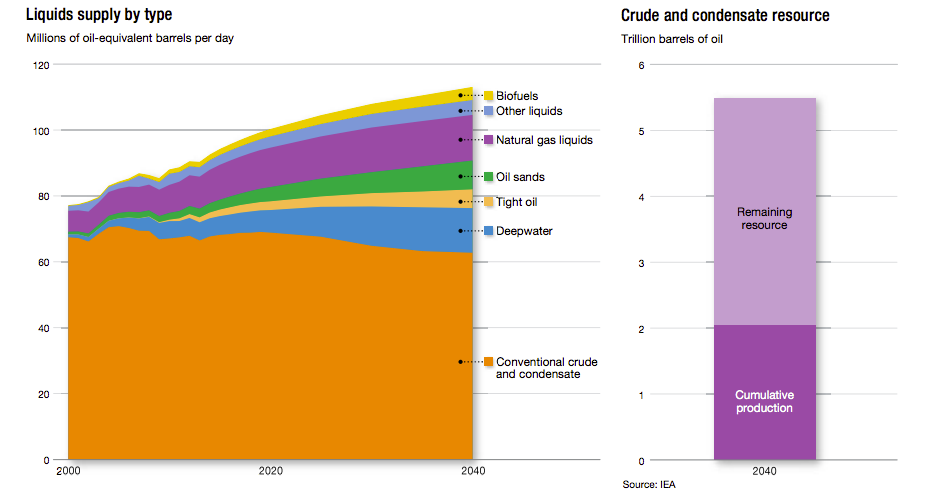 ExxonMobil expects the global demand for natural gas to grow by 65 percent by 2040, faster than the growth in any other major fuel. About 60 percent of the growth is expected to come from unconventional sources of natural gas (shale gas, tight gas, and coal bed methane). But, according to ExxonMobil, unconventional sources will make up only about one-third of the total gas supply in 2040.

The International Energy Agency estimates that about 28,000 trillion cubic feet of natural gas resources remain throughout the world, of which about 40 percent is made up of unconventional sources. In North America, the unconventional gas share of the resource base is higher at about two-thirds. The global resource base is expected to meet current natural gas demand for more than 200 years. 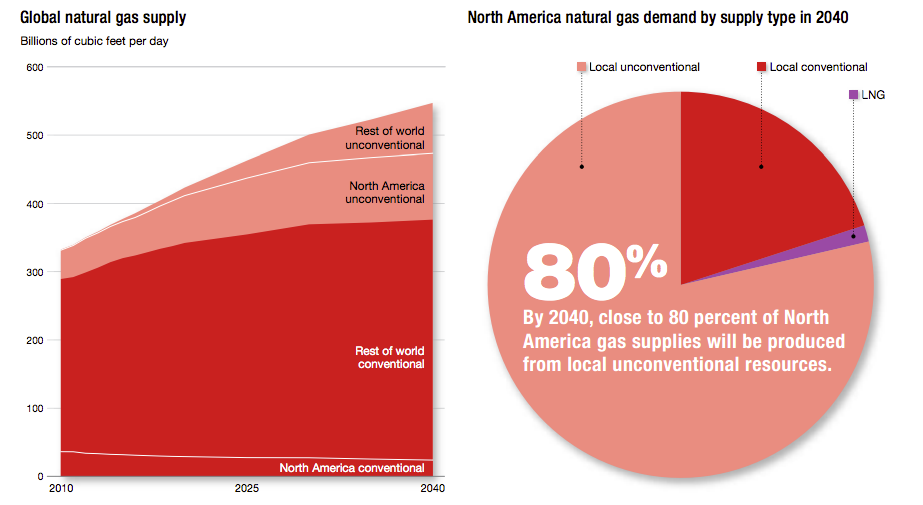 ExxonMobil’s forecast shows a changing energy picture with natural gas use surpassing coal in a little more than a decade and future vehicle sales gaining in hybrid and other alternate vehicle technology. Yet, the company’s forecast shows that fossil fuels will remain dominant globally supplying about 80 percent of the world’s energy in 2040. Technological advancements in liquids and gas production technologies will continue to enable their resource bases to be developed providing both conventional and unconventional supplies. But, that development is contingent on private and government owners providing access to the resources. Competitive fuels such as shale gas and oil have helped U.S. manufacturing industries and the economy to prosper.

According to Kenneth P. Cohen, ExxonMobil’s vice president for public and government affairs, ExxonMobil’s challenge is producing the world’s fuels with the lowest possible footprint. He said, “Going forward, it’s all about technology. Human creativity and innovation always will be the biggest drivers of energy progress.”[iii]  At IER, we believe that these fuels should be as affordable, abundant and reliable as possible for consumers in order to foster economic growth.