This week, the Senate Committee on Energy and Natural Resources released the responses of Sally Jewell, President Obama’s nominee to succeed Interior Secretary Ken Salazar, tomore than 200 questions submitted by members of the United States Senate. The Institute for Energy Research has closely monitored developments in the Jewell nomination, and a review of Ms. Jewell’s responses raises more questions about her record and qualifications.

On page 76, Ms. Jewell responds to a question from Sen. Lisa Murkowski (R-Alaska) about an issue involving the Trans-Alaska Pipeline, an 800-mile pipeline that carries oil from Prudhoe Bay to Valdez and was completed on July 22, 1977, the year before Sally Jewell graduated college. At the time of its construction, thousands of workers from across the United States traveled to Alaska to work on the project, stimulating the state’s economy and securing a stable supply of domestic oil to the nation. In her written response to Sen. Murkowski, Ms. Jewell claims to have “worked on [the pipeline’s] development . . . in the mid-1970s.” See a copy of the document below: 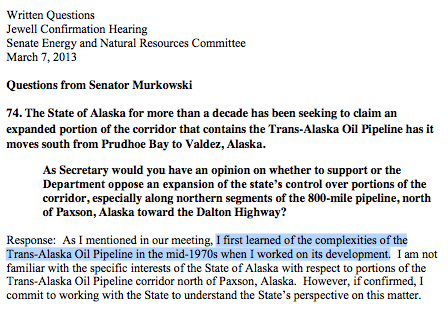 According to a sworn affidavit supplied to the United States Senate, Ms. Jewell began her professional career as a field production engineer in Countyline, OK, for the Mobil Oil Corporation in 1978. She later worked in Denver from 1979-81, before taking a job with Rainer Bank in 1981. No portion of the Trans-Alaskan pipeline intersects the State of Oklahoma or the State of Washington. See below:

According to Ms. Jewell’s statement at her confirmation hearing, she worked “in a field office in Oklahoma,” where she “learned the industry from its source, working alongside . . . teammates, drilling and fracking new wells, and squeezing the last barrel of production out of some of our nation’s oldest oil fields.”

In light of these documents, IER believes the American people should know the extent of Ms. Jewell’s work on the Trans-Alaska pipeline, which was built before she graduated college. Did Ms. Jewell participate in other college projects that give her some special claim to have “worked” on the “development” of major energy infrastructure that predates the beginning of her career?