According to the Energy Information Administration (EIA), annual financial reports by 119 publicly traded exploration and production companies show that their proved reserves totaled 293 billion barrels of oil equivalent at the end of 2021, 6 percent higher than the end of 2020. After net purchases and production, the companies added 19.2 billion barrels of oil equivalent to proved reserves. Excluding revisions, the companies replaced 77 percent of their production through proved reserve additions. EIA estimates that the 119 companies accounted for about 60 percent of total non-OPEC liquid fuels production in 2021.

The 119 companies in this analysis collectively spent $244 billion on exploration and development (E&D) in 2021—–28 percent less than the pre-pandemic five-year (2015–19) average. Additions to proved crude oil and natural gas reserves resulting from improved recovery and from extensions and discoveries are linked to exploration and development expenditures. Proved reserves acquired through purchases and sales represent transfers of assets between companies, including companies outside of the analysis. Revisions to proved reserves, which are affected by changes in crude oil and natural gas prices, may increase or decrease proved reserves.

EIA based its analysis on the published financial reports that 119 domestic and international companies provided to the U.S. Securities and Exchange Commission and that Evaluate Energy collected. Although many of these companies have global operations, some are national oil companies with reserves and operations concentrated in their home countries, such as Russia, China, and Brazil. Company assessments of their proved reserves of crude oil and natural gas change from year to year because of revisions to existing reserves resulting from price changes, extensions and discoveries of new resources, purchases and sales of proved reserves, and production.

Proved reserves are estimated volumes of hydrocarbon resources that an analysis of geologic and engineering data demonstrates with reasonable certainty are recoverable under existing economic and operating conditions. Proved reserves do not represent total oil and natural gas resources, which are much larger. Besides proved reserves, there are in-place resources and technically recoverable resources. 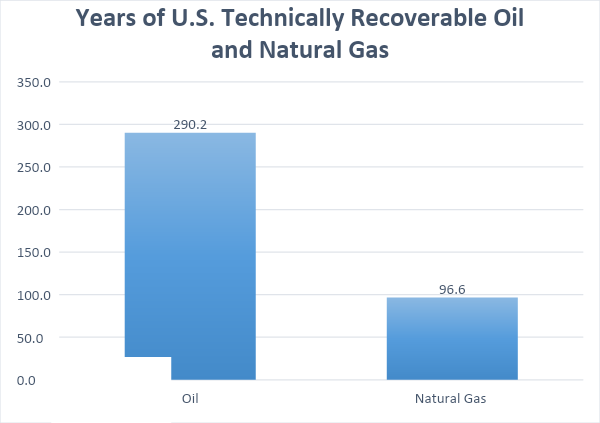 Proved reserves are continually replenished as oil companies are allowed to develop new fields and basins. The chart below shows U.S. proved oil reserves in 1944, total U.S. oil production from 1944 through 2019, and proved reserves as of January 1, 2020.  The 2020 proved reserve number is more than twice the proved reserve number in 1944, while oil companies produced 203 billion barrels between 1944 and 2019, over 10 times as much. This clearly points out that the United States is not running out of oil, and indeed, much of the federal government’s 2.46 billion acres of mineral estate remains unexplored owing to government policies. 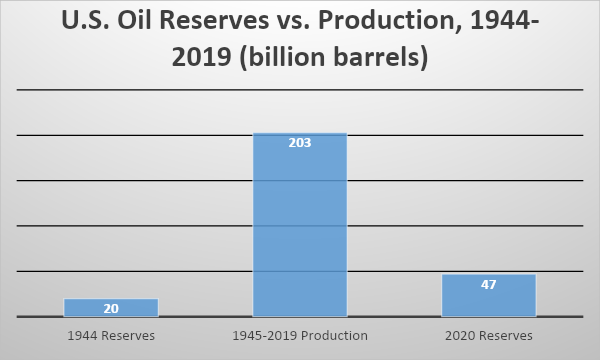 As long as oil and gas companies are allowed access to lands, including publicly owned lands, research and development can continue to increase both technically recoverable resources and proved reserves. The Biden administration, however, is restricting oil and gas companies from having access by refusing to hold lease sales and placing obstacles in the path of development through regulatory actions and red tape. He is also restricting U.S. access to Canadian oil—a heavy oil that U.S. refineries need—by canceling the Presidential permit for the Keystone XL pipeline. It appears that President Biden is okay with obtaining oil from Saudi Arabia, Venezuela and even Iran, but not from our neighbor next door.

The EIA analysis shows that global oil and gas companies are adding to proved reserves despite spending less on exploration and development. An assessment of U.S. oil and gas technically recoverable resources shows that the United States has 290 years of oil and 96 years of natural gas at 2021 usage levels. And, comparing proved oil reserves in 1944 to 2020 shows that oil companies are continually producing more oil and adding to proved reserves. The problem is not with oil companies wanting to produce and sell oil but the regulations and access restrictions that they must face under the Biden administration.

The Plugged In Podcast #88: Alex Trembath on Ecomodernism

Biden is Band-Aiding Again: This Time With a Gasoline Tax Holiday