Less than a decade ago, natural gas prices in the United States were among the highest in the world. However, in the last five years, domestic natural gas reserves have grown 30 percent due to technological advances in the use of hydraulic fracturing,[1] a drilling method that is coupled with directional drilling to access underground reservoirs of oil and gas. This technological breakthrough had an immediate impact on natural gas prices, causing them to plummet and remain low to the present time.

What is hydraulic fracturing?

During the initial phase of the fracturing operation, a well is drilled vertically underground to a point past the deepest aquifer containing fresh groundwater. At this stage, the operator inserts steel surface casing down the length of the drilled hole, then pumps in cement to create a barrier of cement and steel between the groundwater and the well bore. The well is then drilled further down into the underground shale formation, where the operator detonates charges in order to create spaces in rock pores to release oil and gas. To create additional fissures, fracturing fluids are injected into the formation at high pressure, which contain additives such as sand to keep the fissures open and the hydrocarbons flowing.

Additionally, horizontal drilling provides more exposure within a formation than a vertical well—six to eight horizontal wells drilled from only one well pad can produce the same volume as sixteen vertical wells. This use of multi-well pads significantly reduces the overall infrastructure needed for an operation, such as access roads, pipelines routes, and production facilities, thereby minimizing disturbances to the habitat and impacts to the public.  The figure below demonstrates how horizontal drilling is employed: 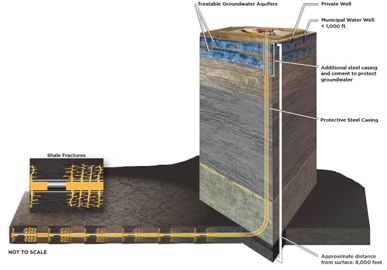 Is it safe for groundwater resources?

Two studies conducted by the Environmental Protection Agency (EPA) and the Ground Water Protection Council (GWPC)—the national association of state ground water and underground injection agencies whose mission is to promote the protection and conservation of ground water—found that there have been no confirmed incidents of groundwater contamination from hydraulic fracturing.[3] This is particularly noteworthy in consideration of the fact that approximately one million wells have been hydraulically fractured in the United States.[4] Furthermore, according to the Interstate Oil and Gas Compact Commission (IOGCC)—the multi-state governmental agency representing states’ oil and gas interests—each IOGCC member state has confirmed that there has not been a case of groundwater contamination where hydraulic fracturing was attributed to be the cause.[5]

Despite this, much ado has been made regarding the use of hydraulic fracturing fluids and their potential to contaminate groundwater. Fracturing fluids consist predominately of water and sand—98 percent or more in a typical fracturing solution—while the rest is made up of high-viscosity chemical additives designed to maximize the effectiveness of the fracture job.[6] Many of the additives consist of common household compounds, and while you certainly wouldn’t want to go out of your way to drink them, the EPA concluded in a 2004 study that the additives are not considered harmful to human life or the environment in the capacity they are used.[7] Additionally, the formula for each fracturing fluid used in a drilling operation must, by mandate of the Occupational Safety and Health Administration, be disclosed at each drilling site, and a coalition of state groundwater and oil and gas regulators recently launched the Frac Focus Chemical Disclosure Registry to allow companies to voluntarily disclose the content of fracturing fluids used at individual well sites. Within 10 days of the site’s launch, 32 companies disclosed chemicals used at 388 wells.[8] For a table of common additives, please see: http://www.energyindepth.org/frac-fluid.pdf.

Furthermore, stringent state and federal regulations on well design and construction ensure that fracturing fluid additives do not migrate upward into active or treatable water reservoirs. As aforementioned, groundwater is protected during the process of hydraulic fracturing by steel and cement casing that is installed when the well is first drilled to isolate groundwater resources. Operators have a further interest in ensuring that fractures are sufficiently well removed from underground water resources, as the penetration of a water table above a formation could render the oil and gas resources unusable.

After a fracturing job has been completed, the majority of fracturing fluids are recovered from the well and recycled in a closed system for future use. Surface disposals of fracturing fluid are subject to the federal Clean Water Act, requiring treatment for any potentially harmful substances prior to discharge, or the federal Safe Drinking Water Act if disposed in an oil and gas injection well.[9]

How much shale gas do we have?

The U.S. has an abundant amount of natural gas. The Energy Information Administration estimates that the U.S. has in excess of 2,119 trillion cubic feet (Tcf) of technically recoverable natural gas,[10] enough to power the U.S. for 88 years at current rates of consumption. Unconventional resources, like shale gas, account for 60 percent of the onshore recoverable resources,[11] representing an enormous advancement in the United States’ future energy outlook. In fact, half of the gas consumed today was produced from wells drilled within the last 3.5 years.

Most of the natural gas consumed in the United States is produced domestically—approximately 89 percent in 2010[12]—and much of this supply comes from Texas, Wyoming, and Oklahoma.[13] However, shale gas is present in many of the lower 48 states, in shale plays or basins.  The map below shows the approximate geographic locations of major producing or prospective gas shales:

The economic impact of this vast resource cannot be understated. In 2008, after breakthroughs in hydraulic fracturing yielded access to unconventional gas deposits, the wellhead price of natural gas plummeted from nearly $8 per thousand cubic feet to $3.67 per thousand cubic feet.[14] In 2009, the United States was the world’s largest natural gas producer,[15] and of the 24.1 Tcf of natural gas that Americans consumed in 2010, just 2.6 Tcf, or 11 percent, was provided from net imports.[16]

In addition to keeping prices low for American consumers—who get 24 percent of their electricity from natural gas[17]—increased domestic production also creates jobs and generates royalties for residents, cities, and school districts. For example, a recent study estimates that in 2009, the development of the Marcellus Shale created 44,000 new jobs in Pennsylvania, and added $389 million in state and local revenue, over $1 billion in federal tax revenue, and almost $4 billion in value added to the state’s economy.[18]

Resources,” the GWPC found that all oil and gas producing states currently have regulations in place to provide protection for water resources during oil and gas exploration and production.[19] Enacting national regulations for these activities would not only be duplicative and costly for states to implement, it would indicate a fundamental disregard for states’ expertise in managing their own natural resources. Common sense dictates that states, with field operations, are in a better position to evaluate the hazards of a drilling operation than federal agencies whose operations are removed from the circumstance.

This is not to say that no federal regulations apply to hydraulic fracturing. Operations are subject to a number of federal statutes, including the Clean Water Act, Safe Drinking Water Act, the National Environmental Policy Act, and the Emergency Planning and Community Right-to-Know Act.[20]

Recent attempts to portray hydraulic fracturing as a dangerous, unregulated practice are misleading at best. When done within the set parameters of the numerous state and federal regulations that govern safe drilling practices, hydraulic fracturing has the potential to provide the United States with an abundant supply of clean-burning natural gas for years to come. Rather than trying to reinvent the wheel with new federal mandates, regulators should defer to states who can tailor and apply regulations to suit their specific circumstances.

Policy decisions on hydraulic fracturing will have significant ramifications for our future energy security. According to the National Petroleum Council, up to 80 percent of natural gas wells drilled in the next decade will require hydraulic fracturing;[21] one can only imagine the bureaucratic nightmare that would ensue upon granting the federal government with even more oversight of each operation. Indeed, the notion that the federal government would need to regulate on a well-to-well basis seems all the more incredible when juxtaposed with the industry’s excellent safety record. As aforementioned, there has not been a single confirmed incident of groundwater contamination arising from hydraulic fracturing since the practice began in 1947.

Instead of bringing an already well-regulated practice under the yoke of the EPA, the federal government should refocus its efforts upon maintaining access to affordable, domestically produced energy. In a time of rising gasoline and food prices, American families cannot shoulder a hit on another essential commodity—nor should they be expected to.

Solar Equipment Manufacturer in Trouble Due to Low Demand

We Have To Do Something About These Soaring Gold Prices