Using historical price and production data for the years 2008 to 2013, a new study has found that hydraulic fracturing and horizontal drilling applied to shale oil formations saved consumers between $63 and $248 billion in 2013 (and a cumulative savings between $165 and $624 billion.) Without these technologies, international crude oil prices would have averaged $122 to $150 per barrel– $12 to $40 a barrel more or between $0.29 and $0.94 per gallon more on gasoline and other refined products.[i]   President Obama’s insistence that “we can’t just drill our way to lower gas prices” has been proven dead wrong.

The U.S. energy renaissance has been driven by innovations in horizontal drilling and hydraulic fracturing. About 48 percent of U.S. oil, condensate and natural gas liquids production in 2013 came from shale formations produced using these technologies—up from 11 percent of U.S. production in 2008. Total production of these fuels from shale oil formations in 2013 was 4.78 million barrels per day. Nearly every barrel of new U.S. oil production is attributable to the use of horizontal drilling and hydraulic fracturing technologies.[ii]

ICF International evaluated the impact on oil supplies and oil prices of hydraulic fracturing technologies by comparing actual historical data to counterfactual data, i.e. data where hydraulically fractured wells were removed.[iii] Three different representations of analysis were used to determine the impact hydraulic fracturing had on oil markets between 2008 and 2013 based on 1) a long-run model of supply-demand equilibration, 2) a short-run model that regresses Brent spot oil prices, and 3) a short-run model that estimates the impact of oil prices on global oil supply and demand. 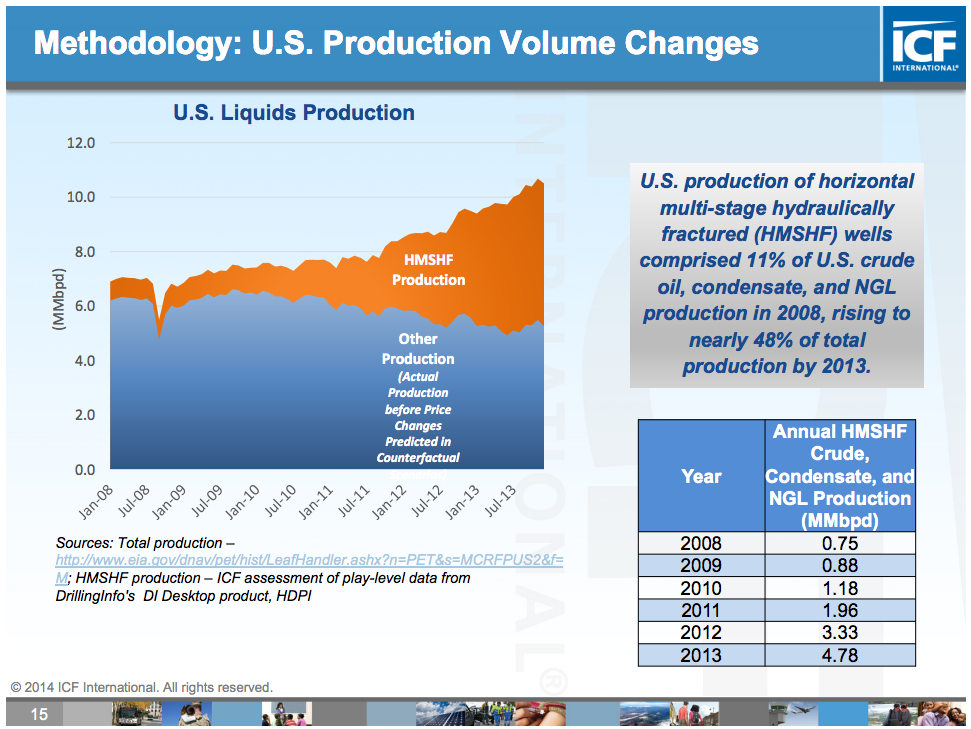 The following ICF chart shows the changes in production, Brent crude oil prices, and U.S. petroleum product prices based on not deploying hydraulic fracturing to obtain oil from shale formations in the United States for each year between 2008 and 2013. According to the study, Brent oil prices would have been almost $40 a barrel higher and petroleum product prices would have been almost $1.00 a gallon higher in 2013 if oil was not produced from shale formations using hydraulic fracturing. 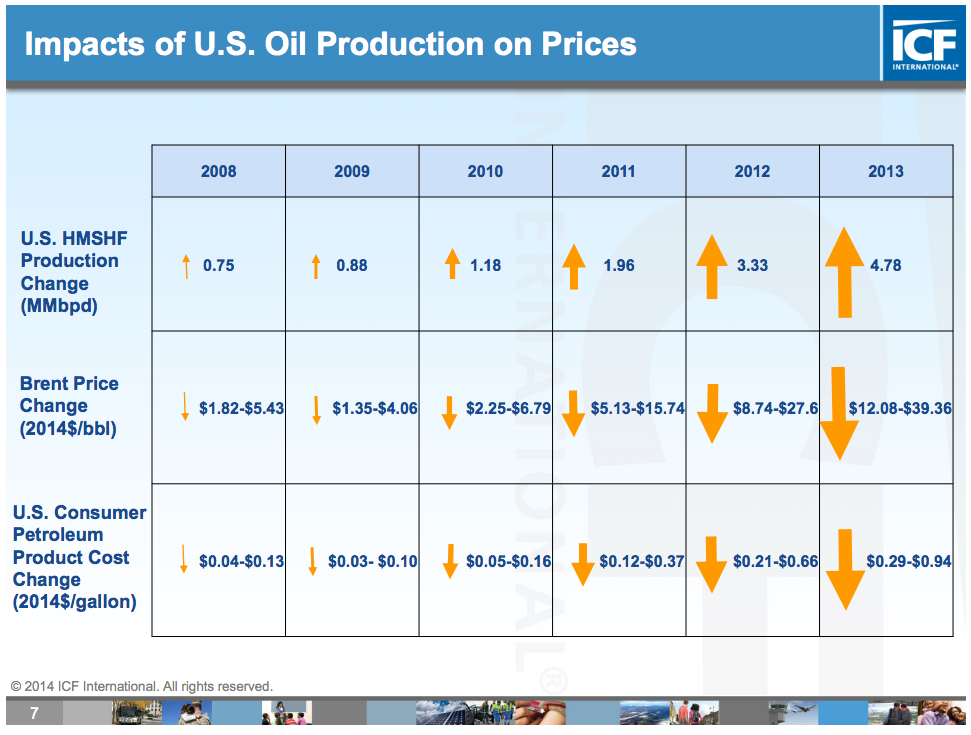 Study on Benefits of Unconventional Oil and Gas Development

While ICF limited its analyses to crude oil production and liquid petroleum products such as gasoline, a study last year by IHS Global Insight estimated that the average U.S. household saved about $1,200 in 2012 from unconventional production of both oil and natural gas, and projected that the savings would increase to $3,500 by 2025. According to the study, the full unconventional value chain supported 2.1 million jobs in 2012, and is projected to support 3.9 million jobs by 2025, including 515,000 manufacturing jobs.  By steadily increasing U.S. competitiveness, IHS found that unconventional oil and gas production would contribute $180 billion to the U.S. trade balance by 2022. In addition, IHS found that unconventional energy[iv]:

IHS Global Insight used its macroeconomic model for the analysis. Like ICF, IHS also created a counterfactual case where unconventional oil and gas production and investment was removed and a higher trajectory of natural gas prices was assumed because without shale gas development, the United States would be importing liquefied natural gas (LNG) at higher cost. The underlying gas price used is equivalent to the European LNG price that ranges from $11 to about $14 per thousand cubic feet in the forecast period. The counterfactual case was then compared to a base case and a low production case. The purpose of the low production case was to estimate the impact if future unconventional oil and natural gas production is reduced by a more restrictive policy and regulatory framework than assumed in the base case.[v]

Unconventional oil and natural gas activity is reshaping America’s energy future and bringing significant benefits to the U.S. economy in terms of jobs, government revenues, and GDP. Despite President Obama’s insistence that it could not be done, surging domestic oil production from shale formations using hydraulic fracturing technology is driving the United States toward energy independence and creating large financial benefits for consumers. The U.S. energy revolution was not an accident, but rather the result of decades of American innovation and entrepreneurship aimed at unlocking the country’s domestic resources coupled with prudent regulations by the states which allowed for shale oil and shale gas production. To unlock the country’s full potential, politicians must continue the energy renaissance by allowing access to the nation’s resources and by not imposing duplicative regulations on shale development that would needlessly raise production costs.