There have been many ups and downs in the oil market over the last decade causing oil prices to either escalate or drop precipitously. Of particular note is the oil price drop in 2008 from a price of $146 per barrel to $35 per barrel in just 6 months[i]—a price decline of over 75 percent. The current price decline—one that caught forecasters by surprise– is much less—closer to 25 percent—but has ramifications throughout the oil producing and consuming world. 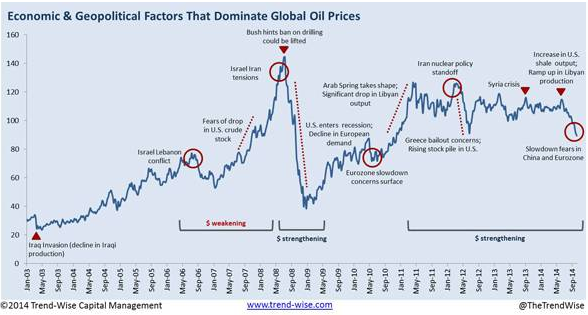 Reasons for the Current Price Decline

Over the past three years, high oil prices have generated interest in oil production in areas previously thought too expensive to explore such as the Arctic and East Africa. With that, technological breakthroughs in oil and gas extraction and infrastructure have made the development of unconventional oil resources possible in areas that were thought to be too high-cost, too high-risk or too far away from established markets.[ii]

More specifically, global oil production has been on the rise, particularly in North America. Due to the shale oil renaissance in the United States from hydraulic fracturing and directional drilling technology that is taking place predominantly on private and state lands, oil production has increased by 71 percent from average 2008 volumes to the latest production data collected by the Energy Information Administration (EIA) for July 2014. Likewise in Canada, oil production, driven largely by oil sands, has increased by 26 percent from average 2008 production volumes to the latest production data reported by EIA for June 2014. Further, Russia has been setting records for oil production, producing 10.5 million barrels per day on average for 2013, 7.5 percent higher than its average production for 2008. Further, Libya, Nigeria, and Iraq have unexpectedly resumed their oil production.

In Libya, fighting and protests had curtailed production; the country is now working to sustain its production, which is averaging 900,000 barrels of oil per day for October—15 percent higher than in September.[iii] In Nigeria, oil production is often disrupted by unrest in the Niger River Delta, the country’s main oil-producing region. In August, however, Nigerian oil production reached 2.3 million barrels a day–the most since January 2006. Its production gain in August of 380,000 barrels per day was the biggest one-month gain since 1989.[iv] Iraq’s oil production hit its highest level in 35 years in February at 3.6 million barrels per day, but has since fluctuated because of logistical constraints and political turmoil.[v] In July, its oil production dropped to 3.1 million barrels a day, but even this level is above what it had been producing for decades, according to EIA data.[vi]

Added to the increasing oil supply is a shrinking market for oil demand. Last month, the International Energy Agency cut its global oil demand growth for 2014 and 2015 by 0.9 million barrels per day and 1.2 million barrels per day, respectively, because of a slowdown in demand growth in the second quarter of 2014 and a weaker outlook for Europe and China.[vii] Oil demand has stagnated or risen less than expected across Europe, Japan, China and much of the emerging world. A number of factors (e.g. slow economic growth, increased energy efficiency) have influenced oil demand in these countries.

According to the EIA, Europe’s oil demand has been declining since 2006. Europe’s oil consumption levels are at their lowest since the early 1990s. Between 2008 and 2013, oil consumption in Europe dropped by 11 percent due to a bleak economic outlook, increasing energy efficiency and a switch to alternative forms of energy.[viii] Further, the International Monetary Fund just downgraded Europe’s growth to less than 1 percent.[ix]

In Japan, the combination of a declining, ageing population and improved efficiency have cut Japan’s oil consumption by 15 percent between 2005 and 2013. Imports of crude by the world’s third largest oil consumer are falling with OPEC taking most of the supply reduction. By March 2014, Japan’s total refining capacity will have dropped to its lowest level since 1970– just below 4 million barrels per day, a decline of about 1 million barrels per day (20 percent) from 2010.[x] Further, Japan has decided to restart some of its nuclear reactors, which is expected to reduce demand for fuel oil in the power sector even more in the future.[xi]

China’s gross domestic product growth in the third quarter of this year dropped to 7.3 percent, its weakest rate in five years. China’s growth in oil demand has also been declining, increasing only 1.8 percent in the first nine months of this year, down from demand growth of 6.7 percent in 2011, 3.4 percent in 2012, and 2.5 percent in 2013.[xii] Despite China’s economy and oil demand growth being down, the country is taking advantage of the oil price drop by building its commercial inventories and filing its strategic petroleum reserve with less expensive oil imports.

In August, Saudi Arabia tried and failed to stop the slide in oil prices by cutting its oil production by 400 thousand barrels per day. Unsuccessful, Saudi Arabia has now decided to maintain its market share, accepting a near-term loss in revenue over the next two years due to a world oil price below the breakeven price needed for balancing its national budget. By accepting the lower oil price and seeking to maintain market share, the Saudis hope to slow or halt unconventional oil production in the United States and Canada, to hurt its adversaries (Iran and Iraq) and to hinder Russia’s ability to fund the Assad regime in Syria.

As IER explained in this article, Saudi Arabia is not likely to contain U.S. shale oil production by letting oil prices drop to $80 a barrel for a year or two. That is because existing shale oil wells that have been drilled but not yet been hydraulically fracked will keep producing oil for months, drillers that have long-term rig contracts will continue to deploy that equipment rather than pay penalties for dropping their use, the breakeven point for shale oil wells is at much lower prices than $80 a barrel oil, and efficiency improvements are lowering the price point even more. In North Dakota, for example, there were around 630 wells waiting to be hydraulically fracked at the end of July– a backlog of at least three months. According to Baker Hughes, oil rigs in North America hit an all time high of 1,609 earlier this month, an increase of 17 percent from a year ago.[xiii]

Industry experts believe that oil prices would need to fall at least another $20 a barrel to affect the oil boom in the United States. For instance, oil drilling in Texas’s Eagle Ford Shale would remain economic to drill at an oil price of $53 to $65 a barrel and in North Dakota’s Bakken Shale at an oil price of $60 to $75.[xiv] Some North Dakota producers indicated that their cheaper wells are profitable to produce at $25 a barrel and their higher-cost wells are profitable at $45 a barrel because some of their losses would be protected under the federal tax code. At these lower oil prices, these companies may not drill new wells, but they can survive producing from their existing wells. 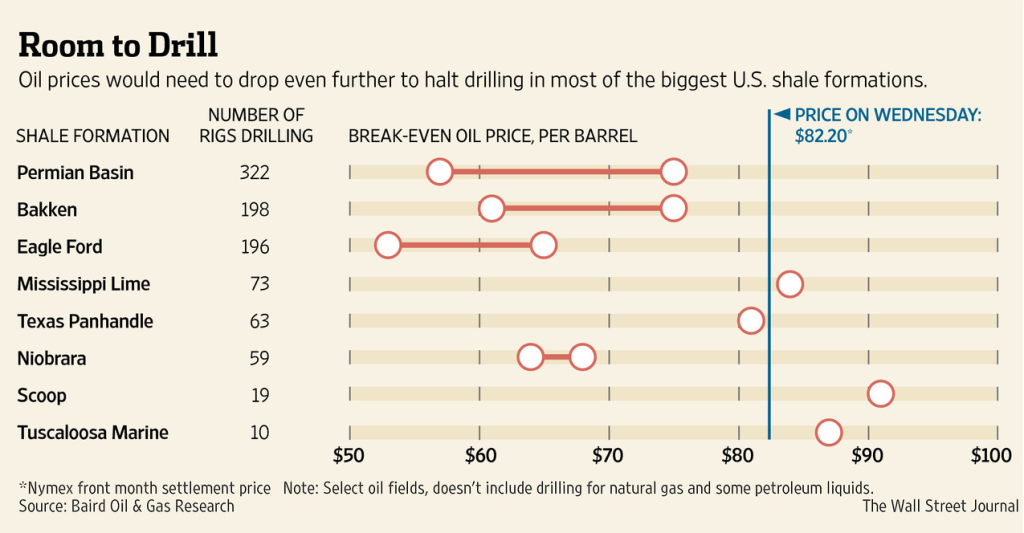 Oil market analysts and forecasters were taken by surprise by the 25 percent drop in oil prices since June. But, stagnant economies, slow growth in oil demand, and increasing oil supplies from unconventional oil in North America, record oil production in Russia, and the resumption of production in oil producing countries plagued by unrest have changed the market dynamics. How long the price decline will last and to what price level it will bottom out at are not clear, though some believe that oil prices could be reduced to levels as low as $65 per barrel.