The International Energy Agency (IEA) just released it World Energy Outlook 2013 and moves up the date by which the United States will become the world’s largest oil producer.  In last year’s Outlook, the agency predicted the United States to be the number one oil producer by 2017, but it now predicts we will achieve that ranking two years earlier, in 2015, and we will then be producing 11 million barrels per day. The shale oil renaissance enabled by hydraulic fracturing coupled with directional drilling technology is the reason that the United States can reclaim that position from the current oil production leaders–Russia and Saudi Arabia. The United States remains the world’s largest oil producer for much of the IEA forecast period to 2035. Improved energy efficiency and a boom in unconventional oil and gas production enable the United States to meet almost all of its energy needs from domestic resources by 2035. Also, IEA points out that in 2035, fossil fuels still remain the major fuels on which the world relies, supplying 76 percent of primary energy demand in 2035.

Over the next decade, increasing oil production in North America and Brazil reduces the need for OPEC oil due to technological advancement. According to the IEA, technology is opening up new types of resources, such as tight oil and ultra-deepwater offshore fields that were considered too difficult and expensive to access until recently. Through this decade, the oil boom in North and South America threatens revenues for OPEC’s members, whose production is at its lowest in two years, but OPEC will resume its major position towards the end of IEA’s forecast period as it remains the only major source of relatively low cost oil. IEA expects oil production in the United States to peak at almost 12 million barrels per day in 2025 and plateau thereafter. Despite new resources opening up, national oil companies and their host governments still control 80 percent of the world’s proven-plus-probable oil reserves. 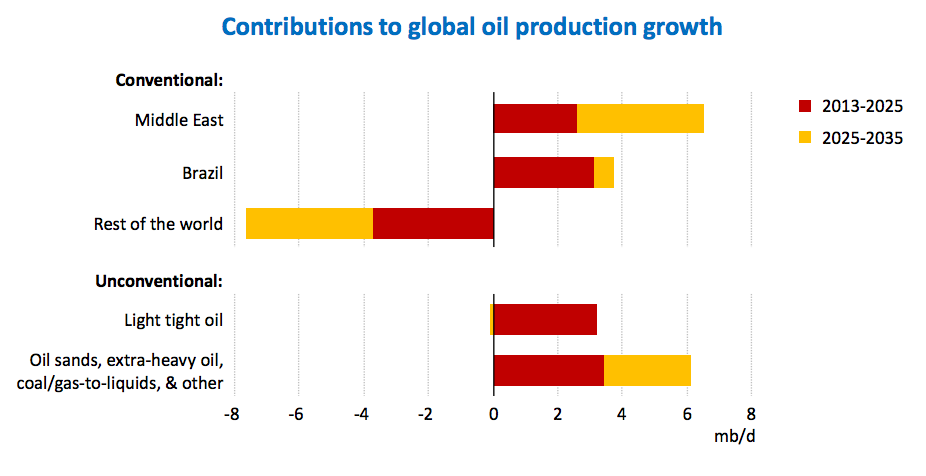 IEA’s estimates for remaining recoverable oil resources are 2,670 billion barrels of conventional oil (including natural gas liquids), 345 billion barrels of tight oil, 1,880 billion barrels of extra-heavy oil and bitumen, and 1,070 billion barrels of kerogen oil. Cumulatively, 790 billion barrels of oil need to be produced to meet projected demand.[ii]Oil prices are expected to increase to $128 a barrel (in 2012 dollars) by 2035 – higher by $3 from IEA’s 2012 Outlook.[iii] IEA believes the higher price will encourage development of unconventional oil resources such as oil sands in Canada, natural gas liquids, and the shale formations that have lifted U.S. production. But, IEA’s report notes that other nations are unlikely to replicate the U.S. shale boom,[iv] even though areas of Argentina, Russia, China, and the Middle East seem promising. According to the IEA, “good geology alone is not sufficient to replicate the U.S. experience,” because outside of the United States, neither the legal environment nor the oil services industry capacity exists to make shale oil and gas development worth the cost. For example, more than 6,000 wells were drilled for unconventional oil in the United States and Canada in 2012, but only 100 outside of North America.[v]

Based on the above oil resources and assumptions, the IEA has determined that the light tight oil (shale oil) renaissance will result in oil production in the United States peaking in 2020 and reaching a plateau thereafter, requiring the world to once again rely heavily on OPEC oil. While these assumptions by IEA may prove true, it is equally likely that IEA’s assessment of the resource base and the ability to tap shale oil resources in other countries is too pessimistic. For example, in 1995, the U.S. Geological Survey estimated that the Bakken shale formation in North Dakota and eastern Montana held 151 million barrels of recoverable oil. But, in 2008, the USGS revised its estimate by a factor of 25, estimating that the Bakken holds 4.3 billion barrels. Oil experts, however, believe that the Bakken contains a lot more recoverable oil–20 billion barrels.[vi] Further, new estimates are popping up for resources in the Monterey shale formation in California; and a new shale field, the Wolfcamp Shale formation in Texas, is touted to contain 50 billion barrels of oil, making it the largest oil field in the United States and the second largest in the world.[vii]  A decade ago, IEA did not include shale oil and gas in its estimates because it was not considered commercial; today, it is the leading source of new hydrocarbon production in the world.

Due to a geographical shift in oil demand and a build-up of refinery capacity in Asia and the Middle East, by 2035, IEA projects that almost 10 million barrels per day of global refinery capacity (about 10 percent) is expected to close, particularly in Europe.[viii] IEA estimates 13 million barrels per day of new refinery capacity will be built by 2035, mostly in China, India and the Middle East, which adds to global over-capacity, increasing competition for available crude oil and for product export markets. China becomes the world’s largest oil consumer by 2030.[ix] 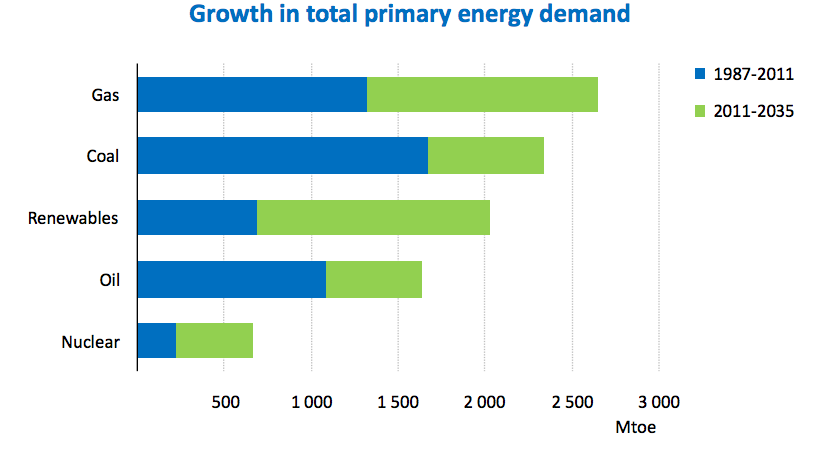 Global energy demand increases by one-third by 2035 with the increase coming from developing countries in Asia, South America and the Middle East. China leads all countries in increasing energy demand during this decade but takes a back seat in the 2020s as India and countries in Southeast Asia take the lead in driving consumption higher. The Middle East becomes the world’s second-largest gas consumer by 2020 and third-largest oil consumer by 2030. Brazil increases its energy consumption by 80 percent by 2035 and becomes a top oil producer globally, tripling its output to 6 million barrels per day in 2035. By 2035, energy demand in OECD countries is less than half that of non-OECD countries. 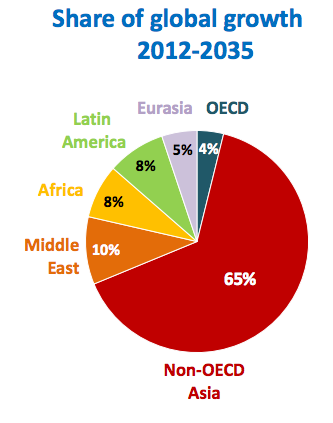 The use of coal is expected to increase by 17 percent between now and 2035, primarily because the fossil fuel remains far cheaper globally than natural gas. Demand expands by one-third in non-OECD countries, predominantly in Asia, despite IEA’s expectation that China will reach a plateau after 2025. China is currently the world’s largest consumer of coal, consuming as much coal annually as the rest of the world combined.[x] India becomes the largest importer of coal by the early 2020s. Globally, coal remains the leading source of electricity generation, though its share falls from 41 percent to 33 percent in 2035. The agency notes that the magnitude of future global coal demand growth, however, is uncertain due to varying stringency of national environmental policies.

Despite a recent slowdown in nuclear energy due to the Fukushima accident in Japan resulting from a massive tidal wave, nuclear energy is expected to increase globally led by China, South Korea, India and Russia.

The report projects that renewable energy will increase its share from 13 percent of energy supplies in 2011 to 18 percent by 2035. IEA notes that the growth could be faster, except that wood, a renewable fuel, is being replaced by conventional fuels such as electricity or natural gas, which increase fossil fuel consumption.[xi] IEA expects that low-carbon energy sources (nuclear and renewables) meet about 40 percent of the growth in global energy demand. Nearly half of the net increase in electricity generation comes from renewable energy. Expansion of non-hydroelectric renewable energy depends on subsidies that are expected to more than double globally to $220 billion by 2035. But, this large growth in renewable energy only reduces the dependence on fossil fuels from 82 percent today to 76 percent in 2035. IEA cautions that, in some regions, rapid expansion of wind and solar PV raises fundamental questions about the design of power markets and their ability to ensure adequate investment and long-term reliability. 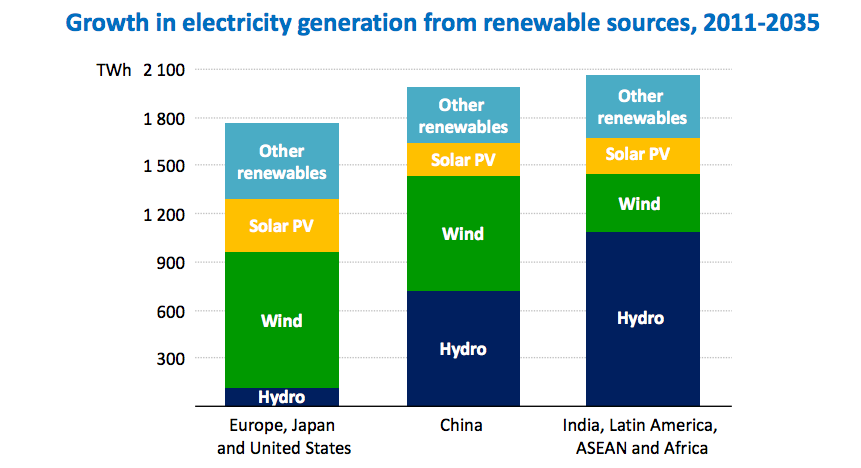 Natural gas and electricity prices are currently higher in other countries than in the United States, but IEA predicts that the difference will narrow, particularly for natural gas as the United States becomes a liquefied natural gas (LNG) exporter and new LNG trade linkages are created, particularly between North America and the Asia-Pacific region.  Natural gas demand increases in the IEA forecast by almost 50 percent by 2035. New sources of natural gas, both conventional and unconventional, result in greater diversity of global supply.

Currently, industrial natural gas prices in China are more than double those in the United States; in the European Union, they are almost 3 times higher; and in Japan more than 4 times higher, placing energy-intensive industries such as iron, steel, petrochemicals, and concrete, in Japan and the European Union at a large competitive disadvantage. The IEA expects that the United States’ share of the global market for energy-intensive goods will grow by one percent, while the European Union’s will drop by 10 percent, and Japan’s by 3 percent. The IEA predicts that industrial natural gas prices globally will be reduced to about twice that of the United States by 2035. (See graph below.) 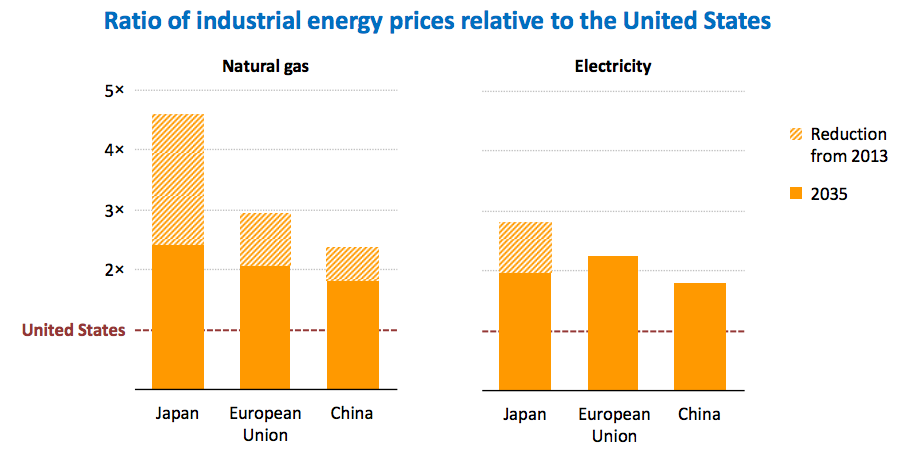 Growth in primary energy demand is expected to continue as countries fuel their economic growth and as developing economies strive to provide energy to more of their people. For example, in 2011, nearly 1.3 billion people worldwide lacked access to electricity and more than 2.6 billion relied on biomass for cooking.

Coal, oil, and natural gas are expected to remain the major suppliers of energy demand, meeting 76 percent of the world’s requirements in 2035, down from 82 percent today. And, due to technological advancement from hydraulic fracturing and directional drilling, the United States is expected to become the world’s largest oil producer in 2015 and hold that rank through much of IEA’s forecast period. And by 2035, the United States meets almost all of its energy needs from domestic resources.