For years, politicians in California have prided themselves as being on the forefront of regulation of carbon dioxide and greenhouse gases. In 2006, California passed the immodestly titled “Global Warming Solutions Act” to reduce California’s carbon dioxide emissions by 25 percent by 2020.[i] California has implemented a state-wide cap-and-trade system for carbon dioxide, they pressed the federal government to dramatically increase fuel economy standards for cars, they are trying to implement a “low carbon fuel standard” for gasoline and diesel, they subsidize renewable generation, and they have increased their renewable electricity mandate to 33 percent by 2020.

To evaluate their progress reducing greenhouse gases, California asked the Lawrence Berkeley National Laboratory (LBNL) to assess whether its existing policies and technologies would enable it to meet its greenhouse gas emissions goal of an 80 percent reduction from 1990 levels by 2050. The answer was: Not even close! Even under the most ambitious policies, which would be highly unrealistic, the state would still fall far short of its greenhouse gas emissions goal in 2050, although it does meet its 2020 goal.

The Lab report found that if all of California’s policies were implemented such as cap-and-trade, low carbon fuel and renewable electricity standards, zero-emissions-vehicle mandate, the state’s greenhouse gas emissions in 2050 would be virtually unchanged from today.[ii] And if more aggressive measures were adopted, greenhouse gas emissions would still exceed the state’s target by a huge amount, which indicates that the many billions that California spends annually on electric car and rooftop solar subsidies, energy efficiency upgrades and alternative fuel development is all for naught.

As an example of a more aggressive policy consider California obtaining 50 percent of its electricity from wind, solar, geothermal and biomass; increasing its fleet of so-called zero-emission vehicles from 50,000 today to 17 million; reaching an auto fuel efficiency of 78 miles per gallon; and increasing rooftop solar generation by 800 percent—all by 2050. Under this aggressive policy, the state would still miss its 2050 target by more than 100 percent.

For California to meet its 2050 goal, the state would have to reduce greenhouse gas emissions by 90 percent from every aspect of its economy. Besides instituting more green policies such as those identified above, the state would need to reduce demand, which is driven by population and economic growth—measures not controlled by current government policies.

LBNL developed three scenarios of differing policies to see if California’s greenhouse gas emissions target for 2050 could be met. Scenario 1, the baseline case, assumes the state’s existing policies are implemented. Scenario 2 adds additional uncommitted policies, such as expanded building retrofits, waste diversion and biofuel usage. Scenario 3 is the most ambitious case and assumes extensions of policies to implement emerging technologies, such as vehicle fuel efficiencies of 77.9 mile per gallon, greater amounts of biofuels, more zero-emission and natural gas vehicles, and a higher renewable portfolio standard where 51 percent of electricity is produced from renewable fuels.[iii]

The model covers the period from 2010 to 2050 and includes all sectors of California’s economy known to emit greenhouse gases, including water, waste, electricity generation, light-duty vehicles, heavy-duty vehicles, fuels and buildings. LBNL used official California projections of growth in population and gross state product, which are the two main drivers for estimating greenhouse gas emissions. Between 2010 and 2060, the state’s population is forecast to gain 15.4 million people, according to projections from the California Department of Finance.[iv] 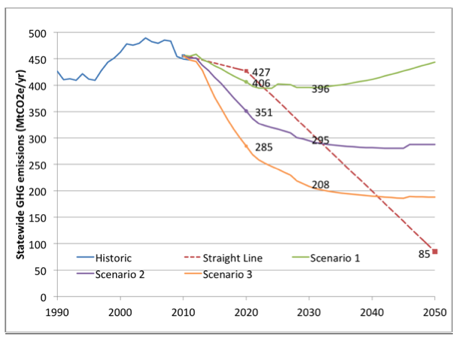 Some policies such as the Governor’s $100 billion bullet train would increase emissions during its first few decades of operation. According to the Wall Street Journal, that policy shows “that modern environmental policies are less about solving problems than they are about indulging faith-based dreams”.  The state could try other measures such as controlling population growth or lowering its economic growth—neither of which are measures that a free society should want to use—let’s hope.

IEA Predicts the U.S. Will Be the World’s Largest Oil Producer by 2015