“After years of talk about reducing our dependence on foreign oil, we are actually poised to control our own energy future,” Mr. Obama said. …“That’s a big deal. That’s a tremendous step towards American energy independence,” he said.

The Energy Information Administration announced recently that in October, the United States produced more oil than it imported for the first time since February 1995,[i] due to increasing shale oil production and fairly level petroleum demand. According to the Washington Post, the White House took credit for the milestone issuing a statement that it was “a result of both increased production and Administration policies like increased fuel economy standards that cut oil consumption, cut carbon pollution, and cut consumer bills.”[ii] Administration officials also “credited the president with promoting drilling on federal lands and offshore as part of his strategy to encourage more U.S. energy production.”[iii] According to Energy Guardian, “President Barack Obama used his weekly radio address to argue that his green energy policies helped domestic oil production outpace imports last month for the first time since 1995.”[iv] Unfortunately, Obama Administration policies did just the opposite than what the Administration is touting for oil production on federal lands has declined by 18 percent between fiscal year 2010 and 2012, while over the same time period, oil production on private and state lands, where there is far less red tape, has increased by 14 percent. [v] U.S. oil production is increasing, but it is in spite of President Obama, not because of him. 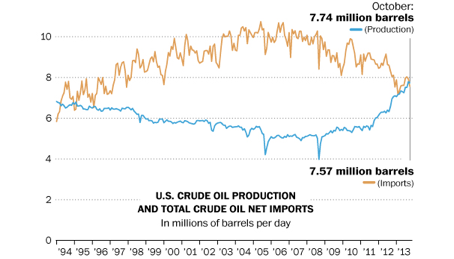 Oil production growth on private and state lands, particularly at shale formations in Texas and North Dakota, the top two oil producing states, is the major reason for the shift in production and import trends. Helping achieve the shift is a fairly level demand for petroleum products that has resulted from the recession and high oil prices, with many young workers opting for public transportation rather than owning vehicles.

According to the Energy Information Administration, there are 24 billion barrels of technically recoverable shale oil resources onshore in the lower 48 states. [vii] But this number can be viewed as being very conservative for the EIA is tasked to use government data where available. For example, in 1995, the U.S. Geological Survey estimated that the Bakken shale formation in North Dakota and eastern Montana held 151 million barrels of recoverable oil. But, in 2008, the USGS revised its estimate by a factor of 25, estimating that the Bakken holds 4.3 billion barrels—a resource figure the EIA uses in its reports and models. Oil experts, however, believe that the Bakken contains a lot more technically recoverable oil–20 billion barrels.[viii] Further, a new shale field, the Wolfcamp Shale formation in Texas, is touted to contain 50 billion barrels of oil, making it the largest oil field in the United States and the second largest in the world.[ix]  A decade ago, modelers did not include shale oil and gas in their forecasts because shale formations were not considered economic to produce. Due to the higher oil prices that have dampened oil consumption and the advent of hydraulic fracturing and horizontal drilling technology, shale oil and gas production is the leading source of new hydrocarbon production in the United States. 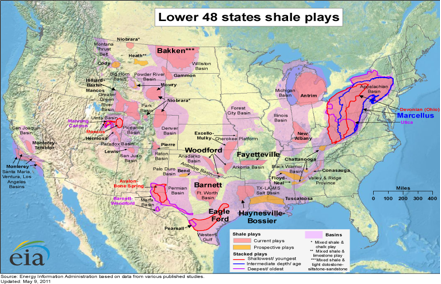 Oil and gas production in the United States is on the rise, but not due to federal government policies, but in spite of them. The production growth is taking place primarily on state and private lands due to far less red tape and much quicker processing times for permits. The increased production has brought prosperity to the states. For example, North Dakota’s unemployment rate is 3 percent, less than half the unemployment rate of the United States. With increased domestic oil production comes lower oil imports as oil demand in the United States has remained stagnant primarily due to high oil and gasoline prices, making consumers think twice about owning cars and taking that Sunday afternoon drive. The Obama Administration can try to take credit for the oil boom and the lessened dependence on foreign oil, but the data shows those claims are just more rhetoric.

The Impact the Government Shutdown had on the Energy Industry