The International Energy Agency (IEA) recently released its 2010 estimate of global fossil-fuel consumption subsidies—$409 billion, 36 percent ($109 billion) higher than in 2009.[i] This increase, however, is almost entirely due to the increase in international energy prices. Under current trends, it could reach $660 billion by the end of the decade (0.7 percent of global GDP).[ii] Oil subsidies make up almost half the total fossil fuel consumption subsidies, with electricity making up 30 percent, natural gas 22 percent and coal less than 1 percent.

Fossil fuel consumption subsidies measure what developing countries spend to provide below-cost fuel to their citizens.  That is, these countries artificially lower energy prices to their citizens, paying the difference from their government resources.[iii] Such welfare transfers are akin to the U.S.’s Low Income Home Energy Assistance Program (LIHEAP)[iv], and are differentiable from subsidies in the name of commercializing uneconomic energy sources such as on-grid wind or solar. The United States and other developed countries offer support to energy production in the form of tax credits or loan guarantees, which are not included in IEA’s fossil fuel consumption subsidy calculations since they are directed towards production rather than consumption of the fuel. 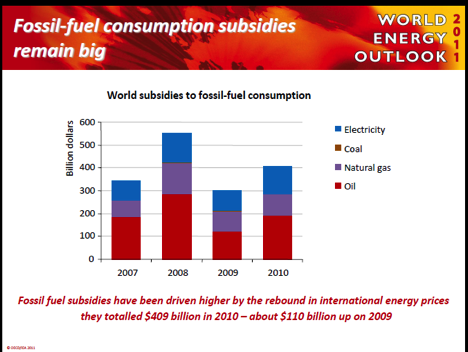 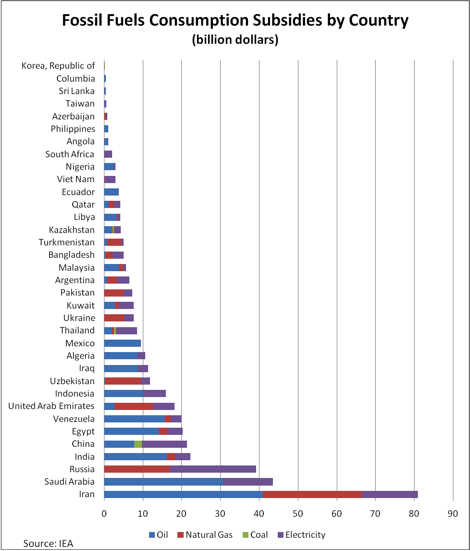 Fossil fuel consumption subsidies are often used to alleviate energy poverty, but are an inefficient means for doing so, creating market distortions that result in wasteful energy consumption.  In 2010, only 8 percent of the $409 billion spent was distributed to the 20 percent of the poorest population, demonstrating inefficiencies in assisting the poor.

Subsidies to biofuels totaled $22 billion in 2010, 6 percent higher than in 2009. According to the IEA, the cumulative cost of biofuels between 2011 and 2035 is expected to total $1.4 trillion to meet mandates for blending and other biofuel targets and to cover tax credits to the industry. Except in Brazil, biofuels are not cost competitive with oil-based conventional fuels and subsidies are required to meet legislative targets.

Many Americans are confused by the large amount of global fossil fuel consumption subsidies that the IEA calculates, not realizing that these subsidies have nothing to do with tax policy, research and development or loan guarantees, where most U.S. programs are directed. In fact, most liberalized countries do not offer fossil fuel consumption subsidies that artificially lower the end-use price of the fuel. Such subsidies are common and even pervasive, however, in the developing world, particularly in economies with state-owned energy companies.

These welfare transfers can be differentiated from subsidies in the name of commercializing or sustaining uneconomic energy sources such as on-grid wind or solar, which the United States and other industrialized countries have been heavily subsidizing. These forms of energy subsidies that help promote production of uneconomic energy sources can be abolished without detrimental affects to the U.S. economy or its citizens, and in fact would increase economic efficiency since by their very nature, they are more expensive than competing forms of energy.

Renewable Energy: Why Take Risk When Taxpayers Will Eat the Loss?