The International Energy Agency (IEA) is telling us what we already know[i]: the shale oil boom will make the global energy picture with the United States as the top oil and natural gas producer. According to the IEA, the United States will become the world’s largest producer of oil by 2017 overtaking both Saudi Arabia and Russia. By 2030, North America will become a net exporter of oil and, by 2035, the United States becomes almost self-sufficient in energy.[ii]

IER has long said that the United States has vast energy resources and we have emphasized that fact with publication of the North American Energy Inventory last December.[iii] What we needed was the policy and/or technology to make it happen. Because of the Obama Administration’s anti-fossil fuel policies, the growth that IEA is projecting is a result of technology. The IEA even hinted that this newly found U.S. energy independence could redefine military alliances, with Asian nations, instead of the United States, needing to secure oil shipping lanes.[iv]

The IEA also forecast that the United States will rely more on natural gas than either oil or coal by 2035 due to its cheap domestic supply and uses by industry and electricity generators. Electricity prices are expected to be about 50 percent cheaper in the United States than in Europe as a result of the increase in the number of power plants fueled by cheap natural gas.

Globally, the IEA indicates that fossil fuels will dominate the world’s energy picture as it has in the past. But, in the power sector, the agency believes that renewable energy (wind, solar, and hydroelectricity) use worldwide will be second to coal by 2035 due to technology improvements and continued subsidies. The IEA projects an increase in global renewable energy subsidies from $88 billion in 2011 to $240 billion in 2035.[v] 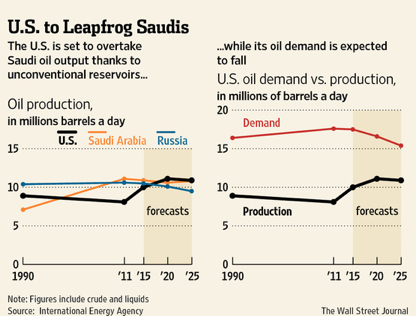 The IEA Forecast for the Oil Sector

The IEA expects global energy demand to grow between 35 and 46 percent from 2010 to 2035, depending on whether policies that have been proposed are put in place. Most of that growth will come from China, India, and the Middle East, where demand is growing rapidly. IEA expects fossil fuels to dominate the energy mix through 2035 and coal’s share of primary energy demand is expected to decrease only slightly by 2035. The U.S.’ reduced reliance on coal in the generation sector due to inexpensive natural gas means that coal will be used in other places, according to the IEA. The IEA expects China’s coal demand to peak around 2020 and then stay flat until 2035, and in 2025, it expects India to overtake the United States as the world’s second-largest coal user.[vii]

The IEA predicts that the Chinese real gross domestic product will increase by 5.7 percent per year between 2011 and 2035. The Chinese economy is expected to overtake that of the United States in terms of purchasing power parity soon after 2015 and in terms of market exchange rates by 2020.

IEA expects wind installations, solar facilities, and hydroelectric dams to become the second biggest power generator in 2015 and rise to almost a third of all generation in 2035, rivaling coal. The rise in renewable energy is due to subsidies, falling technology costs, rising fossil-fuel prices and carbon pricing. The Global Wind Energy Council expects installed wind turbines to more than double to 493 gigawatts in 2016 from 2011 levels and the European Photovoltaic Industry Association expects cumulative solar panel installations to triple to 208 megawatts in 2016 from about 70 megawatts in 2011, even though manufacturers of wind turbines and solar panels struggle with over capacity. To achieve this, the IEA expects global renewable energy subsidies to increase from $88 billion in 2011 to $240 billion in 2035.