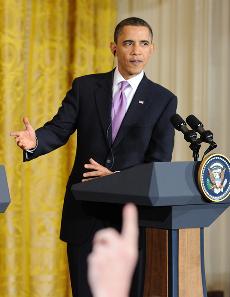 Washington, DC – Earlier this morning, President Obama delivered remarks at Andrews Air Force Base on offshore energy exploration and production, and what a scene it was. While many newspapers and cable news pundits cheered the announcement as a positive development, we at the Institute for Energy Research caution lawmakers, the media, and the American people from rushing to conclusions until all the facts are on the table. This is a huge step backward for America’s energy security.

Prior to today’s announcement, the vast majority of OCS areas were open for business. No longer. Today, while President Obama may have stated his support for increased energy development in the Eastern Gulf (which requires congressional action) and the Southern Atlantic (which he’ll study over the next year), he also announced that he would delay the development of the energy resources off Virginia’s coast and lock up vast resources off the Alaskan coast.

Additionally, those who cheer the President’s newfound support for domestic energy resources should remember that the very same President’s FY 2011 budget proposal includes upwards of $36 billion in new oil and natural gas taxes, which will discourage domestic production, especially in areas like the Southern Atlantic that have little to no existing infrastructure. While today’s rhetoric made for a good news cycle, the policy is not a step forward, but a huge leap backward.

“Just as he did in his State of the Union Address, President Obama cited the imperative of offshore energy exploration. But words alone will do nothing to move this country’s energy policy forward in a meaningful way. It’s similar to his announcement on nuclear loan guarantees—the President talked a good game, then eliminated funding for the only nuclear waste repository in the nation.

“In 2008, when Congress and then-President Bush retired the decades-old moratorium on the safe and environmentally sound practice of producing energy miles off the Atlantic and Pacific coasts, the American people, and our economy, scored a huge victory. Unfortunately, what President Obama outlined today puts part of that moratorium back in place. Kicking the energy can further down the road is not a change in policy.

“Canada drills for oil in the North Atlantic. Cuba, Brazil, and Venezuela produce energy in the water to our South. The Russians do the same to our West. Yet, America, the most technologically advanced nation in the world, with the most stringent environmental policies on the books, remains the only nation that imposes burdensome regulations and endless streams of red tape on domestic production. Americans want to stop embargoing our own oil. The president’s plan expands that existing embargo, and Americans will pay the price. ”

What the President announced today at-a-glance:

An Open Letter from American Association of Petroleum Geologists

IER Teams Up with AWEA, Sierra Club to Take Mother Earth to Court