President Obama stated that “The Republicans say they’re very concerned about drilling,” adding “Well, one of the things that happens when the government shuts down is new drilling permits aren’t processed.” This is similar to a short document released by Sen. Markey which blames “The GOP government shutdown is going to lead to decreased oil, gas and renewable energy production on public lands and costing taxpayers money.”

Both the President and Mr. Markey fail to admit that the President himself is to blame for the halting of permitting, well before the government shutdown. The federal government brings in billions of dollars a years from oil and natural gas leasing. In fiscal year 2012, mineral leasing (which includes oil and natural gas) brought in $12 billion to the federal government. If President Obama and Sen. Markey were serious about increase federal revenue they would be doing everything possible to continue leasing and even expediting leasing.

But oil and gas leasing under President Obama has been decreasing, even before the shutdown. The following chart shows the average number of new leases that the Bureau of Land Management issued during each administration. While the trend is down under all administrations covered, the Obama Administration had the lowest—half that of the Clinton Administration and a third less than the George W. Bush Administration.[vii] 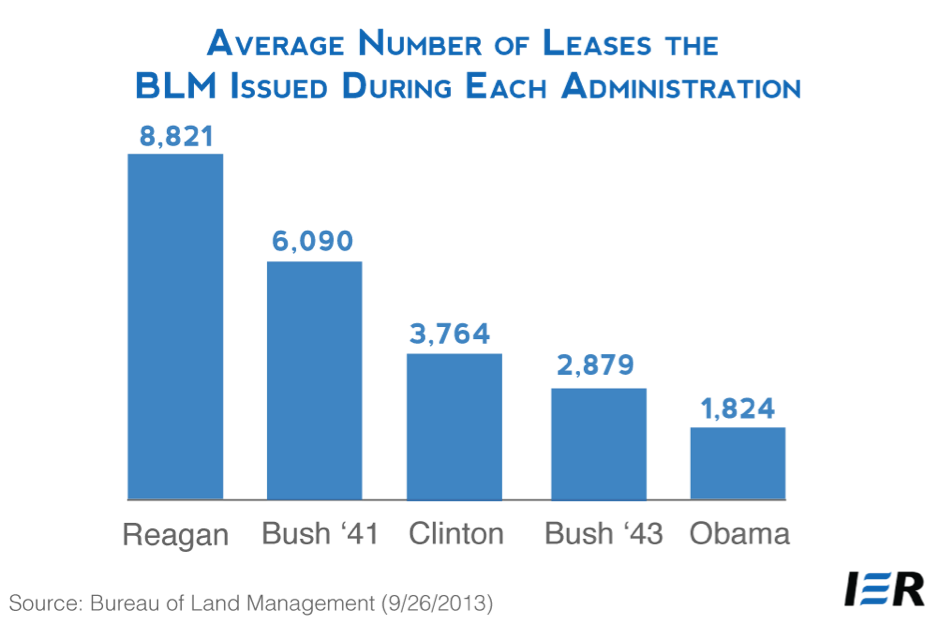 Over the past 5 years the Bureau of Land Management only issued 27,400 permits to drill compared to Texas which will award more than 23,000 this year alone. On a per-year basis, that means that the federal government is awarding less than one quarter  of the number of permits that the state of Texas alone is awarding.

If President Obama and Sen. Markey were serious about oil and natural gas development on federal lands, they would look to states like Texas. The Texas oil and gas regulators have reduced permitting times to 5 days per well and are shooting for 3 days. That compares to 228 days for the BLM.  And over 5 years for the government to make up its mind about the Keystone XL pipeline.

Oil and natural gas production generates tens of millions of dollars a day in tax revenues and more importantly, it generates over a billion  dollars in economic activity a day while providing good jobs for many Americans and keeping our economy moving. Stifling production on federal lands only harms the economy, but the real government shutdown has come not from this temporary fight in Washington, but policies supported by both Obama and Markey designed to deliberately make oil and gas production harder onshore and offshore, on federal and nonfederal lands throughout the US and North America.

Kentucky: How Green is the Bluegrass State?