Kentucky is the third largest coal producing state in the nation. It produces 10 percent of the nation’s coal with major coal deposits in the eastern Central Appalachian Basin and in the western Illinois Basin. These basins also hold minor reserves of oil and natural gas. Kentucky generates the vast majority of its electricity (92 percent) from coal, and is second only to West Virginia in this regard. As a result, it has the fifth lowest electricity prices in the nation.  Coal production and jobs, however, are disappearing rapidly from Kentucky.

Kentucky generates 3 percent of its electricity from renewable energy (hydroelectric and biomass). The Tennessee and Cumberland Rivers in the Ohio River Basin provide hydroelectric power potential. The state does not generate electricity using either wind or solar power and it does not have a Renewable Portfolio Standard that mandates the production of renewable electricity. While Kentucky has decided against mandating expensive, inefficient renewable energy sources, through the federal wind production tax credit Kentuckians help pay billions to subsidize wind production in other states that force people to buy such energy.

Kentucky’s per capita energy consumption is among the ten highest states in the nation. The industrial sector dominates the state’s energy demand, consuming 42 percent, and the state is a leader in the production of aluminum. 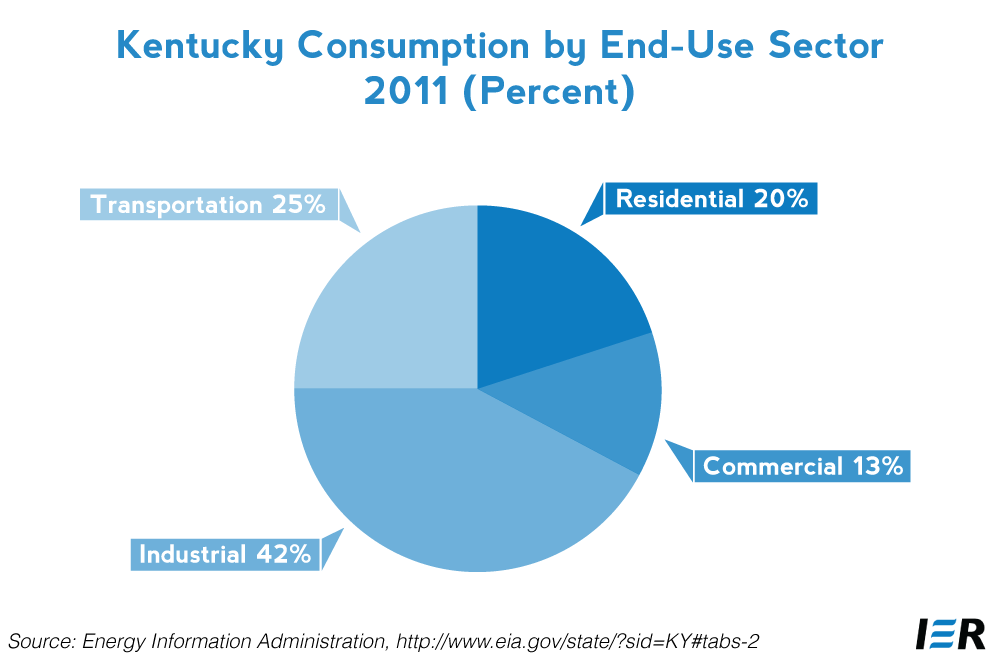 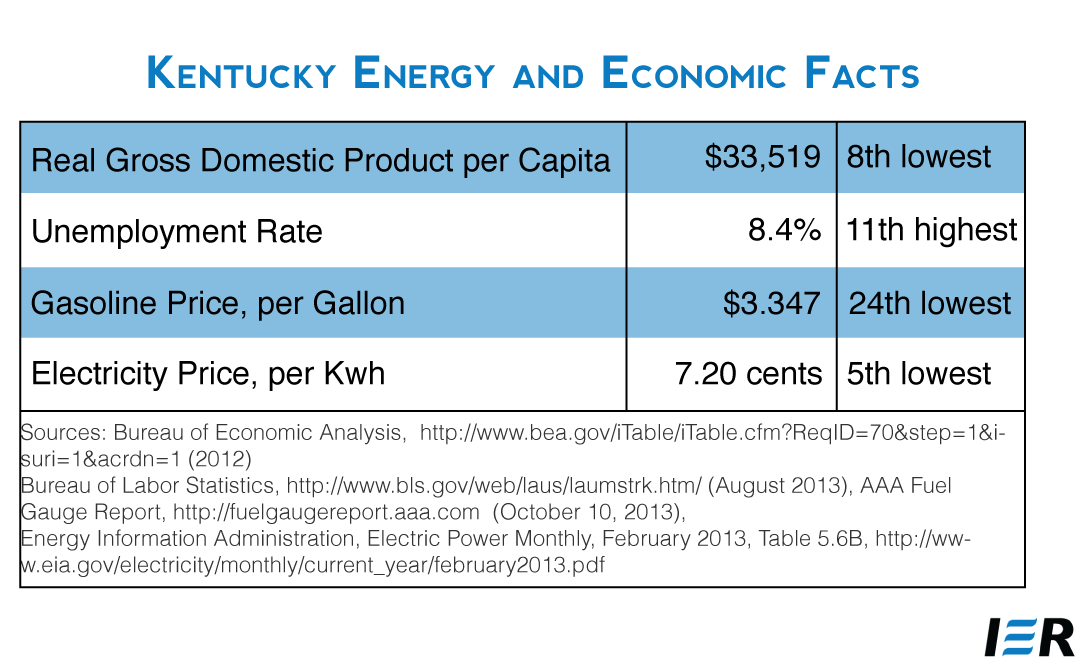 Kentucky is the third largest coal-producing State, after Wyoming and West Virginia. It accounts for roughly one-tenth of total U.S. coal production and nearly one-fourth of U.S. coal production east of the Mississippi River. In 2011, the state produced 108.8 million short tons from 400 mines. Kentucky’s recoverable coal reserves total 1,419 million short tons, 7 percent of the nation’s total. Although all Kentucky coal is bituminous, its sulfur content varies across the state. Coal produced in the Central Appalachian Basin is low in sulfur, while coal produced in the Illinois Basin is high in sulfur.

Nearly one-third of all the coal mines in the nation are found in Kentucky, more than in any other state. Kentucky has both surface and underground coal mines. Large volumes of coal move into and out of Kentucky by railcar and river barge. Kentucky delivers approximately three fourths of the state’s coal production to more than two dozen states, most of which are on the East Coast and in the Midwest.

Kentucky’s coal production, however, is declining (almost 10 percent between 2008 and 2011, according to Energy Information Administration data) due to onerous regulations from the Environmental Protection Agency and competition from natural gas in the electric generation market.

Nearly 95 percent of the coal used in Kentucky is burned for electricity generation, and most of the remainder is used in industrial and coke plants. 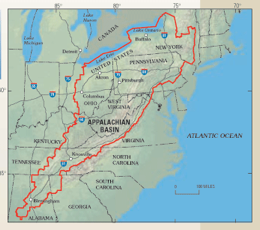 Industry is Kentucky’s largest natural gas-consuming sector, accounting for about one-half of total natural gas consumption in the state. About two-fifths of Kentucky households use natural gas as their primary fuel for home heating.

Kentucky produces minor amounts of crude oil-about 0.1 percent of the nation’s oil. It has two refineries, located in Catlettsburg and Somerset, with a combined operating capacity of 238,500 barrels per day. The Catlettsburg refinery is the larger of the two refineries and gets its crude oil supply from the Gulf Coast via the Capline Pipeline, which has a capacity of 1.2 million barrels per day. The smaller Somerset refinery processes crude oil produced regionally in Kentucky, Tennessee, and West Virginia. Kentucky also gets petroleum product shipments by pipeline and river barge.

Coal-fired power plants typically account for more than nine-tenths of the electricity produced in Kentucky, making it one of the most coal-dependent states in the nation. Only West Virginia has a larger share of coal in its generation mix. Two of Kentucky’s electric power plants, Paradise and Ghent, are on the 2010 list of the largest 100 U.S. power plants by capacity.

Due to regulations promulgated by the Environmental Protection Agency (EPA), more than 1,400 megawatts of coal-fired power plants will be prematurely retired by 2016. Almost 1,000 megawatts are from announcements by the operators of the units; the remainder are estimates from EPA models.

The remaining electricity generation within the state is mostly provided by natural gas and hydroelectric power plants. Kentucky does not generate any of its electricity using intermittent sources of power such as wind or solar. As a result, it has the fifth lowest average retail electricity price in the nation at 7.2 cents per kilowatt hour.

Over half of the states in the nation have renewable portfolio standards that require a certain share of generation to come from qualified renewable technologies. While those mandates have increased wind capacity and generation substantially, the federal government also provides a production tax credit to wind farms that offsets every kilowatt hour of generation by 2.3 cents, making them compete more favorably with less expensive generating technologies. According to the Energy Information Administration, new onshore wind units are about one-third more expensive than new natural gas-fired generation. Unfortunately for Kentucky tax payers, they are helping to support a more expensive technology that is mandated by other states because of this federal government subsidy.

Kentucky’s per capita consumption of residential electricity is among the highest in the United States. About half of Kentucky’s households use electricity as their primary energy source for home heating. 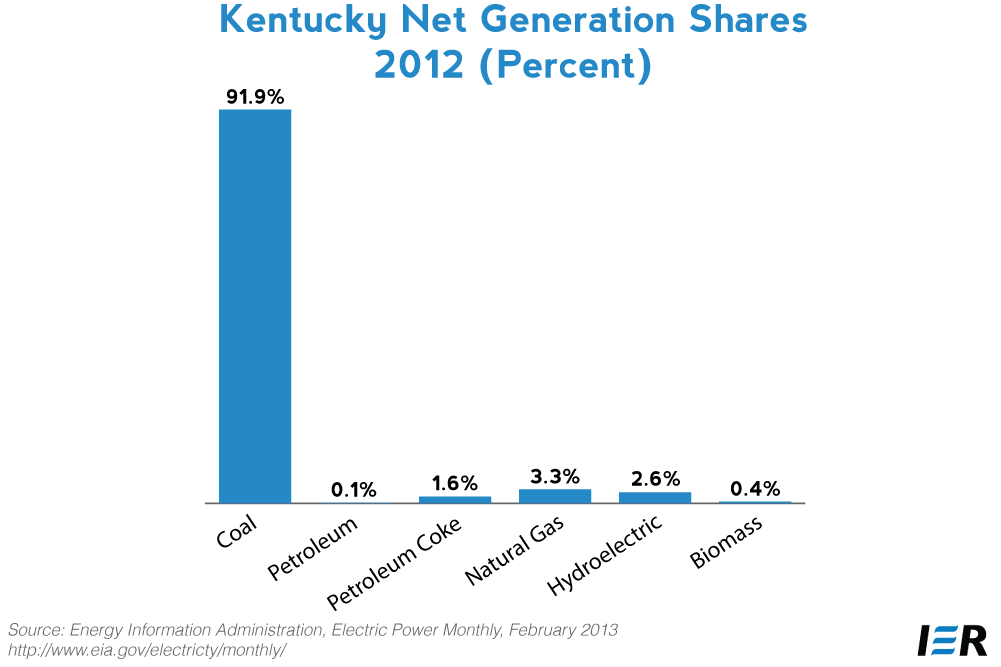 Below are some facts about Kentucky’s regulatory environment that are likely to affect the cost of energy or the cost of using energy. Although affordable energy is a vital component of a healthy economy, regulations frequently increase energy costs.

Unlike over half the states in the nation, Kentucky does not have a renewable portfolio standard that requires a certain percentage of it electricity generation to come from qualified renewable generating technologies.

Kentucky does not require gasoline to be mixed with renewable fuels. However, reformulated motor gasoline blended with ethanol is required in the Louisville metropolitan area and the Cincinnati metropolitan area.

House Bill 2, enacted in 2008, requires all public buildings for which at least 50 percent of the total capital cost is paid by the state to be renovated or designed to meet energy efficiency standards. New buildings must achieve certification from the U.S. Green Building Council’s Leadership in Energy and Environmental Design (LEED) standards. Larger and more expensive projects are generally held to a higher LEED standard. The legislation also requires that all building leases for the state or any of its agencies meet Energy Star high-performance building standards after July 1, 2018. Public buildings must purchase ENERGY STAR qualified products if life-cycle cost analysis determines they are cost-effective. House Bill 2 was re-codified in 2010 by House Bill 240.

Net metering in Kentucky is available to all customers of investor-owned utilities and rural electric cooperatives, but Tennessee Valley Authority utilities are exempt. In April 2008, Kentucky enacted legislation that expanded its net metering law by requiring utilities to offer net metering to customers that generate electricity with photovoltaic, wind, biomass, biogas or hydroelectric systems up to 30 kilowatts of capacity. Once the cumulative generating capacity of net-metered systems reaches 1.0 percent of a utility’s single-hour peak load during the previous year, the Public Service Commission can limit the utility’s obligation to offer net metering.

Kentucky is the third largest state producer of coal in the country, behind Wyoming and West Virginia. Coal generates 92 percent of the state’s electricity, the second highest share in the country behind that of West Virginia. As a result, Kentucky has the 5th lowest average retail electricity price in the nation, more than 25 percent less than the nation’s average electricity price. Unfortunately for its economy and job market, coal miners within the state are losing jobs because of competition from natural gas in the generating markets of other states and increasingly because of onerous regulations that the Environmental Protection Agency is promulgating.

Kentucky does not have a renewable portfolio standard and its electric utilities do not generate electricity from wind or solar power. But, the tax payers in the state subsidize the production of wind in other states that have Renewable Portfolio Standards through the federal government’s production tax credit for wind.  Intermittent renewable technologies, such as new wind and solar generating technologies, are more expensive to build and operate than new natural gas technologies.

The Rest of the Story Part 2: McKitrick on the Elusive “Double Dividend”

Obama's BLM Has Been in Shutdown Mode for Five Years