On Sunday, President Obama announced that he will recommend to Congress that it should designate 12 million acres in Alaska’s Arctic National Wildlife Refuge (ANWR) as wilderness.[i] When briefing the press about the plan, Presidential Advisor John Podesta said that regardless of the law and Congressional action, the administration was going to manage these 12 million acres as if it had been designated as wilderness by Congress. That means that ANWR will be unavailable to resource development.

In 1980, Congress set aside some of the acreage in ANWR (the “1002 area,” comprising the Coastal Plain) for future consideration of oil and gas exploration. After years of legally-mandated study, President Ronald Reagan in 1987 recommended to Congress that it should allow environmentally sensitive oil and gas leasing of the area. Congress voted on it numerous times, but only once sent a bill to then-President Clinton, who vetoed it. It has henceforth remained an open matter for Congress to decide. However, with a single stoke of a pen, President Obama is ordering federal employees to manage the entire area as if it was off limits. The timing is most interesting since the Republicans have taken control of Congress and would like to see ANWR opened to development, particularly since the Trans-Alaskan Pipeline System (TAPS) is down to less than a quarter of its capacity and needs oil to keep it in operational order. So, not only has President Obama for the past 6 years kept the Keystone pipeline from becoming a reality, he now has taken actions that show he wants to see the demise of TAPS.

The state of Alaska is dependent on oil, most of which flows through TAPS, for its economic well-being. An estimated one-third of Alaskan jobs are oil-related, and the oil industry accounts for about 85 percent of the state’s revenue. The destruction of TAPS and hence Alaska will be similar to (and in fact, may exceed) the impacts upon West Virginia and other coal producing states because of the destruction of the coal industry that President Obama’s EPA is heavily regulating in the name of climate change. 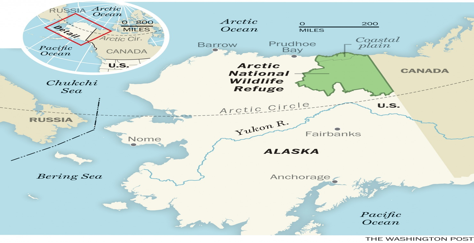 President Obama’s management plan, the Arctic NWR Comprehensive Conservation Plan declares 12 million acres in ANWR as wilderness, making it unavailable to oil and gas drilling, despite the fact that only Congress has the power to do so. In 1980, Congress passed the Alaska National Interest Lands Conservation Act, putting vast tracts of Alaskan land under protection, in return for a clause declaring “no more” wilderness designations in Alaska unless they were approved by Congress.

Obama’s management plan also recommends that four rivers within ANWR — the Atigun, Hulahula, Kongakut and Marsh Fork Canning — be added to the National Wild and Scenic Rivers System. Because only Congress can designate federal lands as wilderness or add waterways to the National Wild and Scenic Rivers System, President Obama plans to formally recommend to Congress that it approve the wilderness and wild and scenic river designations outlined in his Administration’s Comprehensive Conservation Plan. But, regardless, President Obama’s Department of Interior is expected to manage ANWR according to this plan.[ii]

While only Congress can create a wilderness area, once the federal government identifies a place for that designation, the area receives the highest level of protection until Congress acts or a future administration changes the plan. It becomes, in all respects, de facto wilderness. By managing the coastal plain as wilderness, the government prohibits motorized access to the area, including the construction of roads. Alaska has 58 million acres of wilderness–over half of all wilderness land in the United States–even before President Obama’s recent designation for the coastal plain and other areas of ANWR.[iii]

Further, President Obama’s Department of the Interior just released its latest five-year offshore drilling plan that limits 9.8 million acres in the Chukchi and Beaufort Seas to oil and gas drilling.[iv] These are areas north of TAPS that could be used to fill the pipeline with oil. Once production is started, TAPS would move that oil 800 miles south to supply the lower 48 states. These recent events limiting oil and gas production in ANWR and in the Arctic Outer Continental Shelf adds to a 2010 Obama Administration decision that closed nearly half of the National Petroleum Reserve-Alaska (NPRA)– a 23.5 acre area west of TAPS—and the Bristol Bay area—32.5 million acres[v]–to oil and gas development, even though NPRA has been specifically set aside for petroleum production. With ANWR now to be designated as wilderness, potential oil development east of TAPS will also be cut-off.

Despite saying that they might open offshore areas in Alaska for oil development, the administration will likely design regulations that cannot be met and therefore none of the areas will actually be allowed to produce oil. This would track with allegations that the Obama Administration has declared a “war on fossil fuels.”

But no one really knows how much oil there is until seismic testing is conducted and the oil is drilled. The two charts below shows the estimate of oil off the shore of Alaska compared to the amount of oil in the Gulf of Mexico. The first chart show the estimates made by the Minerals Management Service (MMS) for the reserve estimates offshore Alaska from 1996 through 2011. The estimate did not really change because oil companies were not allowed to look and therefore there was no new information. 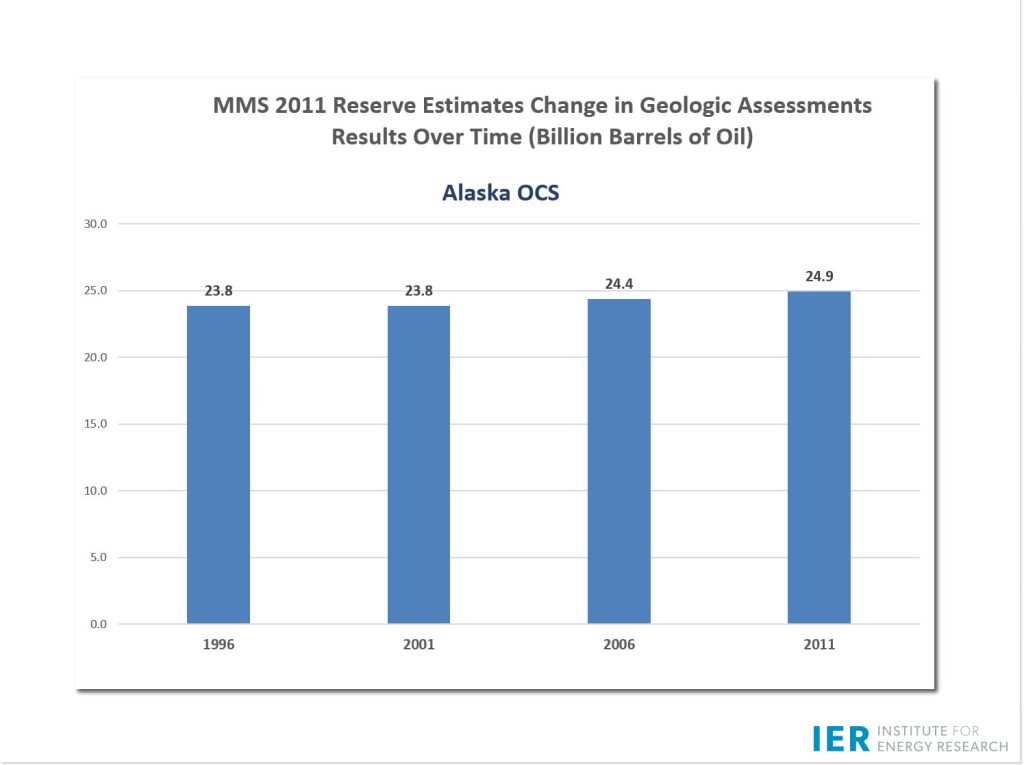 Below is the same type of chart for the Gulf of Mexico. In 1996, the MMS thought there were only 8.5 billion barrels of oil in the Gulf. But because companies were able to explore and drill for oil, the amount of oil in the Gulf almost sextupled in only 15 years. Keeping off-shore Alaska off-limits to oil and gas exploration keeps the resource estimates to those initially estimated by the government. It is likely that more oil would be found if companies were allowed to look. The environmental lobby has consistently sought to restrict exploratory activity which might lead to the discovery of new sources of energy. 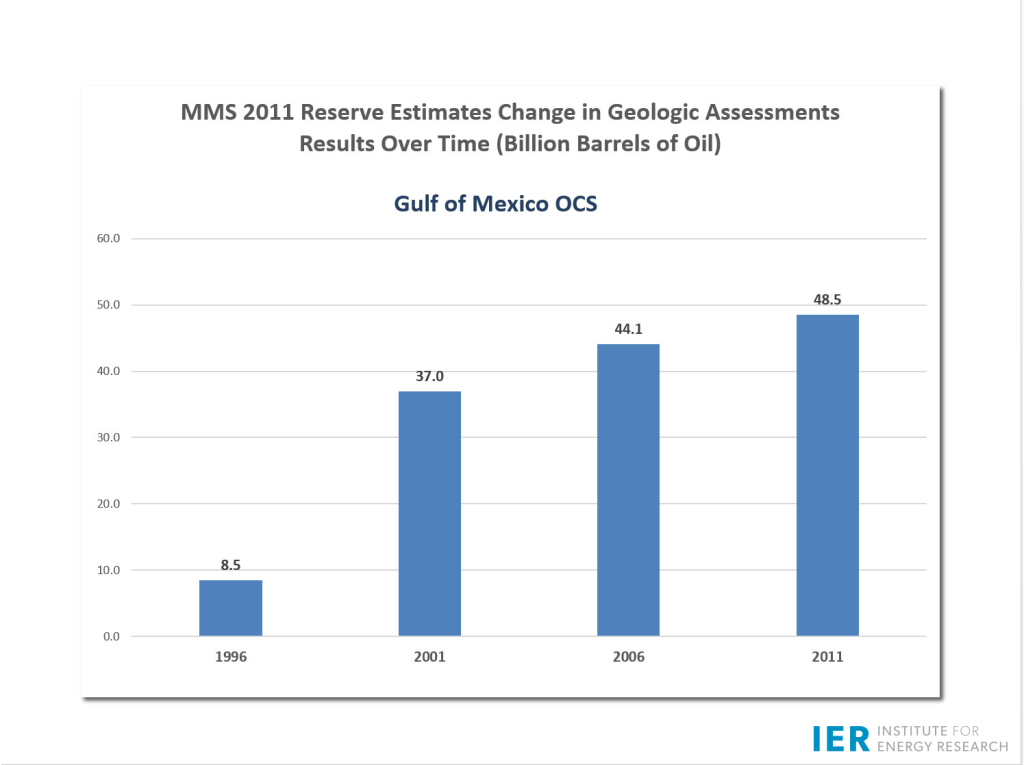 While the existing leases in Alaska are protected, new restrictions in the area could make developing these leases more difficult.[vi] And oil companies that already have leases in the NPRA and in the Arctic Outer Continental Shelf are faced with regulatory obstacles imposed by the Obama Administration. For example, ConocoPhillips has been waiting years for permits to access a lease it purchased in NPRA, which the Administration is expected to make more difficult soon. Shell has met obstacles from regulators in its attempt to drill in the Chukchi and Beaufort Seas, where it has already spent $6 billion, but has never been allowed to actually drill where the company expects energy resources to be.

The Trans-Alaska Pipeline System has a capacity of 2.2 million barrels of oil a day, but its volume is down to 500,000 barrels a day as the output of Alaska’s existing oil fields on state-owned lands is declining. Alaska’s Governor Bill Walker wants to accelerate oil and gas permitting on Alaskan state-owned lands to compensate for the federal failure to allow development of oil supplies in any of their massive landholdings onshore and offshore. Unfortunately for Alaskans, the vast majority of the state’s oil resources are estimated to be on the federal lands that President Obama is now blocking.

If the pipeline shuts down, it must be dismantled by law. Since the pipeline is the only way to get large quantities of Alaskan oil to the lower 48 states, shutting it down means closing a vast oil resource area of untold energy riches to exploration and development. Without a transportation system, no one would be interested in spending money to find new sources of energy for America.

Shutting TAPS would be a terrible blow to the economic welfare of Alaska. By his actions, Mr. Obama is unconcerned in the welfare of Alaska, and appears to be deliberately reducing the amount of oil available to Americans.

Mr. Obama has repeatedly claimed credit for the lower oil prices and the reduced gasoline prices we are now experiencing, despite his claim that America cannot drill itself to lower gas prices. However, the truth is that U.S. oil production output has increased on private and states lands and decreased on federal lands since Mr. Obama has taken office. Advances in oil and gas drilling have come from hydraulic fracturing and directional drilling technology that Mr. Obama’s Administration has had nothing to do with and is now looking for ways to regulate at the federal level. Like with the Keystone pipeline, Mr. Obama is hurting the energy security of the United States with these moves restricting areas to oil development.

The timing is interesting because with low oil prices, the President may think he can put this over the “stupid” American public as he was found to do with Obamacare. Hopefully, the American public can remember that oil prices have gone up before and will do so again. The fact is that the best way for our nation to ensure our continued growth and national security would be to seek out as many domestic energy sources as possible. We cannot control what happens in the rest of the world regarding the oil supplies that power our nation and every other nation around the world. But we can take control of our own energy future by finding out the true extent of our resources and taking responsible steps to ensure that those sources be made available to our nation far into the future.

President Obama is choosing another path entirely, pursuing policies that would limit our own supplies of energy and place us more at the mercy of foreign oil producers long into the future. The question for many is, “Why”?