States with oil production from shale oil formations have seen impressive revenue and job growth. In North Dakota, for example, the state’s economy is growing at 7 percent and its unemployment rate is a mere 3 percent — figures that should make most state governors envious. But, North Dakota is not alone in benefits stemming from oil production. Texas has a budget surplus of $8.8 billion that matches the record it set in 2007. The Texas economy has topped budget projections over the past 15 months, as energy output fueled job growth and an 11 percent fiscal first-quarter gain in sales-tax receipts, the biggest source of general-fund revenue in the state.[i] The story is simple—energy production creates economic growth creating thousands of good-paying jobs even during tough economic times.

Young adults with a college education are finding it difficult to find jobs in most areas of the nation where the unemployment rate for that age group is over 12 percent.[ii] Further, a recent Rutgers University study showed that the starting salary for a recent college graduate is $27,000, 10 percent less than five years ago.[iii] But in Montana, teenagers are foregoing college to work on oil rigs and other related jobs with salaries that can start at $50,000 per year.

The jobs in states embracing energy production not only include direct energy company jobs, but also support company jobs including the excavation, building and maintenance of oil wells, as well as construction of the hotels, apartments and camps for employees. Many of these companies offer $20 an hour to start, plus benefits. That contrasts with many jobs in the United States where benefits are only a dream to many workers.[iv]

This U.S. oil boom began in 2004 in North Dakota when hydraulic fracturing and horizontal drilling were combined and applied to a well, confirming that these technologies could unlock profitable amounts of oil in pockets deep underground. In horizontal drilling, a well is bored at an angle to run lengthwise along the richest slice of rock. Hydraulic fracturing uses a high-pressure stream of water, sand, and a few chemicals underground to crack apart the rock and free the crude. These technologies have made drilling faster, cheaper and better at obtaining oil from shale rock formations.

North Dakota is now the second largest state producer of oil, behind only Texas, and produces 747,000 barrels a day. Other states have followed the lead set in North Dakota’s Bakken shale basin. Texas, where the Eagle Ford shale basin is located, produces 2,100,000 barrels per day–the most oil production since 1987. Output from Wyoming increased 7 percent, the biggest jump in records going back to 1981. New Mexico’s output increased by 13 percent, and Oklahoma’s by 18 percent.[v]

Due to these technologies, U.S. oil production increased by a record 766,000 barrels a day in 2012, with an average of 6.43 million barrels per day produced–the highest level of domestic output in 15 years. Forecasters are predicting that the nation will surpass Saudi Arabia as the world’s largest oil producer by 2020 and that North America will become a net oil exporter by 2030. U.S. net petroleum imports in 2012 fell by 39 percent from the 2005 peak, now accounting for 41 percent of demand, down from its 2005 share of 60 percent. 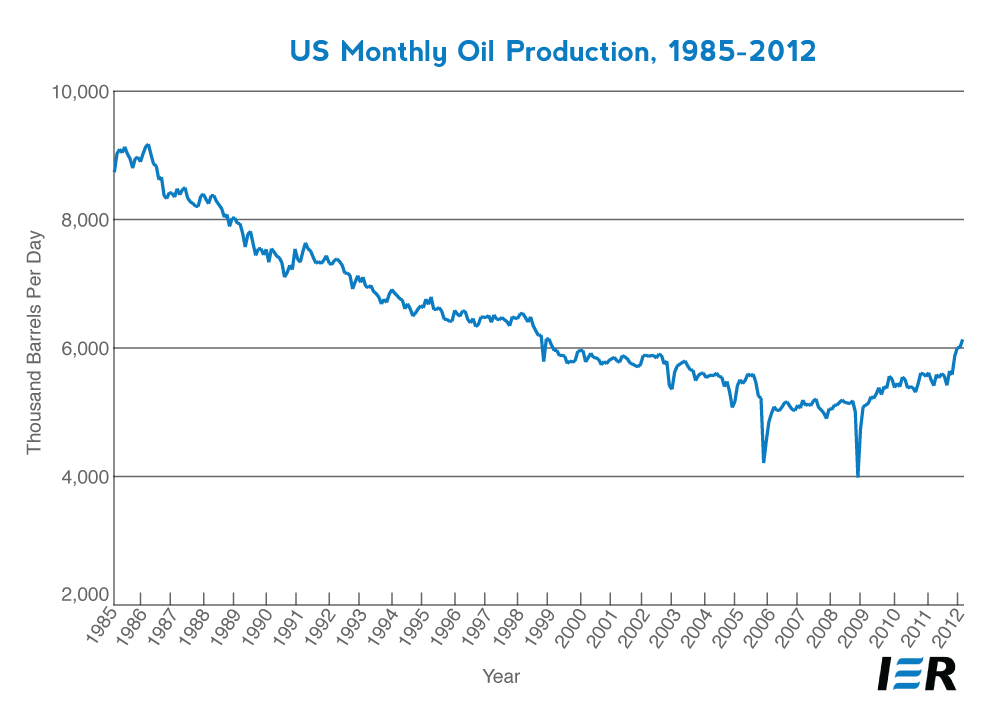 The most recent data from the Energy Information Administration supports these forecasted trends. In the week ended January 11, 2013, oil production increased to 7.04 million barrels per day, the highest level since January 1993. Oil production was 23 percent higher than a year ago. Further, the nation met 83 percent of its energy needs in the first 9 months of 2012, the highest annual rate since 1991.

Oil producers deployed as many as 1,423 rigs in 2012, the most rigs deployed in records going back to 1987. The increased oil production has resulted in a bottleneck in Cushing, Oklahoma that caused the 500-mile Seaway pipeline last year to undergo construction to reverse its flow to carry crude oil south to Gulf Coast refineries instead of north. By adding pump stations and other modifications, the capacity of the reversed Seaway Pipeline increased to 400,000 barrels a day this month from its previous capacity of 150,000 barrels per day.[vi] The Seaway Pipeline also has the support needed to move forward with construction of a loop (twin) of the Seaway Pipeline, designed to parallel the existing right-of-way from Cushing to the Gulf Coast and more than doubling Seaway’s capacity to 850,000 barrels per day by first quarter 2014.

The glut of oil in Cushing has been caused by increased oil production from North Dakota’s Bakken basin and imports from Canada. The Keystone XL pipeline was to aid the movement of the increased oil production from these areas but was delayed, denied, and delayed again by President Obama and the U.S. State Department because of the need to determine if the pipeline is in the ‘national interest’ since it would cross the U. S. border with Canada. In February 2012, TransCanada announced it would build the southern section of the pipeline, from Cushing to the Gulf Coast refineries, which does not need State Department determination and a Presidential permit. Construction of Keystone’s “Gulf Coast Project” began in the fall of 2012. The $2.3 billion southern leg is expected to be in service by mid- to late 2013.[vii]

Part of the issue with the delay was that the pipeline was to traverse a sensitive area in Nebraska. TransCanada, however, rerouted the pipeline away from the area. A report recently released by a state agency in Nebraska found the new route poses ‘minimal risks’ to the Nebraska’s environment, eliminating a hurdle to its approval.[viii]  And, Nebraska’s Governor Dave Heineman just announced his approval of the new route for the Keystone XL pipeline that avoids the environmentally-sensitive Sand Hills region.

Recently, ten governors and the premier of Saskatchewan wrote to President Obama asking him to approve the proposed Keystone XL pipeline and citing its importance to the two countries. The letter indicates that with the Keystone XL pipeline U.S. imports from Canada could reach 4 million barrels per day, twice what is imported from the Persian Gulf. And, the pipeline would also provide “critical infrastructure” to move oil from the Bakken in North Dakota and Montana.[ix]  In their view, the economic, energy and national security benefits of Keystone XL overwhelmingly support its approval.

The oil industry is providing much needed jobs here in the United States, but impediments from our federal government are causing oil production to be bottlenecked in Cushing, where it cannot be refined into products demanded by the American public. Our current pipeline capacity is being expanded and our railways are moving oil to refining facilities, but Cushing still remains a bottleneck. Approving the Keystone pipeline would help alleviate the oil glut at Cushing and move North America towards energy independence as forecasters are predicting.