The International Energy Agency (IEA) recently released its World Energy Outlook 2015. The report forecasts world energy production and consumption through 2040. The IEA argues that world oil prices will not return to $80 a barrel until 2020, that renewable energy along with nuclear power will make up 45 percent of electricity production in 2030, that Asia will drive continued increases in natural gas consumption, that China’s energy demand will begin to level off around 2020, and that India’s energy system will need an investment of $2.8 trillion over the next 25 years with the majority used to build its electricity system.

The International Energy Agency (IEA) predicts that oil prices will not return to $80 a barrel until 2020.[i] Further, the IEA warns that continued prices at low levels (around $50 per barrel) could lead to oil supply shortages in the future because the world will be forced to rely on Middle Eastern producers since most non-OPEC oil producers would be priced out of the market.

Low oil prices have produced “unprecedented declines in investment” in oil production and refining. Major oil companies canceled 80 projects worldwide this year because of low oil prices and cut capital spending by about $22 billion—20 percent. Investment is expected to decline another 20 percent next year, making the world again rely mostly on OPEC producers, risking a return to the strategic oil crises of the 1970s.[ii] 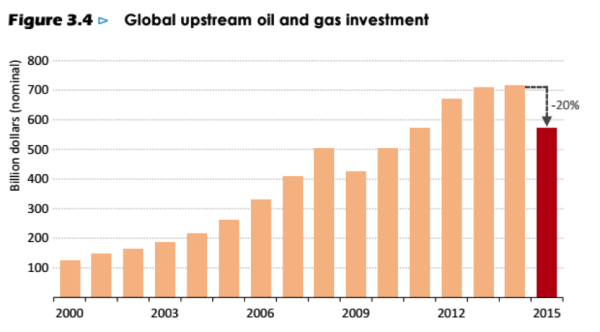 Low prices are forcing oil companies to abandon high-cost projects in the United States, Canada, Russia, Brazil and parts of Africa. IEA expects U.S. shale oil output to drop by 2.5 million barrels a day by 2020, eliminating more than half the gains made during the shale revolution. IEA believes that new shale drilling in the United States will pick up once prices reach $60 to $70 a barrel, but shale oil producers in Texas, indicate that the price may be closer to $50 to $55 a barrel as advances in hydraulic fracturing technology are cutting drilling costs. Below is IEA’s expectation of shale oil production in the United States between 2015 and 2020 based on varying oil prices. 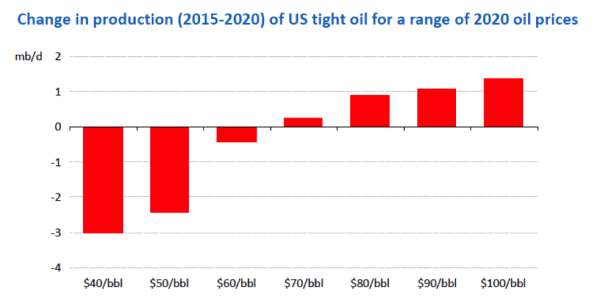 According to the IEA, the oil industry needs $650 billion in new investment each year to keep output steady as old wells are depleted and the decline rate steepens. If this 2-year drop in investment occurs, it will be the first time since the 1980s that investment will have declined for two consecutive years.

A protracted period of low oil prices near $50 a barrel would increase the Middle East’s hold on oil exports from 50 percent to 75 percent, leaving little spare capacity should a crisis arise. This highly concentrated level of oil exports from the Middle East will bring about energy security concerns with Asia being particularly vulnerable.

IEA expects America’s oil consumption to drop by a quarter by 2040 due to fuel efficiency standards (CAFE) for cars and trucks, cutting oil demand by 4 million barrels per day.

According to the IEA, renewables made up half of all new global electricity generation last year, and it is expected to account for 60 percent of all new investment in power over the next quarter century–a $7 trillion expansion. Renewables are expected to overtake coal around 2030, becoming the largest source of electricity. Wind power is expected to increase by 300 percent to 1,400 gigawatts and solar to increase 500 percent to 1,066 gigawatts. Solar energy made up just one gigawatt of electricity globally in 2000, but increased to 176 gigawatts last year.

Because the share of electricity generation from hydro, wind, solar, other renewables and nuclear increases to about 45 percent in 2030, carbon dioxide emissions from the power sector remain flat despite electricity demand growing by more than 40 percent. (See chart below.)

According to the IEA, the growth rate of global demand for energy will fall to just 1 percent a year by the 2020s (from 2.5 percent a year a decade ago) as consumption in the United States and the European drops in absolute terms, breaking down the linkage between energy use and GDP.

Globally, natural gas faces strong competition from renewable energy and coal. In the IEA forecast, developing Asia accounts for nearly half of the increase in global gas demand and 75 percent of the increase in imports by 2040.[iii] 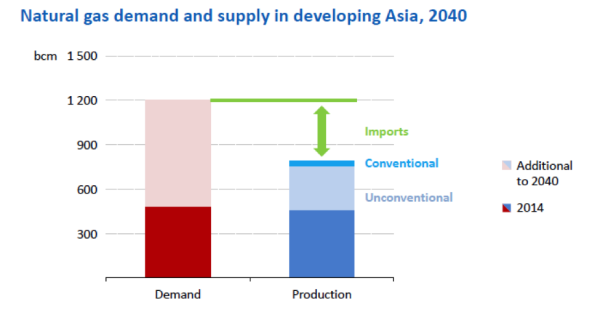 The IEA expects China’s energy demand boom–the largest in history–to be almost over as the country switches from a heavy industry economy to a service economy, requiring 85 percent less energy for each unit of future economic growth. The agency expects China’s energy use to start to flatten beginning in 2020, despite having 500 million vehicles on the road within a generation. By 2040, IEA expects China’s hydropower, wind and solar power to equal that of America and Europe combined, and supply nearly a third of its generation. China’s net oil imports are expected to be almost five times that of the United States. Despite the growth in shale oil, the United States is still expected to be a net oil importer in 2040.[iv]

The 240 million people living in India without access to electricity will drive the largest surge in global energy demand, overtaking China as the world’s largest user of coal and boosting oil demand to 10 million barrels a day–roughly equivalent to China’s daily demand now.[v] By 2040, India’s energy demand is expected to be close to that of the United States, but its demand per capita will be 40 percent below the world average. The IEA believes India will import 90 percent of its oil by 2040, as its production “falls well behind the growth in demand,” and will outstrip the oil imported into the European Union.

India’s policymakers and private sector will need $2.8 trillion to meet the nation’s energy needs over the next 25 years, and of that, about three fourths of it would go toward building power plants and boosting electricity capacity. India is expected to progressively shift into renewable energy, similar to China, but with a time lag. Renewables are expected to generate about a quarter of India’s power in 2040.[vi] 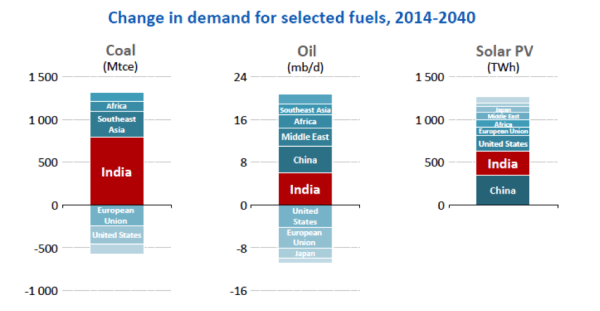 The International Energy Agency’s World Energy Outlook 2015 expects oil prices to remain around $50 a barrel until 2020, when they will each $80 per barrel. Low oil prices results in OPEC’s share of oil exports to increase from 50 percent to 75 percent, creating an energy security issue akin to the 1970s. U.S. shale oil production is expected to decrease unless oil prices reach $60 to $70 per barrel. The IEA expects China’s energy boom to taper off as it moves from a heavy industry economy to a service economy, allowing India to drive the surge in global energy demand, overtaking China as the world’s largest user of coal and boosting oil demand to 10 million barrels a day.