Fitch Ratings, a company specializing in research and credit rating analysis, examined the rule and released a report that found that American families living in states that use the most affordable energy sources, such as coal, will be hurt the most by the rule. According to Fitch’s report, Nebraska, Kansas, Tennessee, Missouri, and West Virginia are “most challenged” by the final rule, while coastal states like Washington, Oregon, Virginia, and Maine tend to be “least challenged.”

Purpose and Methodology of the Report

Fitch evaluated the stringency of EPA’s rule on particular states using the Fitch-calculated carbon cost recovery index (CCRI). This metric assesses the ease at which states (more specifically, utilities within states) can recover the costs that result from efforts to meet the carbon dioxide emissions reduction objectives of the final rule. In essence, compliance will be most challenging for “utilities that operate in states subject to sizable mandated carbon [dioxide]-reduction goals, high carbon [dioxide]-reduction costs and high electric costs.”[1]

The CCRI is calculated by creating a composite benchmark with four components, which are weighted to reflect their relative influences:

According to Fitch’s report, Nebraska, Kansas, Tennessee, Missouri, and West Virginia have the highest composite scores based on the CCRI and are “most challenged” by the final rule. Washington, Oregon, Virginia, Maine and Illinois are least challenged by the agency’s regulation.[3] The map below depicts how states rank on the index. 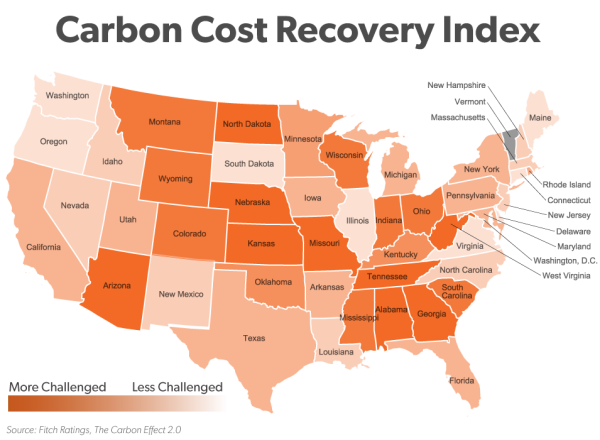 Even though retail electric rates impact how effectively states can respond to the carbon rule, the states with the highest electricity prices were incidentally those that fared better under the final rule (e.g., New Hampshire and Maine). However, states where average energy costs are high relative to median household income generally ranked poorly on the CCRI (e.g., Alabama, Tennessee, and West Virginia).[6] In other words, families in poorer states (who have a larger energy burden than people in richer states) will be disproportionately impacted by EPA’s rule, in general.

Fitch’s report shows that states with coal-centric generation mixes are, in general, the most severely impacted by the regulation of carbon dioxide emissions. As IER has previously detailed, EPA’s final rule shifts the primary burden onto states that generate significant amounts of electricity from coal-fired power plants. Those with coal-centric generation mixes received stricter emissions reductions from EPA. Conversely, states that rely more on natural gas, nuclear, and renewable resources were given less onerous reduction goals.[7]

There are a number of problems with closing affordable and reliable power plants. For example, an IER study calculated the levelized cost of electricity (LCOE) for existing generation resources and found that new sources produce electricity more expensively than existing sources of the same type. Furthermore, electricity from new wind facilities is nearly three times more expensive than electricity from existing coal plants. In the end, prematurely closing existing power plants destroys things of value and places a cost premium on energy for consumers because many of those power plants (primarily coal-fired) could remain economical for decades.

EPA’s carbon rule will negatively affect most states, particularly those that are reliant on electricity generation from coal. As Fitch’s report demonstrates, a number of states received more stringent carbon emissions reduction goals under the final rule, which will make it even harder for them to comply with EPA’s regulation. In states that submit state implementation plans, utilities will most likely pass on the costs to American households, and lower-income families with a large energy burden will be disproportionately impacted by high electricity prices. States should seek to “do no harm” and wait until legal challenges to the rule are decided before encumbering their constituents with hefty compliance costs.

[2] See, p. 8 of the report for Fitch’s discussion of compliance costs and how, if EPA’s assumptions prove overly optimistic, these costs could be substantially higher than EPA has anticipated.

Oil Prices Will Remain Low Through the End of the Decade