American refineries are closing and more closures are likely, often because of overly-burdensome regulation as well as lower gasoline demand. Several refineries in Pennsylvania are idle and possibly closing if no buyers come forward. The refining industry is one of the most highly regulated in the country and has been struggling for years to maintain minimal profit margins. In the face of even more regulations from the Environmental Protection Agency (EPA), who are, imposing carbon-emission regulations as well as proposing overly-strict ozone regulations and other regulations, more closures are likely. Not only do EPA’s federal standards impose burdens on the industry, but state and local regulators are also part of the problem.[i]

The Clean Air Act of 1970 was the first regulation to significantly change the refinery industry by prohibiting lead additives in gasoline. Later amendments were added that created oxygenated and reformulated gasoline bringing about the “boutique fuel” issue. Each of these fuels are available in 3 grades (regular, mid, and super) and are adjusted for winter/summer and northern/southern driving conditions.[ii] When refineries must switch over from winter grade to summer grade gasoline in the spring, motorists have historically seen gasoline prices rise. 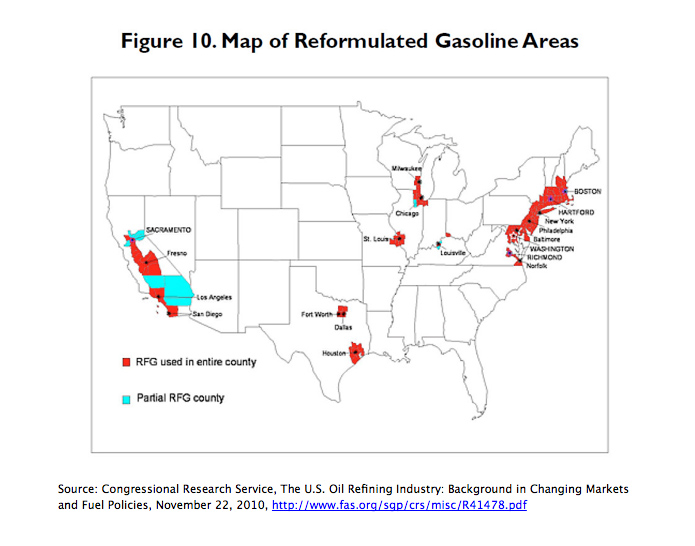 The Energy Policy Act of 2005 amended the Clean Air Act and limited the number of boutique fuels to those existing as of September 1, 2004. The Boutique Fuel Reduction Act of 2009 further amended the Clean Air Act to provide temporary waivers for unexpected problems that would not allow delivery of the additives and to allow the EPA Administrator to reduce the number of boutique fuels if any became identical with a federally approved fuel or was no longer included in a SIP.

Between 1992 and 2005, oxygenated fuel blends were required by EPA to reduce ground-level ozone and smog. At that time, methyl tertiary-butyl ether (MTBE) was used as the oxygenate for states other than the Midwest and ethanol was used as the oxygenate in the Midwest. MTBE and ethanol served as an octane booster, a volume extender in gasoline, and as the oxygenate for reformulated gasoline. Later, MTBE was banned in many states because of ground water concerns, leaving ethanol as the most cost-effective oxygenate. While MTBE could be blended at the refinery, ethanol, because of its corrosive nature, has to be blended at the storage facility where the fuel is dispensed to the fuel truck.

The Energy Policy Act of 2005 created the Renewable Fuel Program that mandated the use of renewable fuels in gasoline. That act required the production of 7.5 billion gallons of renewable fuels for 2012. The Energy Independence and Security Act of 2007 increased the target volume to 36 billion gallons by 2022, mandating that 15 billion gallons could be from corn-based ethanol and the remainder had to come from advanced biofuels, namely cellulosic ethanol. EPA administers the program and can lower the targets for cellulosic ethanol if not commercially available. However, the lowered EPA targets are still difficult for refineries to achieve since cellulosic ethanol does not exist commercially. As a result, refiners have had to purchase waivers, needlessly increasing the cost of gasoline. The penalties are estimated to be $6.8 million in 2011 and higher for 2012 since EPA is mandating that 30 percent more of the nonexistent fuel be purchased by refiners.[iii] EPA has also determined that vehicles of model year 2001 or newer can use a blend of 15 percent ethanol and 85 percent gasoline without hurting those engines. Currently, the maximum blend is 10 percent ethanol and 90 percent gasoline. 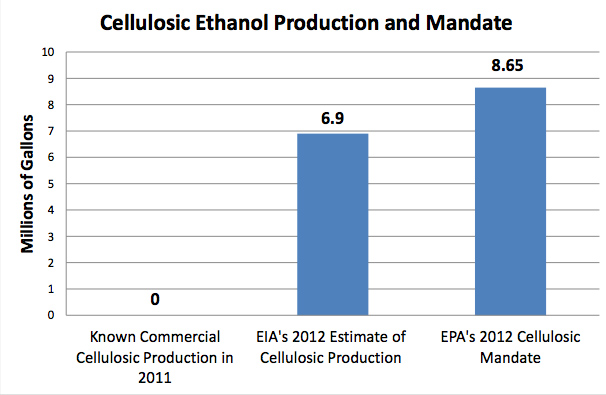 In 2007, the Supreme Court ruled that the EPA had the authority to regulate carbon dioxide emissions under the Clean Air Act. In response to the FY 2008 Consolidated Appropriations Act, EPA required suppliers of fossil fuels, manufacturers of vehicles and engines, and facilities that emit 25,000 metric tons or more of greenhouse gas emissions annually to submit reports to EPA (the Mandatory Reporting of Greenhouse Gases Rule). The rule provides the basis for future legislation or regulation to limit greenhouse emissions from refineries and other industrial users.

While a ‘cap and trade’ program to limit greenhouse gases did not pass in Congress as the Obama Administration had wanted, because of the Supreme Court’s ruling allowing the EPA to regulate carbon dioxide emissions, additional regulations are being levied upon industries.

Among the upcoming regulations for refineries are Tier III and emission standards for refineries and U.S. smog and particulate matter air-quality standards. Since 2004, when EPA’s Tier II standards were implemented, refiners cut sulfur levels in gasoline by 90 percent, from an average of 300 parts per million in 2004 to an average of 30 ppm today, at a cost of $10 billion.[iv]  EPA’s Tier III rules would cut the sulfur content of gasoline more from 30 to 10 parts per million.  A report conducted by Baker and O’Brien for the American Petroleum Institute (API)[v] found that the rule would add $2.4 billion in annual compliance costs, resulting in an increase of  6 to 9 cents per gallon of gasoline.[vi] Achieving the incremental sulfur reduction would require large capital investments in equipment that would emit more carbon dioxide and could lead to as many as seven additional refinery closures.[vii]

U.S. refiners are closing plants that have become uneconomic. In recent years, refineries closed in Westville, New Jersey, and Yorktown, Virginia and this past December a large refinery in southeastern Pennsylvania and one in New Jersey were shuttered.[viii]

Two refineries in Pennsylvania with a joint capacity of 363,000 barrels per day owned by Sunoco and Conoco Phillips were recently idled due to losses resulting from increased regulatory requirements and lower demand for petroleum products.  Sunoco estimates that environmental regulatory costs represent about 15 percent of its operating budget. The two idled Pennsylvania refineries along with a third Sunoco refinery still operating in the Philadelphia area employ 1,200 workers and almost as many salaried and contract workers, manufacturing 50 percent of the petroleum fuels produced on the East Coast of the United States.[ix]   However, while these refineries are experiencing losses and two are idled, there seems to be some recent interest.

Energy Transfer Partners and Sunoco have entered into a merger agreement where Energy Transfer Partners will acquire Sunoco for $5.3 billion, creating one of the largest and most diversified energy partnerships in the country. According to Sunoco, its Marcus Hook plant, which it idled in December, will remain closed under the merger.  Its Philadelphia refinery, which is the largest on the East Coast, is still operating, employing about 850 workers.[x]

The Conoco Phillips refinery in Trainer, Pennsylvania produces 185,000 barrels a day.[xi]   Over the last 10 years Conoco Phillips invested 100 percent or more of its profit into its Trainer refinery to meet regulatory requirements and has lost money in each of the previous three years.[xii]  Delta Airlines just purchased the Conoco Philips facility as a hedge against increasing jet fuel prices for $150 million. Delta plans to invest $100 million in maximizing the refinery’s jet fuel output, cutting the airline’s fuel bill by $300 million a year.[xiii]

A major Caribbean export refinery supplying the East Coast (Hovensa’s U.S. Virgin Islands refinery) has closed.  The Hovensa refinery in the U.S. Virgin Islands was located in a region that was in attainment with the Clean Air Act.   However, EPA required the company to spend an additional $700 million replacing turbines.  After losing $1.3 billion in last three years, the refinery could not afford the additional regulatory compliance costs.[xiv]

According to a March 2011 Department of Energy report, in the past 20 years, federal regulations were a significant factor in the closing of 66 U.S. refineries. (See chart below.) Refinery closures and the recession have led to a loss of over 3,000 direct jobs and 506,000 barrels per day decrease in capacity. 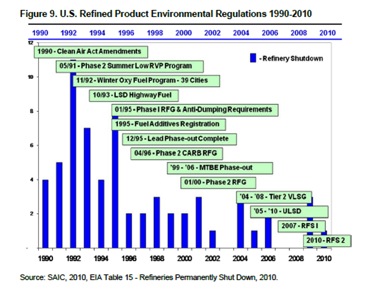 According to the Energy Information Administration, the recent refinery idlings and closures have not affected markets so far because the loss of fuel from the Sunoco and ConocoPhillips refineries has been partially offset by the start up of a refinery in Delaware City, Delaware, that opened in October 2011. The refinery had been shut down for two years by Valero and was recently purchased by PBF Energy, which is attempting to make a profit from it.[xv] However, according to PBF Energy chairman, Tom O’Malley, under Tier III, the sulfur removed from PBF’s total gasoline production at its three refineries, which produce about 4.5 billion gallons, would be less than one-eighth of what a 500 megawatt coal plant emits in a year, questioning the benefits of the EPA’s latest refinery rule.[xvi]

The closures and potential closures mark a change taking place in the refinery business, due to the differences in the prices of different crude oil grades from different global producing areas. U.S. east coast refiners pay a higher price for imported crude than other U.S. refiners using Canadian or domestic crude. Other problems affecting the refinery industry are lower demand for gasoline, increasing volumes of ethanol, improvements in vehicle fuel efficiency, permitting delays, and policies to encourage the purchase of electric and other alternate fuel vehicles. Some researchers believe that the United States and other developed nations have reached “peak travel,” and that the number of miles driven per year is not expected to increase as it has in the past.

The U.S. refinery industry has spent $128 billion since 1990 to comply with federal environmental regulations[xvii], which adds significantly to the costs of manufacturing refined products.  Historically, refiners have supported regulations that were clearly beneficial to the environment.  However, as environmental standards are tightened, the cost to meet those standards increases exponentially, threatening the competitiveness of American refineries in the global marketplace.

According to Bill Klesse, former Chairman of the National Petroleum and Refiners Association, overregulation is not only likely to cause expansion of existing plants to slow down if not stop altogether, it could curtail improvements to those facilities. That was a warning he made 2 years ago. But the warning is not being heeded by the Obama Administration and his Environmental Protection Agency. According to Environmental Protection Agency (EPA) official, Region VI Administrator Al Armendariz, EPA’s “general philosophy” is to “crucify” and “make examples” of oil and gas companies.[xviii]

Bob Greco, API downstream and industry operations director, well-stated what the regulatory situation should be:

“We must be sure that new regulatory proposals are necessary, properly crafted, practical and fair to allow US refiners to remain competitive, preserve good paying refinery jobs and ensure our energy security.”

That should be true of all regulations.