The report is new, but the content is not.  This week, Representative Ed Markey (D-Mass.) released a report rehashing old claims that oil and gas companies are “stockpiling” federal energy leases, ostensibly as part of a conspiracy to manipulate prices by keeping supply low.  Markey, who is Ranking Member of the House Natural Resources Committee, argues that the “Use it or Lose It” report shows that new energy-rich areas like Alaska should not be opened for drilling, because oil and gas companies already have enough idle leases that are not being utilized.  The report, however, fails to make a key distinction: that some leases are more valuable than others, and that the most valuable areas of the federal land estate all aren’t being offered for lease.  An analysis of the report’s central claims is below.

FACT: Just because a lease is bought, doesn’t mean it will yield oil and gas.

Companies often purchase leases for millions of dollars without knowing what their full resource potential will be.  It is usually only after seismic mapping and exploratory drilling that the company is able to determine whether a commercial amount of oil and gas may be present.  Even in these circumstances, past data shows that companies have drilled more wells that have no oil or gas than wells that do.

As such, odds favor purchasing larger quantities of leases that hopefully result in one discovery with a big payoff.  The graph below illustrates this: 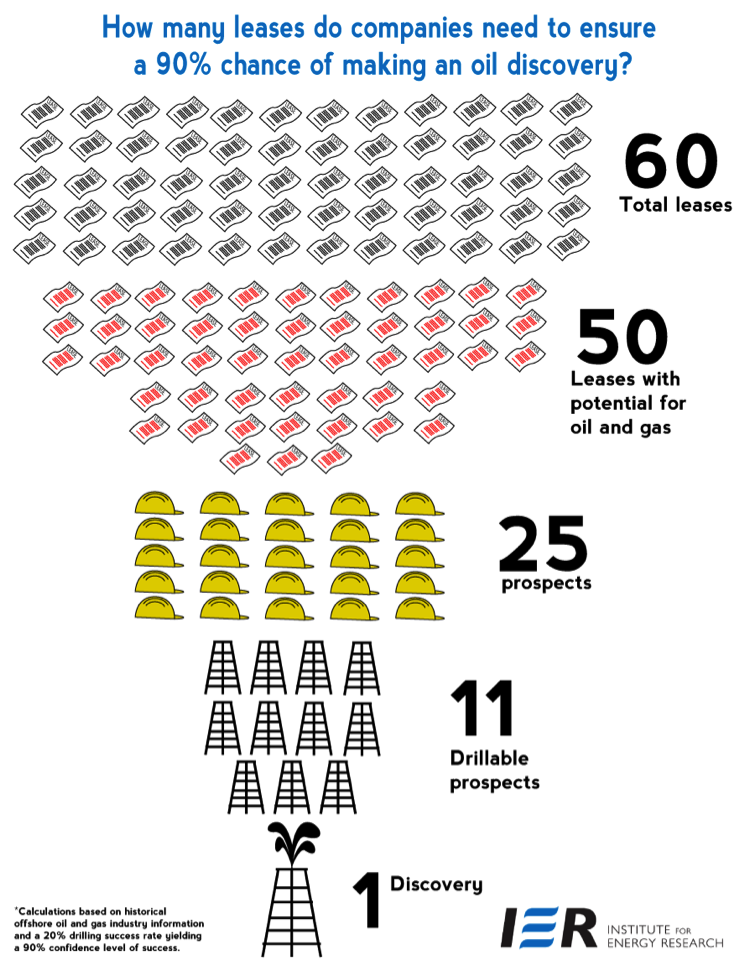 FACT: Many of the most energy-rich lands the federal government owns are off-limits to domestic energy production.

MARKEY’s MYTH: We need a “Use it or Lose It” policy to spur companies to produce, and we should penalize companies for sitting idle on leases.

FACT: A “Use it or Lose It” policy already exists (see below).  And if the companies do not produce within the lease term, they must relinquish the lease and do not recover the millions—or billions—they spent to acquire the lease.

Under new Department of Interior policies, rental rates escalate over time, the minimum required bid in offshore lease auctions was nearly tripled, and lease times for drilling in shallower water were shortened.[6]

MARKEY’s MYTH: Half of deepwater leases in the Gulf of Mexico have been idle for 5 years or more.

FACT: The term “idle” erroneously suggests that nothing is being done with the leases.

In cases where an exploration has been submitted but not yet approved by the federal government, those leases are still listed as “idle.” The same goes for leases that are undergoing seismic testing or awaiting the arrival of drilling equipment.

FACT: It takes a year on average to obtain approval for an exploration plan.

As of May 2012, the average wait time between the time an exploration plan for offshore drilling is submitted and the time it is approved is 367 days (160 days on average for an application to be “deemed submitted” and 207 on average for a plan to be approved).[7]

FACT: Each offshore lease takes years and millions or billions of dollars to fully develop.

Companies must undertake a lengthy and costly process involving geological mapping, testing, and drilling exploratory wells before production can begin.[8] This process can also be significantly delayed by environmental litigation.

MARKEY’s MYTH: Idle leases covering more than 20 million acres in the Gulf of Mexico are estimated to hold as much at 18 billion barrels of oil—therefore, each lease should be produced on.

FACT: Each lease doesn’t contain a uniform amount of oil and gas.

According to the National Ocean Industries Association, Interior seems to be arguing that each and every lease block holds the same potential for oil and natural gas production.  In reality, oil and gas reservoirs are not consistently, evenly distributed under every square mile of the Gulf—or any area—and they do not conform to man-made partitions.  As such, companies do not drill wells in every lease block that is offered. NOIA reinforces this point, saying, “commanding oil and gas companies to drill a well in every lease block would not necessarily lead to greater production overall; it would only create a lot of unnecessary dry wells.”[9]

[1] See Bureau of Ocean Energy Management, Regulation and Enforcement, Offshore Energy and Minerals Management, http://www.boemre.gov/offshore/. According to the administration’s website, the outer continental shelf is 1.76 billion acres (http://www.boemre.gov/ld/PDFs/GreenBook-LeasingDocument.pdf page 1) and only 38 million acres are leased (Department of Interior, Oil and Gas Lease Utilization – Onshore and Offshore, http://www.doi.gov/news/pressreleases/loader.cfm?csModule=security/getfile&pageid=239255 page 4). That is a mere 2.16% of the entire Outer Continental Shelf.

[6] U.S. Department of the Interior, Oil and Gas Lease Utilization, Onshore and Offshore Updated Report to the President, May 2012, available at http://www.doi.gov/news/pressreleases/loader.cfm?csModule=security/getfile&pageid=296238.

[7] SMU Maguire Energy Institute, “The Outlook for Energy Production in the US Gulf of Mexico,” May 2012, http://www.noia.org/website/download.asp?id=53442

[9] National Ocean Industries Association, “ ‘Use It or Lose It’ is a Solution in Search of a Problem,’” http://www.noia.org/website/article.asp?id=42911.

use it or lose it