Russia was the world’s second-largest oil producer in 2011, behind Saudi Arabia. Due to its use of multiple stage hydraulic fracturing and horizontal drilling technology, Russia is increasing its oil production in 2012, the Energy Information Administration reports. This is the same technology that is used in the United States to produce record amounts of natural gas and to increase domestic oil production. It is also the technology that the Obama Administration wants the federal government to regulate, although state governments have been doing so effectively for decades. 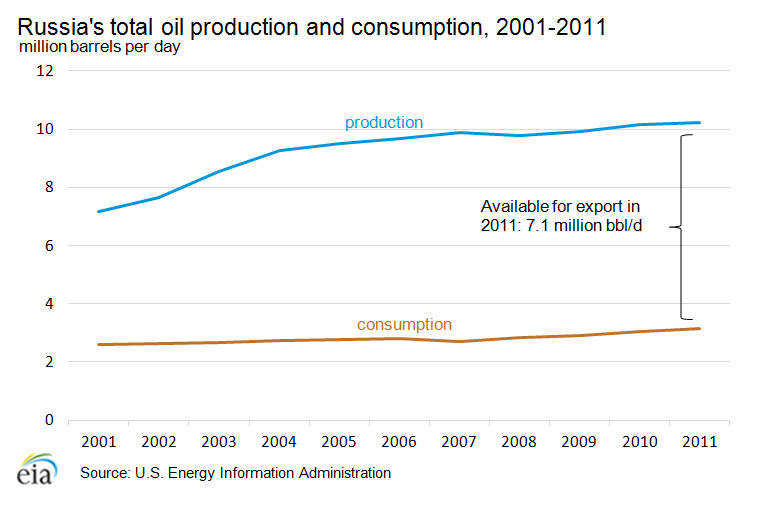 Technology has helped Russia continue to produce oil from its mature oil fields, several of which have been in decline. West Siberia is Russia’s main oil producing region, accounting for almost two-thirds of Russia’s total production. Many of the largest Western Siberian fields have been declining, although new applications of existing technologies have boosted recovery rates. For example, LUKoil, Russia’s second-largest holder of oil reserves and oil-producing company, is using multi-zone hydraulic fracturing to halt its declining crude oil production at several of its oil fields in Western Siberia. Similarly, TNK-BP, Russia’s third largest oil-producing company, reduced a decline rate in one of its West Siberia fields to 7 percent in 2011 and expects to lower it further to 1 percent by 2016.[i]

Hydraulic Fracturing and the Obama Administration

In April, the Environmental Protection Agency (EPA) required drillers to capture emissions of certain air pollutants (volatile organic compounds and methane) from new wells. Drillers can burn the pollutants at the wellhead until the start of 2015, when EPA expects that enough equipment will be available to capture the pollution.[ii] The original proposed rule issued by EPA in 2011 did not have the delayed start to 2015 and was estimated to reduce oil production from hydraulically fractured wells by up to 37 percent and reduce federal royalties by $8.5 billion and state severance taxes by up to $2.3 billion due to reduced drilling and production.[iii]

In May, the Department of Interior issued a proposed rule superseding state regulation of hydraulic fracturing for oil and natural gas produced on public and Indian lands.[iv] Currently, state laws regulate hydraulic fracturing on lands within their borders. The new rule by the Department of the Interior would create additional regulations and red tape for drilling on federal and Indian lands. The new rule requires the disclosure of the chemicals used in hydraulic fracturing that many states already have initiated, additional testing of oil and gas well construction, and a management plan for the water used in the process.[v]  These requirements are in most cases, duplicative, but most concerning to those who operate on federal or Indian lands, they grant the federal government the ultimate authority for issuing permits.  The federal government is notoriously slow in issuing those permits and in many cases involving high capital expenditure activities, delay in issuing permits can amount to denial or in the very least, increased costs that would be transferred to the consumer.

This proposed rule would affect drilling operations on 700 million acres of public land administered by the Bureau of Land Management and 56 million acres of Indian lands. According to the Interior Department, 90 percent of the 3,400 wells drilled each year on public and Indian lands use hydraulic fracturing where water, sand and chemicals are injected under pressure into shale rock formations to stimulate the flow of oil and gas. A majority of the 13,000 wells drilled each year using hydraulic fracturing are on private lands and fall under state regulation, as they have for 60 years.[vi]

A study by Dunham and Associates indicated that it will cost over 20 times the amount estimated by the Bureau of Land Management (BLM) to comply with its new rule. The Dunham and Associates study estimated the cost to meet the proposal for disclosing chemicals being used and certifying the well is isolated to avoid leaks to average $253,839 per well compared to the BLM estimated costs at $11,833 per well.[vii]  (For example, the costs for a deep horizontal oil well in the Bakken formation would be higher than that of a shallower vertical gas well drilled in the San Juan Basin.)[viii] According to the Dunham report, BLM’s estimate did not account for the 72 hours that rigs would be idled to let drillers document for regulators that cement, required by the rule to assure the well’s integrity, has set properly. The cost of maintaining the drilling gear, including rented rigs, while the cement cures is estimated at $140,400 per well. The Dunham study estimates the total costs of the rule between $1.5 billion and $1.62 billion a year.

While other countries are using hydraulic fracturing to increase production and revenues, the United States – which pioneered the technological breakthroughs that led to the practice — is looking to lower oil and gas production and increase costs by increasing regulations on the technology. To date, hydraulic fracturing has helped to reduce our dependence on imported oil and natural gas, lower natural gas and electric utility bills, and increase employment in states where shale oil and natural gas are produced. It looks like hydraulic fracturing should be a win-win relationship for domestic production and consumption of oil and natural gas, but the Obama Administration has proposed changes that threaten that through increased regulations, despite the fact that the states have successfully regulated that industry for half a century or more.

According to Eric Dille, government affairs director for Houston-based EOG, the proposed rule by the BLM will “place undue economic burdens and time delays on independent oil and natural-gas producers that will inevitably drive many smaller companies away from exploring for oil and natural gas on federal lands.”

Another Obama-Funded Company Files for Bankruptcy: A123 Systems