The Energy Information Administration (EIA) is forecasting that gasoline prices will average $2.45 per gallon this summer[i]—the lowest since 2009—and will increase demand for gasoline by 2 percent[ii]—a turnaround from the stagnant demand caused by high oil prices prior to June of last year and increasing fuel efficiency standards mandated by the Obama Administration. The average summer gasoline price is expected to be $1.14 per gallon lower than the average price last summer of $3.59. (See graph below.) Gasoline prices vary among U.S. regions and cities. EIA is projecting average summer gasoline prices for 2015 to range from a low of $2.25 per gallon in the Gulf Coast region, where a large number of oil producing wells and refineries are located, to a high of $2.82 per gallon on the West Coast, where environmental regulations and state and local taxes are high and growing. 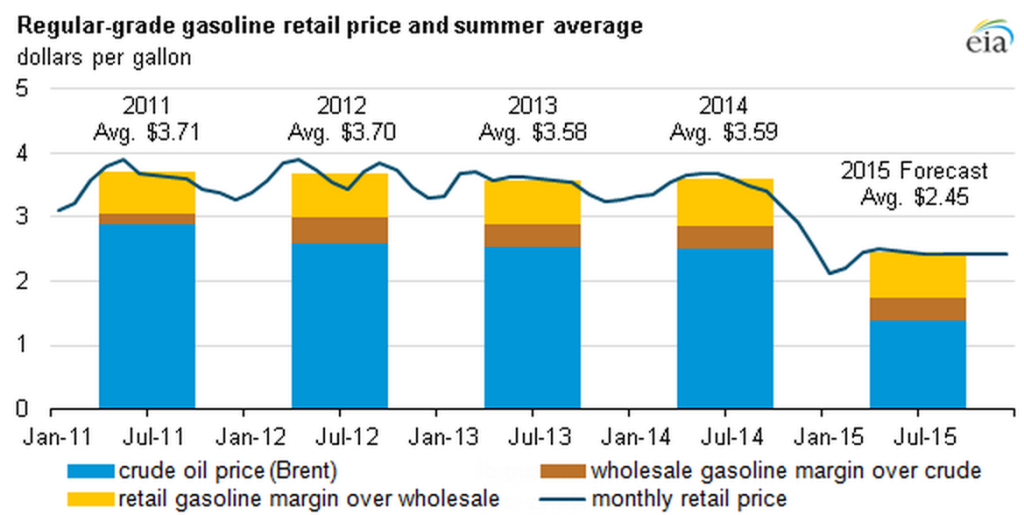 The major reason for the lower gasoline price this summer is the decline in world crude oil prices from last summer—a reduction of 45 percent. The world oil price this summer is expected to average $58 per barrel—down from $106 per barrel from last summer’s average. The decline is a result of an overabundance of supply, mainly due to hydraulic fracturing and horizontal drilling in the United States that increased production in this country by 62 percent since 2009 and weak world oil demand. The oil component of summer gas prices is expected to be $1.38 per gallon—down from $2.52 per gallon last summer.

Gasoline prices also include Federal, state and local taxes; refining costs; and distribution and marketing costs as seen in the graph below. For February 2015, for example, crude oil represented 51 percent of the gasoline price, followed by refining with 23 percent and taxes with 20 percent.

What we pay for in a gallon of: 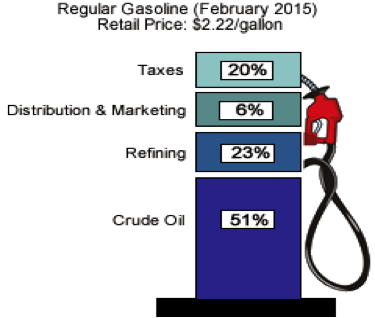 EIA is expecting that world oil prices (Brent) will average $59 in 2015 and $75 in 2016. West Texas Intermediate is expected to be $7 lower than the Brent price this year and $5 lower next year. At those prices, most drilling in the United States is expected to be profitable despite oil producers decommissioning about half their drilling rigs since last year. Some analysts expected oil storage capacity in the United States to reach its limit, forcing prices lower, but U.S. refineries are expected to be producing gasoline and diesel now that they have retooled for the summer season, absorbing a good deal of the stored oil.

However, an agreement with Iran on its nuclear industry and the lifting of sanctions could bring oil prices down by $5 to $15 a barrel in 2016. Iran is expected to have at least 30 million barrels of oil in storage, and the technical ability to increase production by at least 700,000 barrels a day by the end of 2016. The pace of Iran’s return to the global marketplace, however, would be determined by negotiations and Iran’s compliance with the terms of the agreement.[iii]

Because the lower world oil prices are expected to continue throughout this year, EIA expects the U.S. gasoline price to average $2.40 a gallon in 2015. The average American household is expected to spend about $700 less on gasoline this year compared with 2014; and annual vehicle fuel expenditures are expected to fall to their lowest level in 11 years. The revolution in technology and investment in U.S. oil production on non-federal lands has paid off for consumers and the U.S. economy.   We have – contrary to the naysayers – “drilled our way to lower gasoline prices.”[iv]

[i] Energy Information Administration, Summer gasoline prices to be down more than $1 from last summer, April 8, 2015, http://www.eia.gov/todayinenergy/detail.cfm?id=20712

“Peak Oil” Theory May Have Peaked

Forbes Op-Ed: Can The 'Tyranny Of The Status Quo' Be Broken?