Recently T. Boone Pickens appeared on CNBC’s Squawk Box to discuss the virtual endorsement of the “Pickens Plan” that President Obama had given earlier that week. Amidst the repetition of sensible goals such as “developing our own resources” (that the Administration’s policies actually don’t achieve), Pickens made an offhand remark that is quite revealing of the mindset of those who want the federal government to centrally plan America’s energy sector. Pickens made it crystal clear that if the choice is between affordable energy for consumers, versus the development of newfangled technologies, he will vote against the consumers.

Setting the Context: Obama’s State of the Union

The Pickens Plan calls for ending America’s “addiction” to foreign oil through government incentives to encourage energy conservation, a foster a huge increase in electrical generation from wind and solar, and to convert America’s vehicles to run on natural gas. (There are many problems with the Pickens Plan, but in this post we are going to focus just on the mindset behind the man pushing it, and his casual attitude toward energy prices for consumers.)

In his State of the Union address, President Obama—though not mentioning Pickens by name—clearly endorsed a compatible energy policy:

But with only 2 percent of the world’s oil reserves, oil isn’t enough. This country needs an all-out, all-of-the-above strategy that develops every available source of American energy. (Applause.)

A strategy that’s cleaner, cheaper, and full of new jobs. We have a supply of natural gas that can last America nearly 100 years. (Applause.)

…The development of natural gas will create jobs and power trucks and factories that are cleaner and cheaper, proving that we don’t have to choose between our environment and our economy. (Applause.)

Now, what’s true for natural gas is just as true for clean energy. In three years, our partnership with the private sector has already positioned America to be the world’s leading manufacturer of high-tech batteries. Because of federal investments, renewable energy use has nearly doubled, and thousands of Americans have jobs because of it.

I will not cede the wind or solar or battery industry to China or Germany because we refuse to make the same commitment here. We’ve subsidized oil companies for a century. That’s long enough. (Applause.)

Later on, in remarks at an Air Force base in Colorado, Obama continued to push for more use of natural gas to help America make the ultimate transition to “clean” energy such as wind and solar.

Putting aside the absurdity of Obama’s proposals—for example raising taxes on efficient energies in order to subsidize inefficient ones, all in the name of economic growth and job creation—it’s easy to see why T. Boone Pickens feels that he’s finally getting some respect from important people. Now that we’ve set the stage, we can explore the implications of Pickens’ views on energy prices.

In the beginning of the Squawk Box interview, co-anchor Becky Quick explained to the viewers that Pickens had been vindicated by the president’s proposals to effectively implement the Pickens Plan, three and a half years after the Texas oil man first announced it. Pickens modestly accepted these accolades, and spoke matter-of-factly of the trucking fleet’s transition to natural gas, because it was currently cheaper than diesel. But then Ms. Quick raised some concerns about natural gas prices rising and upsetting this trend. Pickens’ response is quite revealing. Here’s the relevant exchange (with Quick’s slip of the tongue edited out of the transcript for brevity), starting around 1:30 in the interview:

T. Boone Pickens: Well they probably will come back higher Becky, but my gosh, the parity oil-to-gas is 6-1, it’s now 40-1. So you have plenty of room to come back, go up. See if you move back up to $6 on natural gas, you can start to do wind again.

To understand the significance of Pickens’ nonchalant remarks, note that he is casually discussing practically a doubling of natural gas prices from current levels: 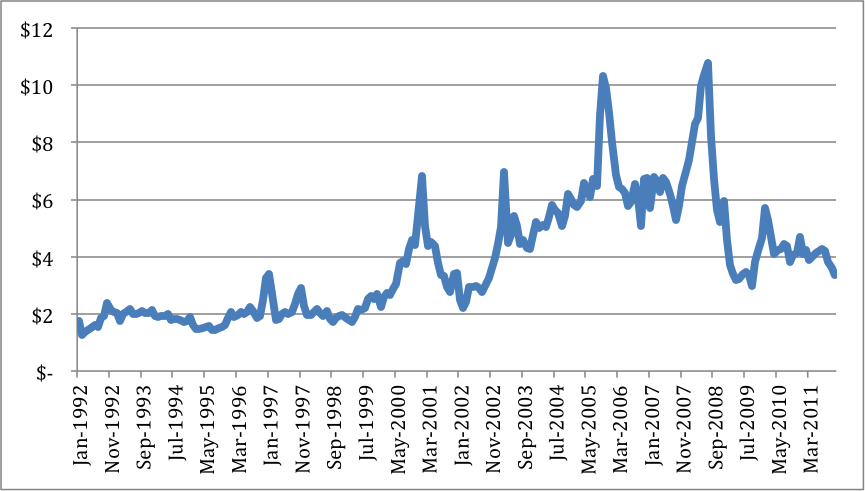 T. Boone Pickens is personally not afraid of such a massive jump in natural gas prices, since the country could then “start to do wind again.” But in reality, a roughly $3 increase in natural gas prices would be devastating to the U.S. economy, particularly in its current condition.

According to the EIA’s most recent data [.pdf], as of November the US in the previous 12 months had consumed 24.6 trillion cubic feet of natural gas. Using back-of-the-envelope calculations, we can see that a $3 increase in prices (per thousand cubic feet) would raise energy expenses by about $74 billion for consumers and businesses, with the major components as follows:

The above numbers come from simply multiplying the latest 12-month consumption patterns of natural gas, by the hypothetical increase in prices that T. Boone Pickens discussed in his CNBC interview. In reality, with rising prices households and businesses might switch to other fuels and thus mitigate the blow. Furthermore, economists know very well that we can’t naively assume that the ultimate burden of a price hike will fall on the immediate party in question. For example, electric utilities using natural gas would surely pass on a big spike in operating costs to their customers in the form of rate increases.

Despite these caveats, it is clear that natural gas prices of $6 would severely constrain the nation’s consumers of the fuel, whether households or businesses. However, Pickens needn’t worry about the overall economic blow coming from the transportation sector: In November 2011, only 0.13% of the nation’s natural gas consumption came from vehicles running on the fuel. This fact shows just how far the market currently is from Boone’s vision for the future.

If a particular energy price, whether for a barrel of crude oil or a cubic foot of natural gas, is a true free market price, then it is neither good nor bad. It is simply information that expresses the underlying conditions of available supply, technological know-how, and consumer demand.

In his CNBC interview, T. Boone Pickens acts as if he is a disinterested observer, predicting the inevitable development of the energy sector following market forces. Yet this isn’t true at all. Pickens for years has been telling the government to use its powers to change the market outcome, in favor of natural gas, wind, and solar power—and lately the Obama Administration seems to be heeding his advice.

Market forces will steer the energy sector in the efficient direction that best satisfies consumers. If it truly makes sense to convert the trucking fleet to run on natural gas, then price signals will lead—as if by an Invisible Hand—the owners of shipping companies to do just that. Yet Pickens, Obama, and other interventionists don’t want to rely on the decentralized market process. Instead they want to use the quite visible and heavy hand of the federal government to pick energy winners and losers, and to raise prices for consumers in the process.