Canada is our most trusted ally and neighbor to the north. And yet, when it comes to energy independence, we question whether we should build an oil pipeline from there that would carry additional oil imports into the United States that could make us independent of overseas crude oil. Yet, we seem to have no qualms about purchasing crude from oil producing countries where citizens are centuries behind in energy availability and prosperity.

Take Nigeria, for example, from which we average oil imports of 459 thousand barrels per day[i], ranking seventh in U.S. oil imports. The Niger Delta contains massive oil deposits, generating the Nigerian government about $600 billion since the 1960s. However, the majority of the Niger Delta’s population lives in poverty, without access to clean water or health care.[ii] Despite the wealth generated by the oil boom, the poverty of the people is clearly an example of the “resource curse,” with more than 60 percent of its people depending on the natural environment for their livelihood. According to the Energy Information Administration, more than 80 percent of Nigeria’s energy consumption comes from burning wood or other biomass.[iii]

U.S. Energy Independence Can Be Accomplished

In 2012, U.S. oil production reached its highest output since 1991, mostly due to increased production on private and state lands due to hydraulic fracturing technology. Just 5 years ago, the United States was importing almost 60 percent of its oil needs, while today, we import only 40 percent with less than a fifth of our imports coming from outside the western hemisphere.[v] We import almost 3 million barrels per day from Canada, the most oil imported from a single country. Canada’s oil reserves are estimated at 175 billion barrels—the third largest in the world.

The Keystone pipeline will enable more oil imports to come from Canada and reach refineries on the Gulf coast of Texas, which is critical for North America to reach energy independence. Gulf Coast refiners will then be able to substitute crude from our reliable northern neighbor for unreliable Venezuelan crude, both of which are heavy crudes.

For four years, the Obama administration has been trying to decide if the Keystone XL pipeline is in the “national interest.” If approved, it will run from the Alberta oil sands fields to Gulf Coast oil refineries. The southern portion of the pipeline is already under construction between Oklahoma and the Texas Gulf, employing 4,000 workers. It will carry 700,000 barrels of oil per day when completed later this year.[vi] The 1,700-mile route of the northern portion was initially turned down by the administration because it would cross environmentally sensitive areas in Nebraska. The revised route has been approved by the governor of Nebraska, Dave Heineman[vii], and is awaiting the administration’s approval, which is expected to be decided around the beginning of April. The pipeline has been under consideration for years and would already be operating if it were not for the delays from the State Department.

Parts of the government (the Environmental Protection Agency and the Pipeline and Hazardous Materials Safety Administration) reviewed the plan and voiced no public opposition.[viii] The State Department just issued a 2,000-page revised environmental impact statement that provides no environmental reason against the pipeline.  While the impact statement states that extracting, shipping, refining and burning oil from oil sands produces more greenhouse gases than most conventional oil (5 to 19 percent more), the study agrees that Canada will continue to develop its oil sands even if the Keystone XL pipeline is not built.[ix]

Job estimates related to the pipeline have varied from 6,000 to 20,000. TransCanada, the company building the proposed pipeline, estimates the Keystone XL project will support 9,000 U.S. jobs through early 2015. Regardless of the exact number, the pipeline will bring billions of dollars in economic activity and tax revenues to the U.S. economy.[x] 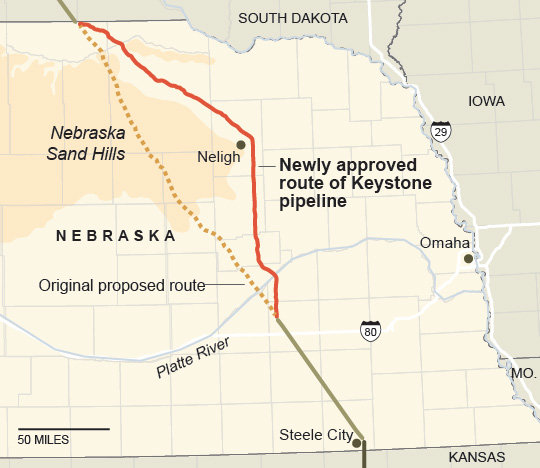 Canada has invested more than $100 billion in oil sands development over the last 10 years, which has generated 75,000 jobs that is expected to multiply over the next 25 years as production increases. The Canadian Association of Petroleum Producers estimates that the country’s oil production will almost double by 2030, from 3.2 million barrels of oil a day today to 6.2 million barrels a day by 2030, with oil sands representing most of the increase.[xi]

Currently, nearly all of the country’s oil is exported to the United States. It is expected that more Canadian oil will reach U.S. markets even if the Keystone project is not approved through a combination of rail, barge, truck and pipelines. For example, tank car orders to move crude petroleum by rail is rising with as many as 30,000 new cars to be available by the end of 2014—enough capacity to move 2 million barrels of oil per day. About 40 percent of those orders were made by Canadian entities that are anxious to move their oil.[xii]  The shortage of pipeline capacity has produced localized supply gluts, forcing the price of Canadian crude to fall well below American and international benchmarks.

The Canadians are growing exasperated with our delays and will eventually turn to other economies to sell the oil to if the United States does not allow sufficient infrastructure to bring it to U.S. markets. Thus, while environmentalists worry about the slightly additional carbon dioxide emissions that it takes to produce oil sands over conventional crude oil (5 to 15 percent from well to wheel), that oil will be produced and consumed somewhere, most likely China.  And, if Canada sends its oil by pipeline, train, and tanker to Asia, more carbon dioxide emissions will be generated by transporting it there than transporting it to the United States.

In view of political unrest and uncertainty in the Middle East and terrorist attacks against oil and gas facilities in northwest Africa, the prospect of North American energy independence should be embraced by all. By approving the Keystone XL pipeline along with other policies to encourage oil and gas development in the United States, the administration could accelerate the timeline for North American energy independence while simultaneously stimulating the economy.  Further, it would be beneficial to have our oil supplies come increasingly from responsibly managed sources rather than countries where oil wealth benefits few and the costs of extraction are borne by many.

BREAKING NEWS: Is the EPA Coordinating With Hollywood?