The shale oil and shale gas revolution is coming to Colorado, which already ranks tenth among the states in oil production.[i] Thanks to new shale production in the Wattenberg Field, the Centennial State could almost triple its output and climb to fifth among the states, right behind North Dakota. And with that increase in oil production would be the additional benefits of more jobs, more state revenues, more housing demand, and economic prosperity to the citizens of Colorado. 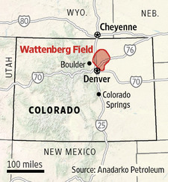 New oil finds in Colorado should produce about $50 million per year in severance taxes to state and local governments, with more revenues being generated through property and sales taxes.  New drilling jobs would be generated through 2012, and for each drilling job, an estimated 3.3 jobs in related industries such as pipeline construction and trucking would be created.  And these are not low-paying jobs either.  In fact, oil and gas jobs in Colorado pay an average of $103,000, including benefits.[ii]

Shale discoveries on non-federal lands are beginning to fundamentally transform America’s energy outlook in ways thought inconceivable just a few short years ago.  In Colorado, these oil and natural gas resources are locked in a shale formation called the Niobrara, which is a 90-million-year-old oil bed that has become economic due to hydraulic fracturing and horizontal drilling technology.[iii]  Some experts predict that the Niobrara shale could have greater potential than the Eagle Ford Shale in Texas, where drilling is rapidly expanding.  The potential  exists for Niobrara to mirror the Bakken Shale in North Dakota as a major oil field.

That level of production has caught the eye of other oil companies (e.g. Conoco Philips) that are now obtaining lease holdings in the Niobrara with hopes to gain some of the benefits that Anadarko has found. In the end, crude production in the Niobrara could increase to about 286,000 barrels a day by 2020, according to The Western Energy Alliance.[vii]

Technology and American ingenuity have again found energy that is economic in today’s markets, providing good-paying jobs and more government revenues in the meantime. American energy resources are vast, but U.S. companies need access to them. Studies have shown that the United States could be almost free of overseas oil if the U.S. government would re-open development on federal lands and waters and allow greater access to Canadian resources.[viii]  Why should we pour millions into green energy when American entrepreneurship can provide domestic resources that are secure, abundant, and economic?