On Monday, March 3, the Environmental Protection Agency (EPA) announced its Tier 3 regulations requiring U.S. refineries to further reduce their sulfur emissions from 30 parts per million to 10 parts per million beginning in 2017. EPA claims that to further reduce sulfur emissions would only increase gasoline prices by a fraction of a cent, but gasoline prices in the real world and the refinery industry refutes that claim. EPA says this plan follows California—and California has the highest gasoline prices in the continental U.S.  The refining industry explains that gasoline prices could go up by as much as 9 cents per gallon because the regulation will cost the industry $10 billion[i] in equipment costs and $2.4 billion in annual compliance costs.[ii]

About a decade ago, U.S. refineries reduced the sulfur contained in gasoline by 90 percent from 300 parts per million of sulfur to the current 30 parts per million under EPA’s Tier 2 program, and environmental benefits are continuing to occur as the U.S. vehicle fleet continues to turn over. Removing the first 90 percent of sulfur from gasoline is done fairly easily but removing the last 10 percent of the sulfur is much harder, costing the industry $10 billion due to the expensive and energy-intensive equipment that is required. That equipment will actually produce more carbon dioxide emissions than the tailpipe emissions would save and will increase gasoline manufacturing costs by between six and nine cents per gallon, according to an analysis by Baker and O’Brien.

The Jan. 1, 2017, compliance date for the Tier 3 rule gives most refiners less than three years to engineer and deploy the expensive renovations. The refinery industry, which is faced with a shortage of skilled labor and other regulations that would contribute to the renovations, is finding the schedule tight, which will only increase the costs of compliance.

According to EPA, some concessions are embedded in the program. EPA is working on flexibility provisions for small refiners. And, refiners can earn credits for early compliance — or purchase credits to buy time when credits are available through the averaging, banking, and trading program. Refiners can also carry over credits from the Tier 2 trading program if they have them.[iii]

The auto industry does not oppose the rule, even though it is estimated that the rule will cost automakers about $15 billion over 10 years, adding about $72 to the price of a new vehicle by 2025.[iv] The auto industry’s reasoning to not oppose the Tier 3 rule is that complying with the new gasoline regulation will help the auto industry more easily meet the Obama administration regulations on tightening vehicle fuel economy standards.  Also, automakers would rather have standards that require more effort and expense on behalf of the fuel makers, rather than assume the entire burden of cleaner onboard technologies which would drive up their costs. Furthermore, even though the federal government finally sold their last shares of GM stock in December, the federal government exerts a lot of control over the car makers. After the auto bailouts, the car makers understand that they can get bailed out if they don’t complain too much.

In pitching this new regulation to reporters, EPA Gina McCarthy stressed how this rule follows California. “This isn’t an innovative new concept,” McCarthy told reporters. “This gasoline is already in use in California and in other countries.” That may be true, but what about the price of gasoline in California compared to the rest of the country. Here’s GasBuddy.com’s heat map of gasoline prices: 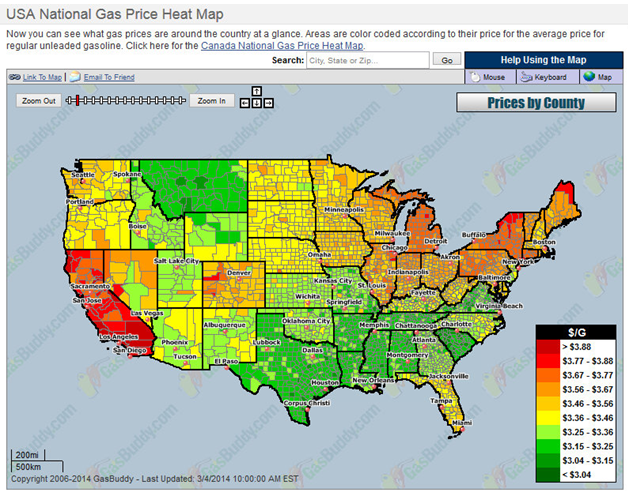 So yes, by following California, the U.S. is headed for higher gasoline prices.

Here again, EPA is forcing American industry to meet an onerous standard when that industry has already reduced sulfur from gasoline by 90 percent. To further reduce it by another 60 percent will cost consumers 6 to 9 cents per gallon—much more than EPA’s estimate of less than a penny.  This is aggravated by the tight deadline, which means that essentially all refineries will be demanding the same services from a limited pool of providers who engineer and install mandated equipment, and refineries will necessary go through downtimes while the equipment is being installed.

According to the American Petroleum Institute’s Downstream Group Director Bob Greco, “Besides the enormous costs and negligible environmental benefit, we are also concerned about the timeline of EPA’s new rule. The rushed timeframe leaves little opportunity for refiners to design, engineer, permit, construct, start up and integrate the new machinery required. This accelerated implementation only adds costs and potentially limits our industry’s ability to supply gasoline to consumers.”[v]

“This rule’s biggest impact is to increase the cost of delivering energy to Americans, making it a threat to consumers, jobs, and the economy. But it will provide negligible, if any, environmental benefits. In fact, air quality would continue to improve with the existing standard and without additional costs.”[vi]

In an economy where consumers are struggling, increasing the costs of their transportation through a variety of new regulations imposed from Washington risks scuttling economic growth.  Those who spend more money on their essential transportation because the government forces it upon them have less to spend on other goods and services, making America poorer.