As the price of oil continues to fall, it is worth pointing out the tremendous influence that U.S. production—and hence, U.S. government policy—has had on this trend. For decades, Americans have been beaten over the head with the mantra that we live in an energy-starved country,[1] where the only hope for the future is to promote energy conservation and renewable sources. Yet the boom in shale production shows just how pessimistic such a view can be. Furthermore, there are still vast reservoirs of conventional energy lying trapped on federal land by government policy.

To prove that I’m not attacking a straw man, consider the remarks of Nobel laureate Paul Krugman, writing in the New York Times four years ago:

Oil is back above $90 a barrel. Copper and cotton have hit record highs. Wheat and corn prices are way up. Over all, world commodity prices have risen by a quarter in the past six months.

So what’s the meaning of this surge?

Is it speculation run amok? Is it the result of excessive money creation, a harbinger of runaway inflation just around the corner? No and no.

What the commodity markets are telling us is that we’re living in a finite world, in which the rapid growth of emerging economies is placing pressure on limited supplies of raw materials, pushing up their prices. And America is, for the most part, just a bystander in this story. [Bold added.]

In a previous post, I walked through the theory and evidence showing that—contrary to Krugman’s confident assertion above—the Federal Reserve did have something to do with rising oil prices, through its direct effect on commodity prices and indirectly by weakening the dollar.

Focus on the Supply Side

However, besides the role that the U.S. central bank has played in commodity prices, we must also look at the supply of oil. Here too, Krugman’s remarks quoted above are simply laughable. Look at the chart of U.S. production, where we’ve placed a red triangle when Krugman announced America was “just a bystander” in the story of high oil prices: 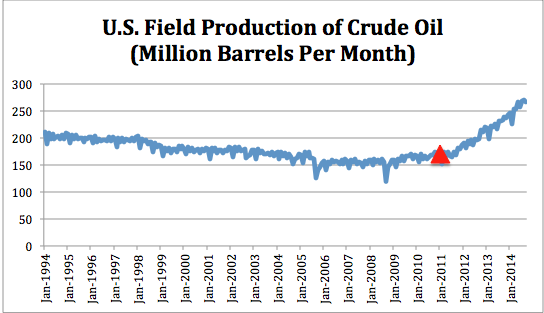 U.S. field production of crude oil is up more than 50 percent since Krugman assured his readers in late 2010 that the U.S. could do nothing about rising global oil prices.

There are many factors going into the price of a globally traded commodity like crude oil. Previous IER articles have detailed the increase in U.S. production relative to global demand, and (to repeat) I have previously looked at the role of the Federal Reserve’s end of “quantitative easing” and how that could have driven the plunge in prices since the summer.

However, I recently became aware of an article that financial analyst Tom Landstreet wrote for Forbes back in August. Landstreet was pointing to the Bureau of Ocean Energy Management’s announcement on July 18, 2014. In the words of the BOEM, it had issued a “Record of Decision (ROD)” that would set “a path forward for appropriate geological and geophysical (G&G) survey activities off the Mid- and South Atlantic coast to update 40-year old data on the region’s offshore resources.”

Landstreet argued that this announcement (plus developments in Mexico) would put downward pressure on oil prices as speculators anticipated a loosening of policy in the future. This was only strengthened by the election results.

In hindsight, the data certainly seem to bolster his theory. In the chart of oil prices below, I’ve placed an arrow marking the price of oil on the date of the BOEM announcement: 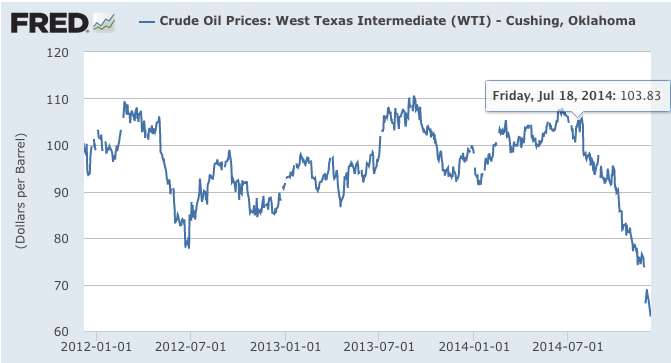 Of course we can never know for sure what would have happened in the absence of the announcement, but it certainly seems prima facie that it sparked the massive slide this year.

Many people are wondering whether U.S. production can keep up the pace if crude prices fall below the “breakeven point” of several major shale operations. However, the only reason American firms are so heavily tapping into higher-cost extraction sites is that the federal government is keeping some of the most lucrative land off-limits to exploration, let alone drilling. Even if world crude prices continue to fall, the United States could maintain its enhanced level of oil output, if only the government would get out of the way.

[1] As recently as 2012, President Obama said, “As a country that has 2 percent of the world’s oil reserves, but uses 20 percent of the world’s oil — I’m going to repeat that — we’ve got 2 percent of the world oil reserves; we use 20 percent.  What that means is, as much as we’re doing to increase oil production, we’re not going to be able to just drill our way out of the problem of high gas prices.  Anybody who tells you otherwise either doesn’t know what they’re talking about or they aren’t telling you the truth” (bold added).  Speech in North Carolina, March 7, 2012.

In Lima, Leaders Should Focus on Lifting the Poor Out of Poverty

Prices Are Dropping, But Gas Is Still Historically Expensive