U.S. Secretary of State John Kerry joined world leaders on December 11 for a United Nations climate change conference in Lima, Peru. The conference is intended to serve as precursor for a December 2015 conference in Paris, where leaders may sign an international agreement on carbon dioxide (CO2) emissions reductions.

In her opening remarks, Christiana Figueres, executive secretary of the UN Framework Convention on Climate Change, articulated the goals of the conference: “History, dear friends, will judge us not only for how many tonnes of greenhouse gases we were able to reduce, but also by whether we were able to protect the most vulnerable, to alleviate poverty and to create a future with prosperity for all.”

We agree that world leaders should focus on protecting vulnerable populations from climate-related deaths and on alleviating poverty. The best way to accomplish these goals is by expanding access to reliable and affordable energy, specifically, natural gas, oil, coal, hydro, and nuclear.

As I have pointed out before, energy consumption and electricity generation (primarily from natural gas, coal, nuclear power, and oil) have been tied to better lives for people around the world. In China, India, and Brazil, higher energy and electricity use have been associated with higher economic growth, lower child mortality rates, longer life expectancies, and better access to sanitation facilities. According to data from the World Bank, in India, Brazil, and the U.S., the results have also included lower air (PM10) pollution.

It is not difficult to understand why reliable energy is so vital to helping people enjoy better lives. As researchers at the Global Energy Network Institute explain, electricity is vital for social and economic development because it is necessary for everything from refrigerating food and medicines to providing light, heat, air conditioning, and pumping water.

In Peru, the host country of the conference, a story similar to that of China, India, and Brazil has unfolded over the last 20 years. According to World Bank and BP Statistical Review 2014 data, increases in energy consumption and electricity generation have occurred alongside rising life expectancy, GDP per capita, and access to improved sanitation facilities, while PM10 pollution and the child mortality rate have dropped off: 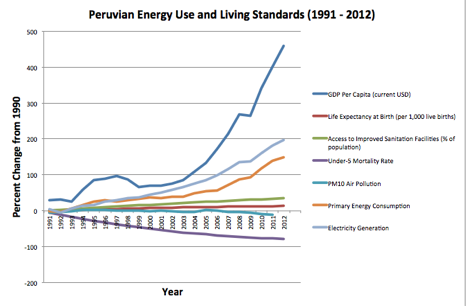 Figueres also called on world leaders to pursue “ambitious actions on climate change” to create “opportunity instead of propagating poverty.” Reliable energy holds the key to safeguarding the poor against climate change.

The only way developing countries can effectively deal with projected climate change impacts is to develop infrastructure using energy-intensive processes—currently, the vast majority of that energy comes from natural gas, oil, coal, hdyro, and nuclear. As energy expert Alex Epstein notes, we do not take a safe climate and make it dangerous; we take a dangerous climate and make it safe. Energy-intensive projects that build safe infrastructure have decreased the number of climate-related deaths over time:[1] 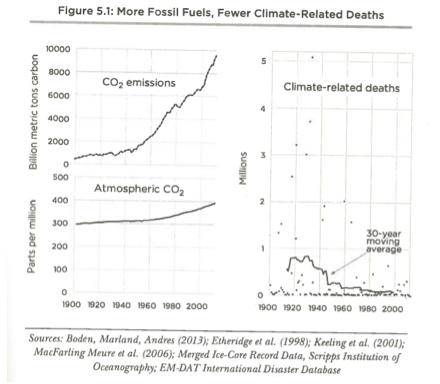 Why have climate-related deaths fallen, even as CO2 emissions have increased? Epstein explains:

Climate is no longer a major cause of death, thanks in large part to fossil fuels…Cheap, plentiful, reliable energy from fossil fuels amplifies our ability to build an infrastructure that insulates us from nature’s climate dangers and discomforts…if we care about climate livability, energy and technology have to be the focus.[2]

Vulnerable populations do not need to remain that way. If they are allowed to develop the kinds of infrastructure that keep people in developed countries safe, then they will not be poor and vulnerable. That development depends on access to reliable energy sources.

Instead of getting caught up in “how many tonnes of greenhouse gases we were able to reduce,” world leaders should focus on alleviating poverty. History demonstrates that using more rather than less reliable energy and electricity has pulled billions of people around the world out of squalid living conditions, giving them a chance to lead better lives.

In 1900, Americans could hardly have dreamed that their counterparts in the year 2000 would travel from New York City to Los Angeles in just five hours, communicate instantly with their friends and relatives around the world, expect to live until 80 and above (life expectancy was 48 years in 1900), or save premature children from dying by using incubators. These things and so much more came about because we expanded access to reliable energy. We owe it to developing countries to let them marvel at their own similar progressions over the next century.

U.S. Oil and Nat Gas Reserves Up in 2013 Due to Hydraulic Fracturing