China leads the world in shale gas resources according to the Energy Information Administration, but the United States leads the world in shale gas production, with the world’s second largest resources of shale gas.[i] The reasons for the slow development abroad are several: a lack of knowledge concerning the geology of shale formations, lack of infrastructure to drill and transport the fuel, government ownership of the mineral rights with the associated red tape, and for some, environmental concerns. In the United States, the shale gas boom has brought back industries that have gone abroad for cheaper energy and the shale oil boom has created an economic boost for states like North Dakota, now the second largest oil producing state in the United States. The shale boom in the United States is due to a unique combination of private ownership of mineral rights, interest of small oil and gas developers, and availability of geologic data.[ii] 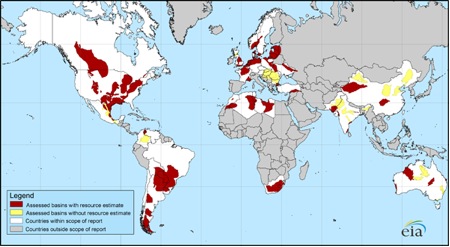 The use of a combination of hydraulic fracturing and horizontal drilling has enabled producers to extract oil and gas from shale formations. While application of hydraulic fracturing to produce oil and gas began in the 1950s, the development of technologies for its commercial production did not start until the mid-1970s when a partnership developed among private companies, the U.S. Department of Energy (DOE) and the Gas Research Institute (GRI).  In the 1980s and 1990s, Mitchell Energy and Development Corporation experimented in the Barnett Shale in North-Central Texas, making shale gas production a commercial reality there. After this success, other companies started producing in the Barnett and by 2005, the Barnett Shale formation was producing almost half a trillion cubic feet of natural gas a year. Other shale gas plays such as Fayetteville Shale in North Arkansas; Haynesville in southwestern Arkansas, northwest Louisiana, and east Texas; Marcellus in Pennsylvania and surrounding states; Woodford in Oklahoma; and Eagle Ford in Texas were developed.

The growth of shale oil and gas production in the United States was essentially due to small, independent companies that were willing to take large financial risks, and landowners who owned their mineral rights and were ready to lease their lands for a share of the profits. The shale industry in the United States also benefited from a large existing pipeline network to transport the fuels, the availability of drilling rigs, and geologic information available from state regulators. 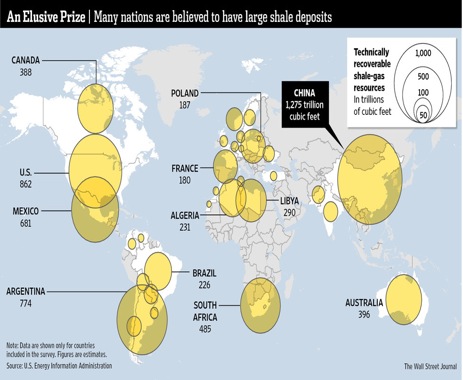 China. China’s shale oil and gas resources are located in arid and/or heavily populated areas. Hydraulic fracturing uses mainly water with some chemicals to break the shale rock and thus lack of readily available water causes concern for producers, who have to invest heavily in the exploration phase of well development.  Work is ongoing to overcome these problems.

Argentina. Argentina recently nationalized the assets of a Spanish company that was its major oil and gas producer. That company discovered a large shale deposit in Argentina estimated to contain about one billion barrels of oil. The take-over, however, severely reduced interest in other companies’ investing in oil and gas production in Argentina. Also Argentina has rules that make it difficult to import needed technology and export profits. An American company, Apache Corp., holds the rights to drill in 450,000 acres of Argentine shale, but is not willing to do so because it can cost twice as much to drill a well there compared to the United States and two to four times as much to hydraulically fracture the well.

Poland. Industry interest in Poland has diminished due to lower than expected amounts of gas being produced from the first few wells drilled, changes to the country’s tax and royalty rules, slow issuance of drilling permits, and skepticism from local residents.  Further at issue is who owns the mineral rights. For example, a resident who sold land where a well was being drilled is being told that the government owns the mineral rights beneath the land. According to Deputy Environment Minister Piotr Wozniak, “Investors are right to complain, since our civil service hasn’t yet adjusted to the emergence of this sector.”  So far, ExxonMobil drilled two wells in Poland, finding insufficient oil and gas to continue, but Chevron is still interested in developing its drilling rights there.

The success of the shale oil and gas industry in the United States is primarily due to the private ownership of much of the oil and gas mineral rights and the entrepreneurship of small, independent companies, who succeeded in developing the technology. In some countries, people are concerned about possible environmental issues. Because hydraulic fracturing has mostly occurred on private lands in the United States with decades of experience behind it, landowners have incentives to balance environmental concerns with income from energy production. This has helped lead to a good environmental track record for hydraulic fracturing in the United States for there has not been a single confirmed case of groundwater contamination.

Much of the mineral rights abroad are owned by governments, who are slow at adapting to the emergence of this new sector and dealing with concerns from residents. Also, outside of the United States, little geologic information exists regarding the shale deposits except for their location. Thus, whether the deposits are amenable to hydraulic fracturing technology is generally not known, making it difficult for companies to make the large investments required.  The United States is uniquely set up to encourage such development, which has made us the largest natural gas producer in the world and likely to become the largest oil producer within the next 5 years, according to the International Energy Agency.  The jobs created along with the economic growth can assist the U.S. economy as long as government policies do not change to discourage such growth.