The Energy Information Administration released its Annual Energy Outlook 2013 reference case forecast this week, extending its forecast period to the year 2040.[i] The trends compared to last year’s forecast show greater oil and natural gas production, and slightly lower liquid fuels and coal consumption. Like today, fossil fuels dominate energy markets in 2040 but with a slightly lower share, a 78 percent share compared to 82 percent in 2011. Coal and petroleum lose share in 2040 compared to 2011, while natural gas and renewable energy gain share. (See chart below.) 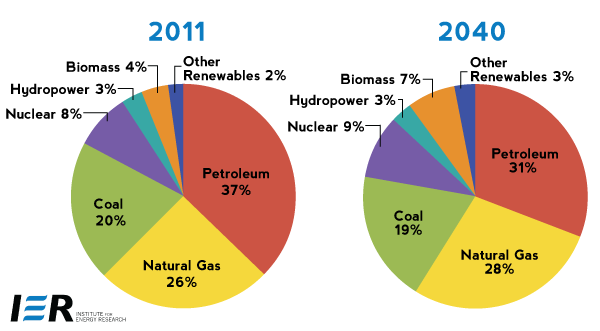 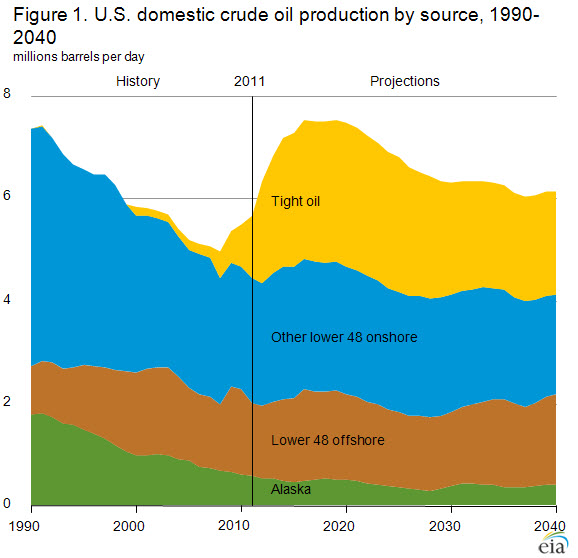 Primarily due to increased oil production, U.S. dependence on imported petroleum declines. U.S. net petroleum imports decline to 34 percent in 2019 from 45 percent in 2011. But, they increase to 37 percent by 2040 due to the lower domestic oil production after 2020. Helping the net petroleum import picture is lower demand as a result of Corporate Average Fuel Economy (CAFE) standards for new light duty vehicles which reach 47.3 miles per gallon by 2025. The new CAFE standards increase the cost of automobiles and result in millions of drivers not being able to purchase a new vehicle.

While total liquid fuels consumption falls, consumption of domestically produced biofuels increases   from 1.3 quadrillion Btu in 2011 to 2.1 quadrillion Btu in 2040, and its share of the U.S. liquid fuels market increases from 3.5 percent in 2011 to 5.8 percent in 2040. Compared to last year’s forecast, however, biofuels are much lower due to less flex fuel vehicle demand, a smaller motor gasoline pool for blending ethanol, and lower production of cellulosic biofuels. Cellulosic biofuels are still not commercially available and cannot meet their targets set by the Energy Independence and Security Act of 2007; their production tax credit is scheduled to expire at the end of 2012 and is not incorporated in the forecast. Despite the CAFE mandate, future sales of battery-powered electric vehicles are 65 percent lower than last year’s projections due to their low sales volume, high costs, and continued problems, particularly with batteries. 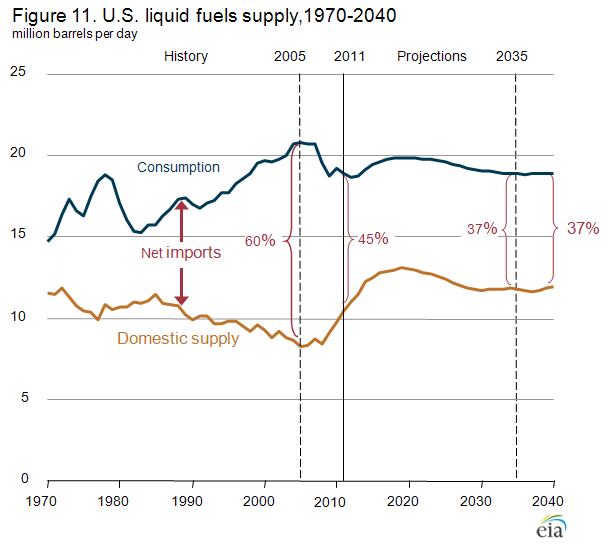 Domestic natural gas use is projected to increase by over 5 trillion cubic feet between 2011 and 2040, primarily in the electric generation and industrial sectors. The strong growth in shale gas production spurs industrial production growth due to relatively low natural gas prices, which lower the costs of both raw materials and energy, particularly through 2025. Industrial natural gas demand increases to 8.45 quadrillion Btu in 2040, from 6.9 quadrillion Btu in 2011. Most of the increase in industrial energy demand is the result of higher output in the manufacturing sector. The advent of shale gas and low natural gas prices increase natural gas’ share of electricity generation from 25 percent in 2011 to 30 percent in 2040. 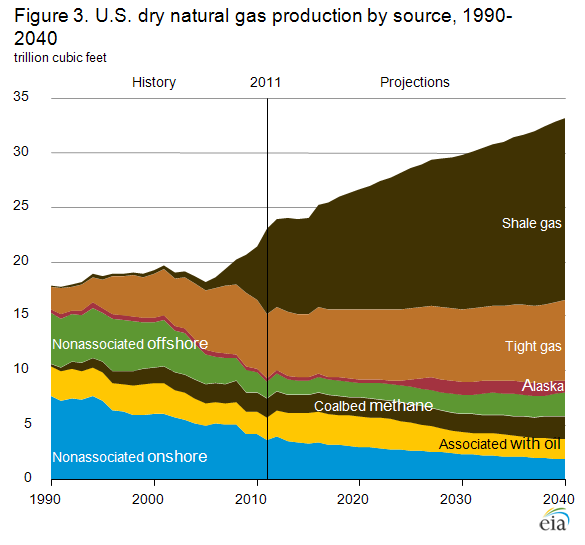 The United States becomes a net exporter of LNG beginning in 2016, and an overall net exporter of natural gas in 2020. Exports of LNG from new liquefaction capacity in the Gulf Coast and Alaska begin in 2016 at a level of 0.6 billion cubic feet per day and increase to 4.5 billion cubic feet per day in 2027 due to increased use of LNG in markets outside North America, strong domestic production, and low U.S. natural gas prices relative to other global markets.

While coal remains the leading fuel for U.S. electricity generation, its share of total generation falls from 42 percent in 2011 to 35 percent in 2040.  Coal’s outlook is dampened by concerns about greenhouse gas emissions, low projected fuel prices for new natural gas-fired plants, slow growth in electricity demand, programs encouraging and mandating renewable fuel use, and the implementation of new environmental regulations from the Environmental Protection Agency (e.g. Mercury and Air Toxics Standards and others).  Primarily as a result of the later, coal-fired capacity is projected to fall from 318 gigawatts in 2011 to 278 gigawatts in 2040. 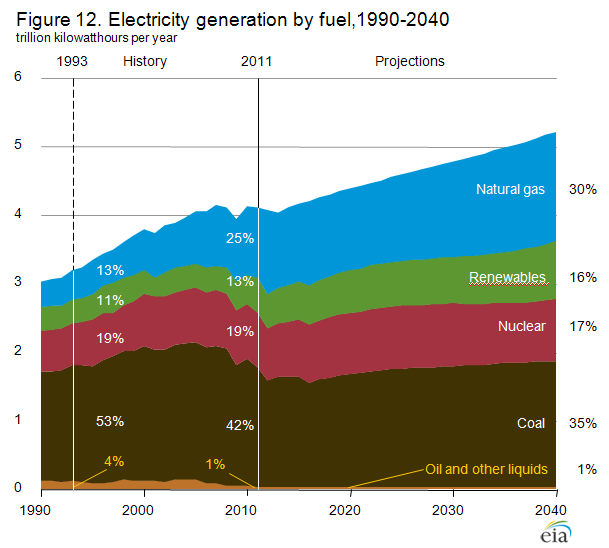 The share of U.S. electricity generation from renewable fuels (including conventional hydropower) increases from 13 percent in 2011 to 16 percent in 2040 due to federal tax credits, state-level policies, and federal requirements to use more biomass-based transportation fuels, some of which can produce electricity as a byproduct of their production process. Annual Energy Outlook 2013 updated the capital costs for new generating technologies and resulted in significant initial cost reductions for wind (13 percent) and solar photovoltaic (22 percent) compared to last year’s capital costs. As a result, solar’s capacity increases by 45 gigawatts between 2011 and 2040 with it being fairly equally distributed between central station utilities and the building and industrial sectors, and wind’s capacity on shore increases by 42 gigawatts. There is no wind offshore being built in the forecast.