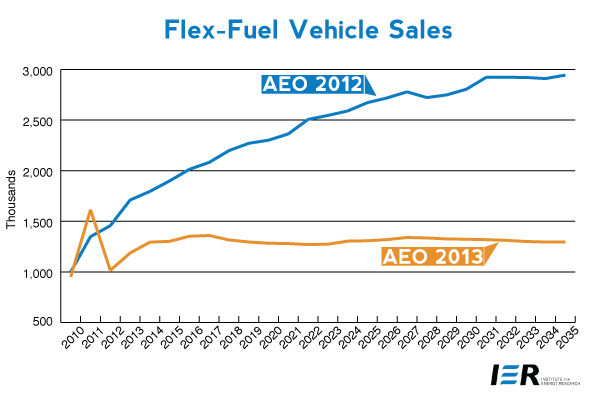 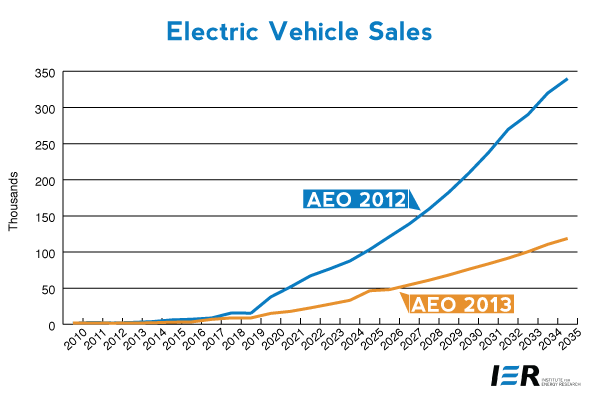 In the 2040 forecast of the Annual Energy Outlook 2013, less than one percent of all cars sales are all-electric and less than 6 percent of the alternative-fuel vehicle sales are all electric. That’s up from the 2011 market share of less than one-tenth of one percent of the total market with slightly more than 17,000 electric vehicles sold in 2011. Sales of all electric vehicles are limited by continued fuel economy improvement in other vehicle types as well as its unfavorable attributes in terms of vehicle range, trunk space, and cost, particularly regarding batteries. 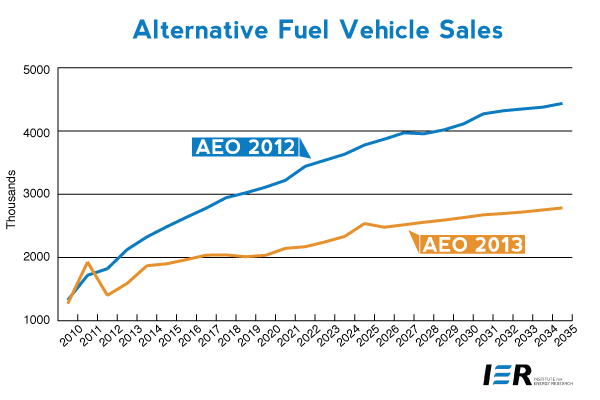 It is not surprising that the public isn’t clamoring for electric vehicles for the reasons mentioned above. An example of the problems can be seen in Fisker Automotive’s Karma sedan —an electric vehicle costing over $100,000. Consumer Reports recently rated it as the worst luxury sedan and the fourth worst sedan over-all. The Karma broke down at the test facilities before Consumer Reports could even take it for a ride. As Consumer Reports explains:

“With the Karma, much attention has been paid to our unfortunately routine problems, including an early failure on our track that left the car immobile and led to the battery being replaced, frequent instrument, window and radio glitches, and recurring warning lights. So far our Karma has made multiple trips back to the dealer (who, by the way, has provided excellent service, flat-bedding the car to and from our facility).”

Fisker was subsidized $193 million by American tax payers even though it manufactures its cars in Finland.  The Department of Energy loan was originally set at $529 million and was to create 2,000 permanent jobs in Delaware, take 30,000 gas-powered cars off the road annually, and lead to 154,000 fewer tons of carbon dioxide emissions per year.[ii] But only the very rich and famous can afford to buy a Karma sedan, according to Consumer Reports.

Electric vehicles have other problems than those we traditionally hear and that are cited above. These vehicles are not very environmentally friendly; from the manufacturing process to produce them, to the electricity used to charge the batteries, to the batteries themselves. The raw materials for the batteries are mined in Canada, refined in China and packaged in Japan. When the batteries run out of their useful life, they have to be disposed as toxic waste.[iii] Further, the electricity needed to power the batteries is predominantly produced from fossil fuels, which negates the reductions in carbon dioxide emissions supporters of electric vehicles argue they are trying to attain. In the United States, between 65 and 70 percent of our electricity is produced from fossil fuels—a share which the EIA expects to remain intact as far out as 2040. In addition to using fossil fuels to power the electricity, the global warming impact of manufacturing electric cars is about twice the comparable impact of conventional vehicles. According to a study by The Norwegian University of Science and Technology, electric car factories emit more toxic waste than conventional car factories.[iv]

Car dealers are now hedging their bets in the electric car arena on more-advanced hybrids, just as EIA is now forecasting. Ford, for example, expects hybrids and electrics to account for up to 25 percent of its sales by 2020 with hybrids making up most of that figure. Toyota has expressed similar views. Hybrids offer consumers more flexibility since they can be filled up at normal gasoline stations and drivers do not need to worry about charging stations and vehicle range.[v]

[v] The Motley Fool, The Promise and Problems of Electric Cars, April 22, 2012, http://www.fool.com/investing/general/2012/04/22/the-promise-and-problems-of-electric-cars.aspx