According to the Energy Information Administration (EIA), natural gas pipeline capacity from the United States to Mexico will likely double over the next three years, further increasing the U.S. capability to export natural gas to that country. Currently, the United States-to-Mexico pipeline capacity is 7.3 billion cubic feet per day, serving primarily the northeast and central parts of Mexico.[i]

The increase in U.S. exports of natural gas to Mexico and the need for additional pipeline capacity is due to Mexico’s increased use of natural gas for power generation, its declining domestic production and the lower cost of U.S. pipeline gas compared with the alternative of importing liquefied natural gas (LNG). 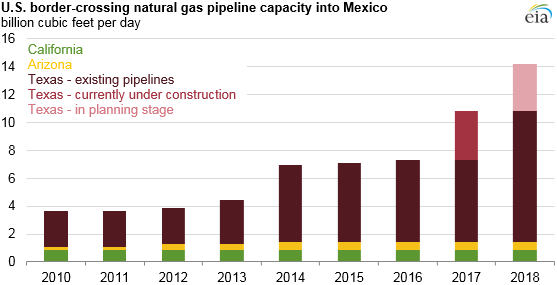 U.S. pipeline exports to Mexico are displacing Mexico’s LNG imports or fueling new electric generation facilities. The Los Ramones Phase I pipeline (capacity of 2.1 billion cubic feet per day) completed in 2014, displaced LNG imports at the Altamira terminal in Central Mexico with U.S. shale gas from the Eagle Ford play in Southern Texas. LNG imports at Altamira were 50 percent lower through October of this year than they were in 2015. The completion of Phase II South of the Los Ramones pipeline (capacity of 1.4 billion cubic feet per day) is expected to displace LNG imports at the Manzanillo terminal in the Central region of Mexico, which has been experiencing natural gas shortages and has had to purchase additional LNG. 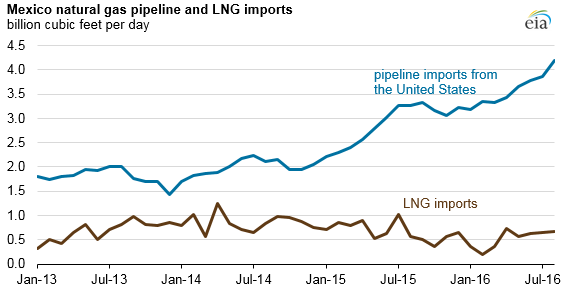 Mexico is also expanding its domestic natural gas pipeline capacity with 12 additional pipelines having a total capacity of 9.7 billion cubic feet per day and adding over 3,200 miles of new pipeline throughout Mexico. These pipelines are part of Mexico’s energy ministry’s (SENER) five-year plan for expansion of its natural gas pipeline infrastructure. According to SENER’s July 2016 update, contracts have been awarded for seven of the 12 projects. SENER expects a widening gap between domestic gas production and natural gas demand through the end of the decade, making room for additional U.S. imports of natural gas.[iii]

Mexico needs to import natural gas to supplement its own domestic gas production and to meet its electric sector demand. Since natural gas pipeline imports from the United States are less expensive than LNG, Mexico is also displacing some of its LNG imports with U.S. natural gas. Beginning in April 2015, Mexico became the largest importer of U.S. natural gas, replacing Canada, whose imports of U.S. natural gas have been declining since 2012.