The International Energy Agency released its latest World Energy Outlook on November 16, 2016, and despite including the country pledges to the Paris Agreement, the outlook does not produce the 2 degree Centigrade target that was the goal of the Paris meeting.[i] In order to meet that goal, the energy sector must be carbon neutral by 2100. The graph below shows that carbon neutrality is not achieved.

Today, fossil energy represents 81 percent of global energy demand and if all the pledges are implemented, IEA expects the fossil fuel share to be 74 percent in 2040.[ii] By 2040, global energy demand grows by 30 percent, global oil consumption grows by almost 12 percent, global natural gas demand grows by 50 percent, and energy-related carbon dioxide emissions increase at an average annual rate of 0.5 percent, down from 2.4 percent in a scenario without the pledges from the Paris Agreement. This reduction limits the rise in temperature to 2.7 degrees Centigrade according to the U.N. Intergovernmental Panel on Climate Change’s models.

Carbon dioxide emissions grow despite a greater share of renewables in the electric generation mix and a large increase in the number of electric vehicles. By 2040, the renewable share of generation increases to 37 percent from 23 percent today and the number of electric vehicles increases by over 100 percent to 150 million. Almost 60 percent of all new generating capacity between 2015 and 2040 is renewable and by 2040, most renewable energy is competitive with traditional technologies without subsidies.

IEA expects global oil demand to increase to 103.5 million barrels per day in 2040 from 92.5 million barrels per day in 2015—an annual average growth rate of 0.4 percent.[iii] Nearly all of the projected growth in oil demand is due to freight, aviation and petrochemicals–sectors where alternatives are limited. The IEA assumes that increases in efficiency of automobiles, biofuels, and electric vehicles will cause oil demand for passenger vehicles to decline despite the vehicle stock nearly doubling. Sales of electric vehicles increase by a factor of 115 due to the addition of more models and a reduction in cost compared to internal combustion vehicles.

The graph below shows net oil imports (oil imports minus oil exports) for the United States, the European Union, China and India in 2014 and 2040. The graph shows the reduction of imports within each country in 2040 due to efficiency improvements, using renewable energy (biofuels), switching to electric and natural gas vehicles, and increasing oil production. Both China and India increase their oil imports, but the United States and the European Union reduce their levels.[iv] IEA expects India to become the leading source of growth in oil consumption and China to overtake the United States as the largest oil consuming country in the early 2030s.

The IEA warns that a shortfall in oil production could result in a few years’ time if low upstream oil investment continues. The agency notes that conventional crude oil resources including tight oil and oil sands approved for development in 2015 declined to the lowest level since the 1950s and continued that trend in 2016. If investment does not pick up in 2017, it is unlikely that the projected level of supply and demand in the early 2020s can be met without the start of a new boom/bust cycle for the oil industry.

Nuclear, renewable energy, and natural gas account for over 80 percent of the increase in global demand to 2040.[v] Natural gas’ role is increased by a more flexible global gas market with a doubling of trade in liquefied natural gas (LNG). IEA expects natural gas to overtake coal in the global energy mix in the 2030s, growing at an average annual rate of 1.5 percent.

According to the IEA, LNG will become the dominant fossil fuel in international markets by 2035 as more and more countries switch from oil to natural gas. Natural gas consumption is growing across the world except in Japan, and because there is plenty of supply, prices are competitive.[vi] North America, Australia, and East Africa become major natural gas exporting regions. LNG’s share of the global long-distance gas trade increases from 42 percent in 2014 to 53 percent in 2040. (See graph below.) 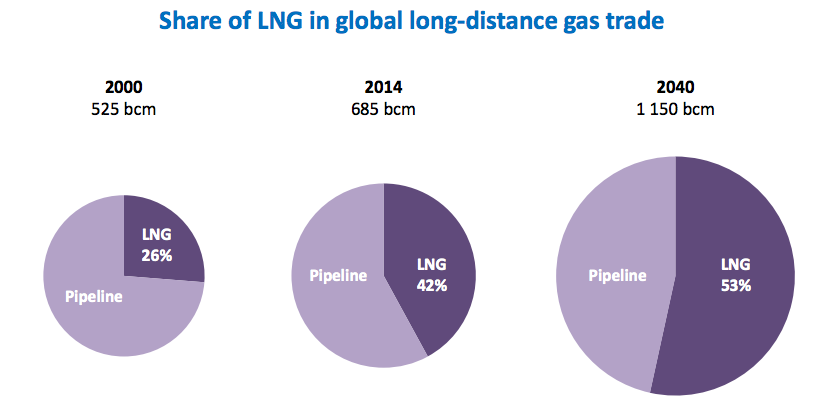 China is the largest coal producer and consumer in the world. IEA assumes that its coal use likely peaked in 2013 barring a poor year for hydropower—China’s main form of renewable energy. Despite IEA’s belief that coal consumption is on the decline in China, the country still uses a great deal of coal—3 to 4 times as much as the United States and generates almost 70 percent of its electricity using coal. Coal consumption in India and Southeast Asia is expected to continue to increase as these countries improve their economies and electrify more of their countries. However, overall, IEA projects that the coal consumption will grow at an average annual rate of 0.2 percent per year. The graph below shows India and Southeast Asia increasing their coal consumption between 2014 and 2040, while the United States, the European Union and China decrease their coal consumption.

Even with the pledges from the Paris Agreement, which was ratified on November 4, 2016, fossil fuels are expected to represent 74 percent of global energy demand in 2040. This is despite renewable energy making major in roads and becoming competitive in many cases with conventional technologies by 2040 in the IEA forecasts. Countries such as India and Southeast Asia will continue to consume coal to improve their economies and electrify their countries. Although developing countries account for nearly all of the 30 percent increase in energy demand by 2040, over a half a billion people will still be without access to electricity (down from 1.2 billion worldwide today)—mostly concentrated in rural areas in the Sub-Saharan Africa.