The Energy Information Administration recently reported that U.S. crude oil proved reserves[1] rose for the fourth consecutive year in 2012, increasing by over 15 percent to 33 billion barrels.[i] U.S. crude oil and lease condensate[2] proved reserves on January 1, 2013 were the highest since 1976, and the increase of 4.5 billion barrels in 2012 was the largest annual increase since 1970. The increase in crude oil reserves was due to increased exploration for liquid hydrocarbons and improved technology for developing shale oil plays incentivized by relatively high oil prices. The average price of oil remained relatively constant in 2012 at an average daily spot price of $95 per barrel. Natural gas reserves, on the other hand, declined in 2012 by 7.5 percent from a very high level the year before. Lower prices for gas meant businesses were dis-incentivized from exploring and drilling for natural gas when compared to oil.

The large gain in U.S. oil reserves was due in part to shale oil (tight oil) plays, which contain conventional oil that is accessed through hydraulic fracturing and horizontal drilling. Shale oil accounted for 7.3 billion barrels (22 percent) of the total proved reserves of crude oil and lease condensate in 2012.

Proved crude oil reserves in the Eagle Ford shale oil play in southwest Texas surpassed those in the Bakken Formation of North Dakota to become the largest shale oil play in the United States. Texas was responsible for the largest volumetric increase (3.0 billion barrels) in proved oil reserves because of development in the Permian and Western Gulf basins. North Dakota had the second-largest increase (1.1 billion barrels) from development of the Bakken and Three Forks formations in the Williston Basin. In 2012, North Dakota’s proved reserves of crude oil and lease condensate exceeded those of Alaska and California, making North Dakota the second largest oil reserve state in the United States. Collectively, North Dakota and Texas accounted for 92 percent of the net increase in total U.S. proved oil reserves in 2012. The federal offshore region of the Gulf of Mexico added 137 million barrels (3 percent of the net increase) of new reserves. 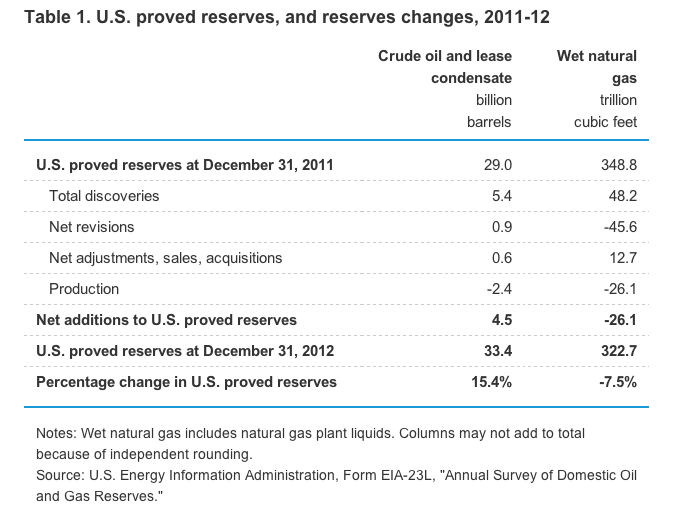 [1] Proved reserves are volumes of oil that geological and engineering data demonstrate with reasonable certainty to be recoverable in future years from known reservoirs under existing economic and operating conditions.

Oil and Gas Production on Federal Lands Still a Disappointment