The Energy Information Administration reports that the United States has been importing an average of 869 thousand barrels a day of oil from OPEC member Venezuela during the first 6 months of this year. Venezuela ranks fourth as a supplier of U.S. oil imports after Canada, Saudi Arabia, and Mexico. But, the United States could have gotten these oil imports from our northern neighbor, Canada, as early as next year if the Obama Administration had approved the Keystone XL pipeline when first requested to do so. The proposed Keystone pipeline is designed to move 830 thousand barrels per day of oil from Canada to refineries on the U.S. Gulf Coast where Venezuela crude oil arrives by tanker. Both crude oil types are heavy oils that the Gulf Coast refineries are designed to handle. But instead of enhancing North American trade relations, the Obama administration is encouraging its oil trade with Venezuela, whose oil industry is government-owned using its oil wealth to gain votes from the poor by providing free medical care, public housing and other government programs.[i] 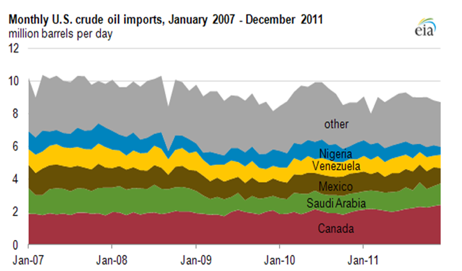 In 2010, Venezuela’s net oil exports totaled 1.7 million barrels per day, the eighth-largest in the world and the largest in the Western Hemisphere. While Venezuelan crude oil production increased in 2011 by about 100,000 barrels per day, equaling its 2009 production levels, oil production has declined since 2001 by over 25 percent because of production declines at older fields, maintenance issues, and the need for additional foreign investment.[iii] Because of increasing domestic oil consumption of almost 80 percent since 2001,[iv] net oil exports have also declined. Oil now represents 47 percent of Venezuela’s energy consumption compared to 36 percent a decade ago because of government-provided liquid fuel subsidies.[v] 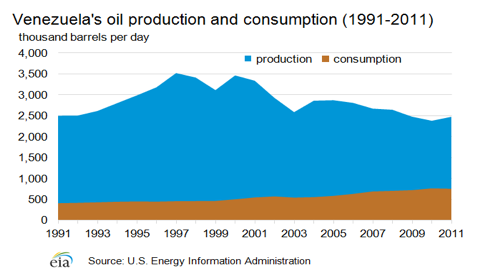 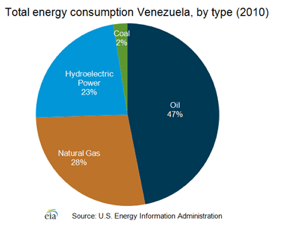 Venezuela created Petroleos de Venezuela S.A. (PdVSA), its state-run oil and natural gas company, in the 1970s, which accounts for a significant share of the country’s GDP, government revenue, and export earnings. Venezuela took steps to liberalize the petroleum sector during the 1990s, but since Hugo Chavez’s election in 1999, Venezuela has increased public participation in the oil industry, raising tax and royalty rates on new and existing projects and mandating majority PdVSA ownership of all oil projects.

In 2002, almost half of PdVSA’s employees took part in a strike against the rule of President Chavez, who in turn had 18,000 workers fired and overhauled PdVSA’s internal organization to solidify government control. In 2006, Chavez nationalized oil exploration and production in Venezuela, mandating a 60-percent minimum PdVSA share in projects. Most international oil and gas firms complied with the new arrangements but those that did not were forcibly taken over. The Venezuelan government is also increasing pressure on foreign operators to increase investment in order to offset production declines.

Venezuela’s conventional crude oil is heavy and sour, requiring specialized domestic and international refinery processing. In the Orinoco Belt in central Venezuela, the country has extra-heavy crude oil and bitumen deposits, which the U.S. Geological Survey estimates contains 513 billion barrels of recoverable crude oil. In 2005, PdVSA began the ‘Magna Reserva’ project to quantify the region’s reserves, resulting in the upgrading of Venezuelan reserve estimates by more than 100 billion barrels.

Venezuela exports a large share of its oil to the United States because geographic proximity enhances export profitability and because refineries on the U.S. Gulf Coast are specifically designed to handle heavy Venezuelan crude. Venezuela is the fourth largest supplier of imported crude oil and petroleum products to the United States behind Canada, Saudi Arabia, and Mexico. But, recently, Venezuela has diversified its crude oil export destinations with China becoming one of the fastest growing importers of Venezuelan crude oil due to China’s oil for loan deals. China provided a loan of $4 billion to Venezuela to finance infrastructure projects in exchange for future oil supplies, and since 2007, has lent Venezuela $42.5 billion with with promises of oil supplies as repayment.[vi] This has enabled the Chavez government to spend borrowed money on vote-getting projects such as new housing and free appliances, as well as subsidizing some of the cheapest gasoline prices in the world, which in August were 9 cents per gallon.[vii]  In 2011, China imported 230,000 barrels per day of crude oil from Venezuela, compared with 19,000 barrels per day in 2005.  The commitments to China for repayment of the enormous loans Venezuela has received means the volume of oil exports to China will increase significantly. 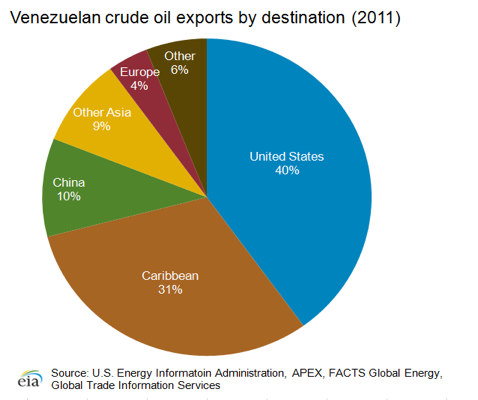 Canada produced 3.6 million barrels per day of oil in 2011, an increase of nearly 200 thousand barrels per day from 2010. Oil production in Canada comes from three principal sources: the oil sands of Alberta, the conventional resources in the broader Western Canada Sedimentary Basin, and the offshore oil fields in the Atlantic. Alberta was responsible for almost 75 percent of Canadian oil production in 2011. 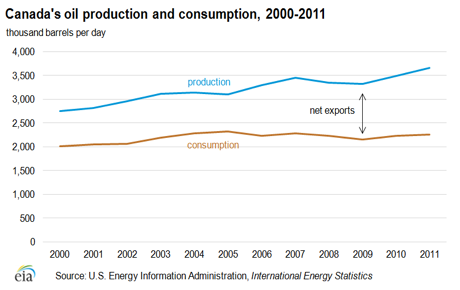 The oil sands are permeated with bitumen, which is a form of petroleum in solid or semi-solid state that is typically found blended with sand, clay, and water. Petroleum is extracted from oil sands by either traditional pit mining on the surface or in-situ production underground. Once extracted, the petroleum or bitumen, a heavy, viscous type of crude oil, is diluted with condensate or other light oils or upgraded using processing units into a light, sweet “synthetic” crude oil.

Because of Canada’s large oil reserves, TransCanada proposed an addition to its Keystone pipeline system, the Keystone XL, which would move oil from Alberta to U.S. Gulf Coast refineries, with a capacity of 830 thousand barrels per day. Because it would cross an international border, a presidential permit must be obtained from U.S. authorities indicating that the pipeline is in the national interest. After the U.S. State Department denied TransCanada’s original application, TransCanada reapplied for a presidential permit in May 2012. The original application was denied ostensibly because of risks that pipeline spills might pose to the Ogallala aquifer in Nebraska’s Sand Hills region. However, its rejection came after weeks of protests by opponents of Canadian oil sands which included many celebrities.[ix] The new application provides alternative routes through Nebraska, and according to the State Department, a decision is expected in the first quarter of 2013. If the permits are granted, TransCanada expects to begin operating the pipeline in 2015.

The Obama Administration did express approval for a shorter section to connect Cushing, Oklahoma with the Texas refining sector (the Gulf Coast Pipeline Project) to resolve some of the infrastructural constraints that have led to a glut of domestic oil at the Cushing hub, although White House approval for interstate oil pipelines is not necessary. Construction on the Gulf Coast Pipeline Project commenced in August 2012 following final approval of its permits by the U.S. Army Corps of Engineers, and the company expects an in-service date of mid-to-late 2013. Although the pipeline has an initial capacity of 700 thousand barrels per day, it will have the potential to expand to 830 thousand barrels per day in keeping with the connection to the Keystone XL pipeline if approved in early 2013.

Due to delays and indecision from the United States, Canadian companies are pursuing other outlets for Alberta’s oil sands as mentioned above and demonstrated by the Chinese National Offshore Oil Company’s $15.5 billion bid for Nexen Energy.  Enbridge is pursuing the Northern Gateway pipeline project that would connect Alberta’s oil sands to a deepwater port in British Columbia with a capacity of 525 barrels per day and Kinder Morgan has proposed to expand its existing Trans Mountain system by building a second pipeline within the same right-of-way, increasing Trans Mountain’s capacity to 850 thousand barrels per day. Enbridge has already filed regulatory applications and is in the midst of public consultations and government review. The completion of either or both of these projects would create a new export outlet for Canadian oil sands with Asian economies in the Pacific Basin.

It seems that the decision of whether to buy oil from Canada or Venezuela would be simple for the United States –a friendly neighbor in Canada or a state-controlled oil company in a country led by a quasi-dictator. But, the Obama Administration by its actions is choosing Venezuelan oil, which must come by tanker, rather than additional Canadian oil by pipeline. This is forcing our neighbor, ally and largest trading partner to seek out the Chinese and other Asian markets for their oil sands production, and the Chinese are welcoming Canada’s overtures.[x] Regardless of what we do, neither oil exporting country is placing its bets solely on us. They are diversifying their oil markets to Asian buyers such as China to buy their petroleum exports.  And, China is not averse to using heavy Canadian oil or heavy Venezuelan oil, nor is it worried about potential oil spills from either a pipeline crossing Canada or from oil tankers traversing the Pacific Ocean.  Energy feeds China’s economic growth which is an essential tenet of its vision for its country.

As stated by Ms. Jaffe, executive director for energy and sustainability at the University of California, Davis, Graduate School of Management: “If the demand for oil is there, the oil will find its way to the market, with or without the Keystone XL pipeline. If the pipeline continues to be blocked, chances are the oil will move by train or truck, creating a higher probability of industrial accidents than a pipeline—as well as additional greenhouse gases.”[xi]

Will the Middle Class Feel the Pain of Obama's Energy Freeze?