Gas prices were already ticking upward before Egypt disintegrated into political turmoil, but the Obama Administration is accelerating that trend by 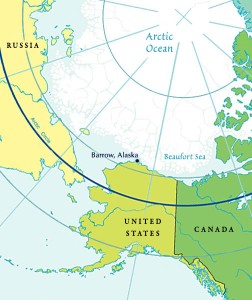 not issuing permits for domestic energy development and exploration.

Today, Royal Dutch Shell announced that they would postpone their arctic drilling project in the Beaufort Sea – a region estimated to have billions of barrels of oil – because they cannot secure the necessary permits.  We can add this company to the list of those wishing to do business in the United States, but cannot as a result of regulatory green tape.

To date, Shell has invested over $3 billion on their Arctic project. Part of that investment was $2.2 billion for leases. That money was given to the U.S. government and provided Shell the opportunity to look for oil. Despite that agreement, Shell has not been able to break ground because they have not been issued the necessary permits from the Environmental Protection Agency.

As a result, Shell will no longer pursue or develop their Arctic portfolio for the rest of the year. Instead of Shell increasing our domestic supply of oil, creating good paying jobs, and paying millions in taxes and fees, we will be more reliant on foreign suppliers.

Obama Administration claims they understand that we need energy but continues to resolutely stand in the way of developing reliable and affordable energy.   As we noted previously, oil and gas companies will search for opportunities to develop natural resources in countries that will have them.

Our hope is that the Obama Administration realizes soon that energy is the capacity to do work and access to affordable and reliable energy helps the economy function efficiently.  In other words, the money we save from using affordable energy can be invested and used to grow other areas of the economy.

Will Unrest in Middle East Finally Awaken Washington to Impacts of its American Energy Embargo?