Last week, IER posted an analysis on the additional royalties ($24.5 billion) the federal government could gain if it followed the oil producing states’ example in permitting and leasing, which has led to massive increases in oil and natural gas production, making the United States the world’s leader in both oil and natural gas production.[i] As was mentioned in that article, between fiscal years 2010 and 2014, oil production on non-federal (state and private) lands increased 89 percent due to the more favorable regulatory environment. In that analysis, North Dakota, the second largest oil producing state in the nation, was noted for its economic growth of 6.3 percent in 2014, the highest in the nation, and its increase in jobs, ranking first in employment growth in the nation.

North Dakota has not stopped there. Recognizing that lower oil prices means less capital for oil companies to invest in drilling and exploration, the state lowered its extraction tax from 6.5 percent to 2 percent[ii]. As a result, oil companies, using hydraulic fracturing, drilled 586 wells using 72 drilling rigs—which, while less than half the number it had in 2014 are expected to realize around $120 million in total tax savings on those wells, which is on the first 75,000 barrels produced. The results have been remarkable. In March of 2015, North Dakota produced 22 percent more oil than it did in March 2014. In February 2015, which is when the 2-percent tax went into effect, the state produced 23 percent more oil than it did in February 2014.[iii] Despite the lower tax rate, North Dakota will still collect about $1 billion in oil revenue on those wells over the next biennium. In addition, North Dakota kept jobs it would have otherwise lost and investment that might have gone elsewhere. 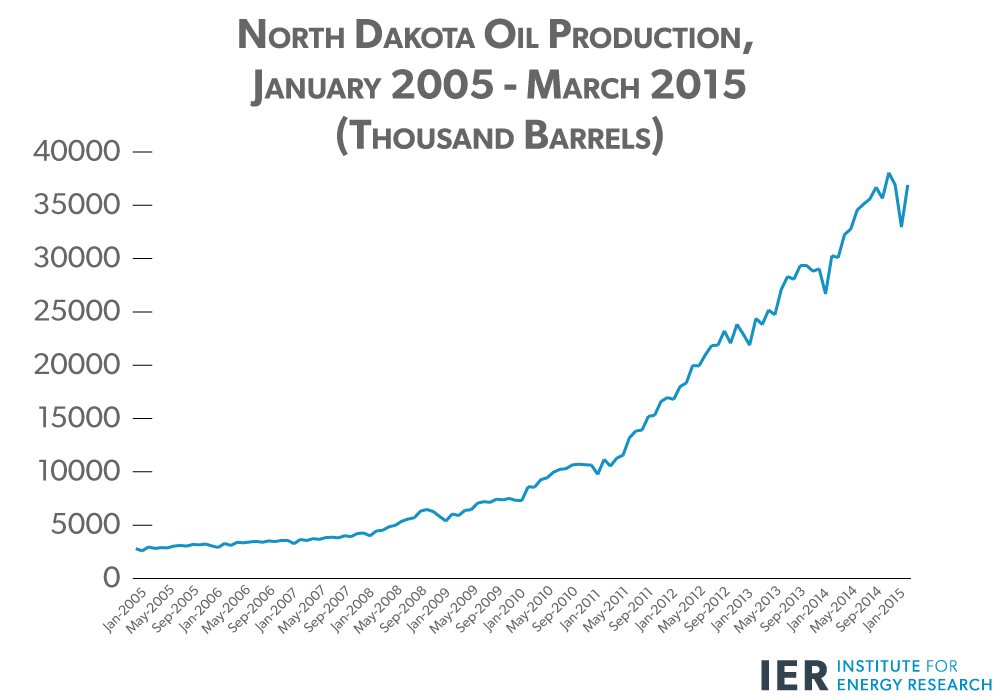 The state established the price trigger so that oil companies would keep producing oil should oil prices drastically decline, as they did. The trigger on the extraction tax, however, ends at the end of June. The “trigger” lowered the extraction tax from 6.5 percent to 4 percent when the wellhead price of crude oil fell to $52.50 a barrel and lowered it to 2 percent in certain other circumstances.[iv] Beginning January 1, 2016, the extraction tax will be set at 5 percent, making it easier to forecast oil tax revenues than using a “trigger” based on oil prices. That tax rate will increase to 6 percent if crude oil prices average above $90 a barrel for three consecutive months.[v] North Dakota also has a 5-percent gross production tax, which remains unchanged.[vi]

Capital and investment can – and do – move to places where companies can best afford to do business. Clearly, companies have decided that federal lands are the least desirable places to invest, based upon the results of the last 5 years, as noted earlier. Yet, groups and politicians are clamoring for higher payments on federal lands, despite direct evidence that even at today’s rates of payment, the federal lands are a bad place to do business. In many cases, the biggest proponents of increasing costs on businesses on federal lands are actually opponents of further production on federal lands. Raising costs for businesses to operate on lands that are already unattractive from an economic or business standpoint simply serves as a means to stop the development they already oppose. This is a classic “red herring,” and our analysis of the revenues that are already foregone on federal lands by bad leasing policies shines a light on the weakness of that argument.

North Dakota has recognized that the benefits of energy investment go well beyond direct revenues, to include jobs, infrastructure and new economic opportunities. They wisely chose to accommodate additional investment by adjusting government take, and still created new revenue and new energy. The federal government should look closely at North Dakota’s example and compare its own performance. If the federal government were a company forced to compete, it would go out of business with its current policies. The American people deserve better, and North Dakota is showing the way.

Selection Bias in the Social Cost of Carbon