When energy prices in the United States were high, the nation saw an exodus of companies moving offshore to obtain lower operating costs. Those industries have been slowly moving back, as hydraulic fracturing has dramatically lowered the cost of natural gas in the United States and allowed natural gas generation to compete with coal in the electricity sector. Unfortunately, President Obama’s regulations are going to make energy much more expensive in the United States, as his so-called “Clean Power Plan” and his methane rule get implemented.

The so-called Clean Power Plan is expected to decrease carbon dioxide emissions in the generating sector by 32 percent from 2005 levels by 2030. To do this, massive amounts of coal-fired generating capacity will be shuttered and wind and solar power will be built in their stead—technologies that cost 2 to 4 times more than the coal capacity that is being shuttered. According to the Energy Information Administration (EIA), residential electricity prices are expected to be 16 percent higher in real prices than today due to the proposed regulation and others imposed on the generating sector by EIA.

These regulations and others promulgated by President Obama’s EPA will increase the cost of energy to Americans. President Obama is finalizing these regulations so that he can tell the world how he intends to reduce U.S. greenhouse gas emissions at the United National Climate Conference in Paris in December. However, the reductions that the United States makes will be insignificant to any realized temperature change and an equivalent amount of emissions will be released by China in a matter of days—for essentially no net gain globally.

In 2005, when natural gas prices were almost 50 percent higher than they are today, there was a general exodus of companies leaving the United States and moving their manufacturing operations to Asia to reduce costs. However, since then, hydraulic fracturing has enabled the extraction of natural gas from shale formations, lowering the price of natural gas and increasing its production substantially. An accounting firm, PricewaterhouseCoopers, believes that these lower U.S. energy prices could result in one million more manufacturing jobs as firms build new factories here. Companies such as Dow Chemical and Vallourec, a French steel-tubes firm, have announced new investments in America to take advantage of low gas prices and to supply extraction equipment.[ii]

Examples of firms bringing back manufacturing operations to the United States range from tiny firms to large firms, such as General Electric, which moved manufacturing of washing machines, refrigerators and heaters from China to a factory in Kentucky, which at one time had been expected to close. Another firm, Caterpillar, is opening a new factory in Texas to make excavators, but it still plans to expand its research and development activities in China.

A survey of American manufacturing companies by the Boston Consulting Group in April 2012 indicated that 37 percent of companies with annual sales above $1 billion said they were planning or actively considering shifting production facilities from China to America. Forty-eight percent of the very biggest firms with sales above $10 billion indicated that they would bring production facilities to America. The Massachusetts Institute of Technology looked at 108 American manufacturing firms with multinational operations and found that 14 percent of them had firm plans to bring some manufacturing back to America and one-third were actively considering such a move. Another study by the Hackett Group, a Florida-based firm that advises companies on offshoring and outsourcing, received similar results.

It may be ironic, but Chinese companies are now looking to manufacture in the United States. Keer, a textile company headquartered outside of Shanghai, China, is building yarn manufacturing lines in the Carolinas, bringing more than 500 jobs, due to low costs for energy, land, and cotton. The Carolinas at one time had been huge textile centers. Springs Mills in Lancaster once employed close to 20,000 people before the last textile factory closed in South Carolina in 2007. Lancaster County lost 11,000 textile jobs from 1995 to 2007. The greater Charlotte-Gastonia-Rock Hill region lost about 26,000 jobs at textile mills in the past 20 years.[iii]

But low energy prices and American ingenuity have brought manufacturing back to this country. However, all this is likely to change as President Obama’s regulations go into effect, making electricity and natural gas prices escalate, forcing companies to accept higher domestic operating costs or move offshore.

In the longer term, advanced manufacturing techniques will likely alter the economics of production, making it far less labor-intensive. Robots, for example, are already making a difference lowering the share of labor in total costs. Cheaper, more user-friendly and more dexterous robots are currently spreading into factories around the world, but these machines need energy to fuel them. And if President Obama implements regulations to raise energy costs, manufacturers will need to seek lower energy prices elsewhere, which will decrease the number of jobs in this country.

Early in August, EPA announced its final rule for the so-called Clean Power Plan, which reduces 32 percent of carbon dioxide emissions from the generating sector by 2030 from 2005 levels. This and other rules affecting the generating sector that have been finalized will shutter 90 gigawatts of coal-fired capacity and other fossil fuel technologies, and direct the construction of wind and solar units instead, despite the fact that it is cheaper to keep existing generating plants operating rather than building new plants. As a result, EIA expects residential electricity prices to be 16 percent higher in 2030 than they are today.

The use of low cost natural gas in the generation sector, displacing coal generation, has already reduced carbon dioxide emissions in the sector by 15 percent from 2005 levels. But, that is not a sufficient reduction for EPA. EPA wants the United States to reduce its carbon dioxide emissions from the electric generating sector by 773 million metric tons, and according to the International Energy Agency, while at the same time, China is expected to increase its carbon dioxide emissions by over 12,000 million metric tons.[iv] The U.S. reduction is expected to only reduce temperatures by 0.019 degrees Centigrade in 2100—a miniscule amount.[v]

Also in August, the EPA finalized its methane rule, requiring oil and gas companies to reduce methane emissions by 40 to 45 percent from 2012 levels by 2025, despite the fact that the industry has already significantly reduced methane emissions while substantially increasing production. 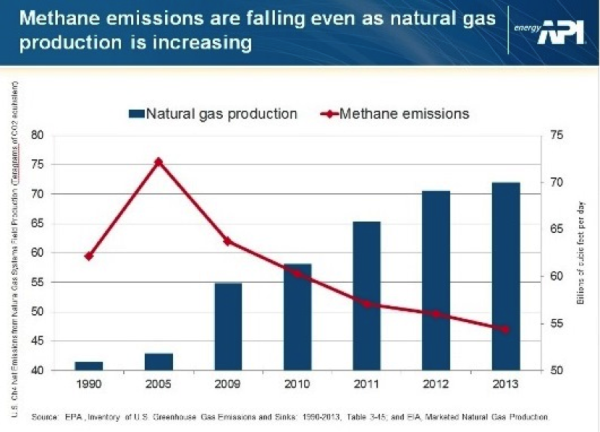 EPA has finalized the so-called “Clean Power Plan” and the methane rule, but other regulations are still in the works. The proposed ozone rule, for example, is expected to be the most costly regulation costing the economy $1.7 trillion in lost GDP through 2040.   [vi]

The National Ambient Air Quality Standard (NAAQS) for ground-level ozone is an outdoor air regulation established by EPA under the Clean Air Act. Ozone is a naturally occurring gas composed of oxygen molecules. Ground-level ozone occurs both naturally and results from chemical reactions between nitrogen oxides and volatile organic compounds, which are emitted from industrial facilities, power plants, vehicle exhaust, and chemical solvents.

These new ozone regulations proposed by EPA will cause hundreds of counties across the country to be in violation of air laws. Out of compliance on ozone means less development, fewer jobs and the potential for significant and long-term damage to the economy. What’s worse, the new proposed ozone rules are being considered while the previous ozone regulations from 2008 have not been entirely implemented. States, counties and communities across the country are working to meet the current requirements, and a new stricter standard would result in more communities out of compliance.

According to a February 2015 economic study by the National Association of Manufacturers, a 65 parts per billion standard could reduce GDP by $140 billion, result in 1.4 million fewer jobs, and cost the average U.S. household $830 in lost consumption – each year from 2017 to 2040.[vii]

President Obama is making energy prices escalate due to stringent environmental regulations being promulgated by the EPA. Due to the timing of these regulations, most of the price increases will not be seen by the public until his second term is up. Nonetheless, the headway the United States made to bring manufacturing back to America is being threatened. The result will be a loss of jobs that we cannot afford.